Background: There is a paucity of data on the outcome following the treatment for acute lymphoblastic leukemia (ALL) from developing countries. Materials and Methods: Two hundred and thirty-eight consecutive patients with ALL < 30 years of age diagnosed between January 2005 and December 2011 were analyzed retrospectively. Patients were treated modified Berlin, Frankfurt, and Munster 95 protocol. Event-free survival (EFS) was calculated using Kaplan-Meier survival analysis and variables were compared using log-rank test. Results: The EFS was 63.4% at a median follow-up was 32.7 months. On univariate analysis National Cancer Institute (NCI) risk stratification, sex, white blood cell count, day 8 blast clearance, and income were significantly associated with EFS. However, on multivariate analysis only female sex (P = 0.01) and day 8 blast clearance (P = 0.006) were significantly associated with EFS. Seventy-four of 238 (31%) patients had recurrent leukemia. The common sites of relapse were bone marrow in 55/74 (75%) patients and central nervous system in 11/74 (20%) patients. Conclusion: Compared to western data, there was an increased proportion of NCI high-risk patients and T-cell immunophenotype in our study. There has been an improvement in outcome of patients with ALL at our center over the last 2 decades. Female sex and clearance of blast in peripheral blood by day 8 of induction was associated with better EFS.

There is a paucity of data on the outcome following the treatment for acute lymphoblastic leukemia (ALL) from developing countries.

The EFS was 63.4% at a median follow-up was 32.7 months. On univariate analysis National Cancer Institute (NCI) risk stratification, sex, white blood cell count, day 8 blast clearance, and income were significantly associated with EFS. However, on multivariate analysis only female sex (P = 0.01) and day 8 blast clearance (P = 0.006) were significantly associated with EFS. Seventy-four of 238 (31%) patients had recurrent leukemia. The common sites of relapse were bone marrow in 55/74 (75%) patients and central nervous system in 11/74 (20%) patients.

Compared to western data, there was an increased proportion of NCI high-risk patients and T-cell immunophenotype in our study. There has been an improvement in outcome of patients with ALL at our center over the last 2 decades. Female sex and clearance of blast in peripheral blood by day 8 of induction was associated with better EFS.

Acute lymphoblastic leukemia (ALL) is the most frequently diagnosed malignancy in children representing around one-fourth of all cancers seen in the age group of 0-14 years.[1] Various population-based registries have shown the incidence of ALL in the Indian sub-continent to be ranging from 27% to 52% with skewed male preponderance, which may attributable to them receiving medical attention due to social norms.[2] Globally the survival of ALL has increased tremendously over the last four decades with 5 years overall survival (OS) reaching 90% in developed countries.[3] However, in developing countries like India the 5 years OS has been reported between 30% and 70% and this can be attributed to patients presenting at an advanced stage to the hospital and increased incidence of high-risk disease.[4]

There is a paucity of data on outcomes following treatment and risk factors for relapse in patients with ALL treated with a uniform protocol from India.

In this analysis, data of patients with ALL diagnosed at Cancer Institute, Chennai, India, was analyzed retrospectively. All consecutive patients with ALL < 30 years of age diagnosed between January 2005 and December 2011 and who had received at least 7 days of steroids during induction were eligible for analysis. Patients were treated on modified Berlin, Frankfurt and Munster 95 (BFM-95) protocol.[5,6] Patients were not stratified for risk. Patients received 2 courses of induction with prednisolone, vincristine, daunorubicin, and L-asparaginase initially for 1 month followed by cyclophosphamide, 6-mercaptopurine, and cytarabine for 1 month. Induction was followed by protocol-M, which consisted of 4 courses of high-dose methotrexate (HDMTX) given at a dose of 5 g/m2 once in 2 weeks along with daily 6-mercapatopurine (6-MP). Post-HDMTX phase, patients, recieved reinduction with dexamethasone, L-asparaginase, vincristine, doxorubicin, cyclophosphamide, cytarabine, and 6-thioguanine. Maintenance with daily 6-MP and weekly oral methotrexate along with pulse dexamethasone and vincristine block once in 3 months was given for 24 months. Patients more than 3 years of age received prophylactic cranial radiotherapy for a total dose of 12 Gy. Event was defined as relapse of leukemia or death due to any cause. Event-free survival (EFS) was calculated from the date of initiation of treatment to date of relapse, death or last follow-up. EFS was estimated using Kaplan-Meier method and variables were compared using the log-rank test. Statistical analysis was done using SPSS software (SPSS Inc. Released 2007. SPSS for Windows, Version 16.0. Chicago). 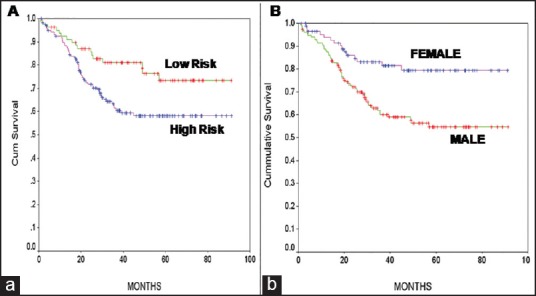 Patients were considered to have a delay in induction chemotherapy if their induction treatment exceeded 42 days in duration. There was no significant difference in EFS between patients who completed their induction on time and those who took more than 42 days to complete induction (P = 0.2).

Patients < 18 years of age were considered to be malnourished if their weight for age at diagnosis was less than the 3rd centile on World Health Organisation growth charts.[7] Of the 191 patients < 18 years of age, malnutrition at diagnosis was present in 71/191 (37%) patients. The EFS in malnourished patients was 58%, and the EFS in patients with normal nutrition was 70.4% (P = 0.06).

Patients with WBC count more than or equal to 50,000/dL at diagnosis had an inferior EFS (P = 0.04). Data on peripheral blood blast clearance on day 8 of induction chemotherapy were available in 184 patients. Fifteen of 184 patients did not clear their blast on day 8, and these patients had significantly inferior EFS compared to patients who cleared their blasts on day 8 (P = 0.00001)

Analysis of other clinical factors such as CNS or testicular involvement, urban/rural origin, mediastinal mass, immunophenotype, delay during induction, and duration of symptoms had no effect on EFS.

Table 1 provides the EFS for various parameters analyzed in the study patients.

India has a huge burden of newly diagnosed ALL due to its large population. Protocols developed in the west are used to treat patients in developing countries. The majority of our centers do not follow an approach based on risk-based treatment stratification for the treatment of ALL. This is due to lack of cytogenetic and minimal residual disease (MRD) quantification facilities. Another factor is the increased cost associated with the “High-Risk” arms of these protocols.

There is a paucity of data from developing countries where patients are treated with a uniform approach based on a single protocol. There is a need for such data so that one can plan further risk-based randomized protocols suited to local need and practice. At our center, the EFS rates have improved from 37.5% with the MCP-841 Protocol to 63.4% with the introduction of the BFM-95 protocol.[8] This improvement in survival over last 3 decades could be attributed to improved facilities to manage toxicities and complications. It is not the current practice globally to give prophylactic cranial radiation, but at our center we have continued the practice of giving prophylactic cranial irradiation because of very high rates of T-cell ALL in our population and limited facilities to treat subsequent relapses due to financial constraints. Two-thirds of our patients were in the NCI high-risk subgroup compared to a third in the BFM-95 studies. We tend to have an increased proportion of patients with T-cell leukemia and other high-risk features in our center but the reasons are unclear.[9] Only 63% of our study patients had data available on immunophenotype, this is because we did not have facilities for flow cytometry till the year 2007, diagnosis of ALL in these patients was based on morphology and immunohistochemistry. The majority of our patients are from lower social-economic strata and have high counts and infections at presentation. Patients in the high-income group had significantly better EFS on univariate analysis but not in multivariate analysis. The reason for better survival for patients in high-income group is not clear as patients in all income groups received the same treatment.

The EFS of patients who were female had blast clearance on day 8, higher income group, WBC count < 50,000/dL and those in NCI Standard Risk was significantly better on univariate analysis. However on multivariate analysis only female sex and day 8 blast clearance were significant. Currently, males do not receive more intensive or prolonged treatment than females. Whether to offer prolonged maintenance and more intense treatment in our male patients needs to be evaluated. Sex is not used a risk stratification in most current protocols for treating ALL, and the BFM-95 trial did not show a benefit in prolonging maintenance chemotherapy in males.[6] Malnutrition at diagnosis was seen in 37% of patients < 18 years of age at diagnosis. There was a trend toward inferior EFS in malnourished children (P = 0.6). Malnutrition is a significant problem in our general pediatric population and in cancer patients leads to poor tolerance to chemotherapy, frequent dose reductions, increased risk of infections and delay in completing protocol treatment, thereby compromising survival. Studies conducted in Central America have shown that malnutrition is associated with inferior survival in ALL.[11]

The EFS in our study is not comparable to the western data. However, this study provides a realistic picture of outcome in ALL patients in a nontrial setting in a tertiary cancer hospital. Risk-based treatment, MRD analysis at the end of induction, cytogenetic evaluation, and stem cell transplantation for high-risk patients will definitely improve the EFS in our population. We are currently using a risk-stratified protocol; perform a cytogenetic evaluation at diagnosis, MRD analysis at the end of induction and offer stem cell transplantation if required to all our ALL patients.

There are certain drawbacks of our study; these include the retrospective nature, nonrisk stratified treatment approach, the majority of relapsed patients did not receive salvage therapy and we could not calculate OS.