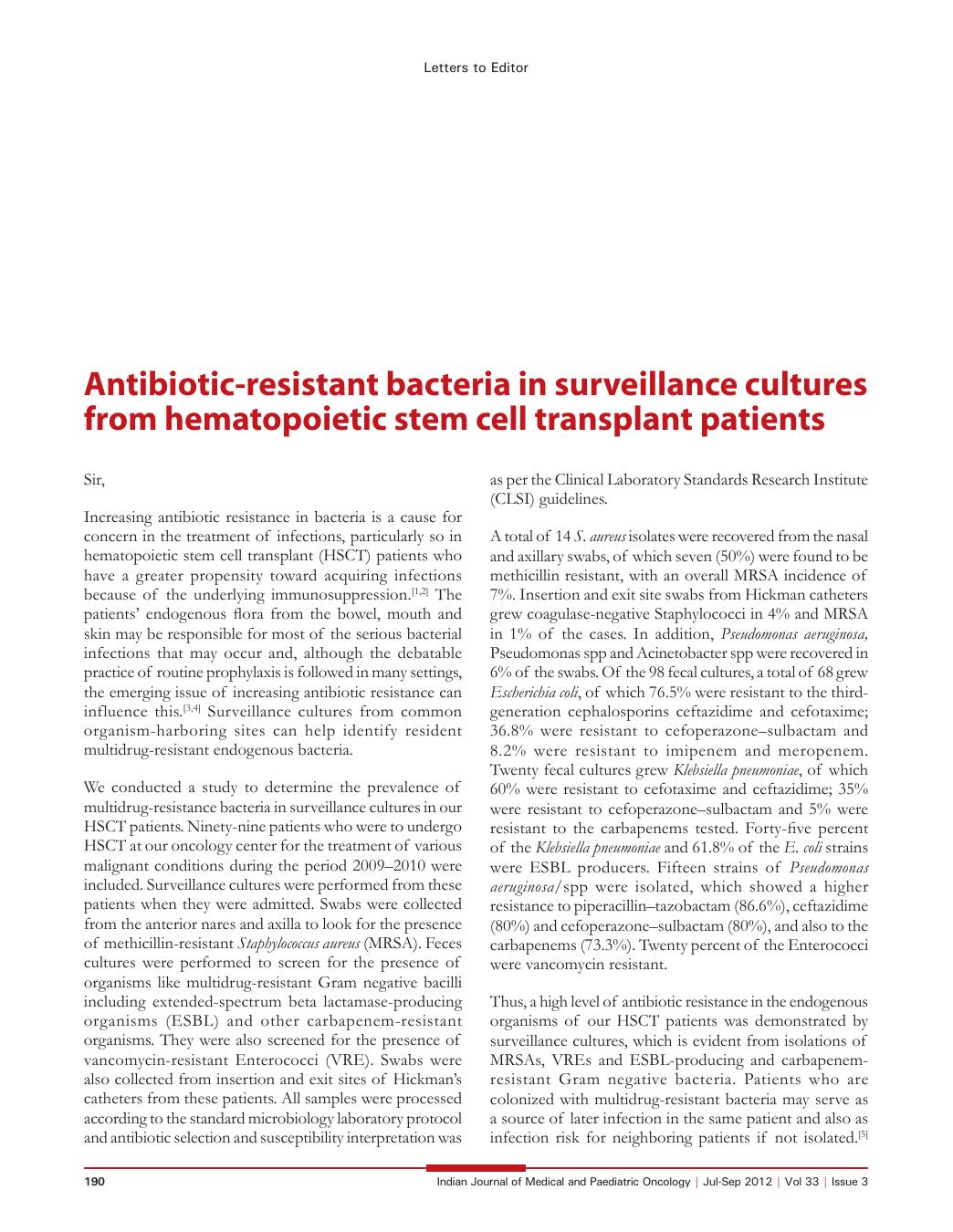 Increasing antibiotic resistance in bacteria is a cause for concern in the treatment of infections, particularly so in hematopoietic stem cell transplant (HSCT) patients who have a greater propensity toward acquiring infections because of the underlying immunosuppression.[1,2] The patients’ endogenous flora from the bowel, mouth and skin may be responsible for most of the serious bacterial infections that may occur and, although the debatable practice of routine prophylaxis is followed in many settings, the emerging issue of increasing antibiotic resistance can influence this.[3,4] Surveillance cultures from common organism-harboring sites can help identify resident multidrug-resistant endogenous bacteria.

We conducted a study to determine the prevalence of multidrug-resistance bacteria in surveillance cultures in our HSCT patients. Ninety-nine patients who were to undergo HSCT at our oncology center for the treatment of various malignant conditions during the period 2009–2010 were included. Surveillance cultures were performed from these patients when they were admitted. Swabs were collected from the anterior nares and axilla to look for the presence of methicillin-resistant Staphylococcus aureus (MRSA). Feces cultures were performed to screen for the presence of organisms like multidrug-resistant Gram negative bacilli including extended-spectrum beta lactamase-producing organisms (ESBL) and other carbapenem-resistant organisms. They were also screened for the presence of vancomycin-resistant Enterococci (VRE). Swabs were also collected from insertion and exit sites of Hickman's catheters from these patients. All samples were processed according to the standard microbiology laboratory protocol and antibiotic selection and susceptibility interpretation was as per the Clinical Laboratory Standards Research Institute (CLSI) guidelines.

Thus, a high level of antibiotic resistance in the endogenous organisms of our HSCT patients was demonstrated by surveillance cultures, which is evident from isolations of MRSAs, VREs and ESBL-producing and carbapenem-resistant Gram negative bacteria. Patients who are colonized with multidrug-resistant bacteria may serve as a source of later infection in the same patient and also as infection risk for neighboring patients if not isolated.[5] Surveillance cultures may be helpful in identifying these multidrug-resistant bacteria, which may have a bearing on further patient management.