L-asparaginase-induced cortical vein thrombosis in a child with leukemia: Can we rechallenge? 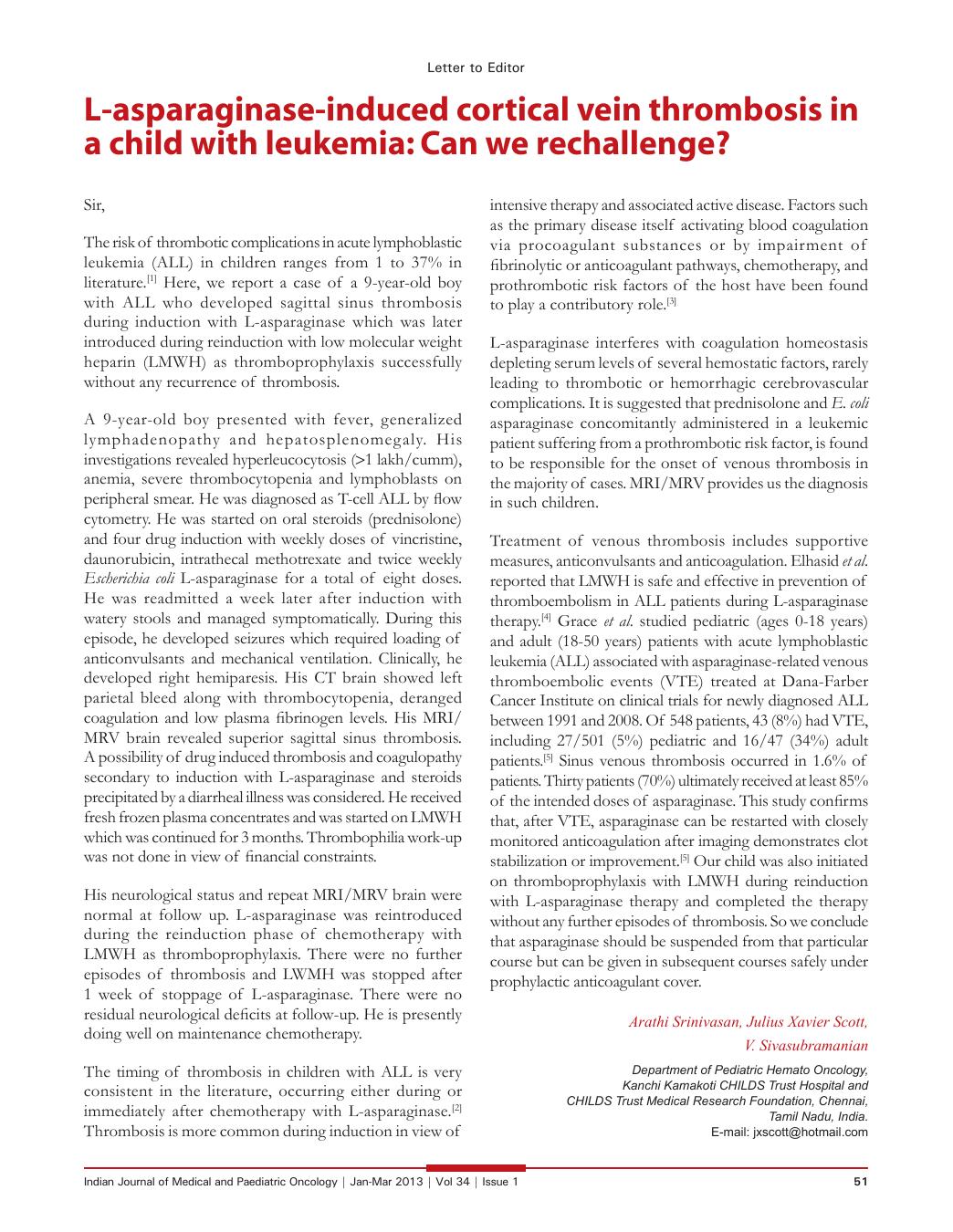 The risk of thrombotic complications in acute lymphoblastic leukemia (ALL) in children ranges from 1 to 37% in literature.[1] Here, we report a case of a 9-year-old boy with ALL who developed sagittal sinus thrombosis during induction with L-asparaginase which was later introduced during reinduction with low molecular weight heparin (LMWH) as thromboprophylaxis successfully without any recurrence of thrombosis.

A 9-year-old boy presented with fever, generalized lymphadenopathy and hepatosplenomegaly. His investigations revealed hyperleucocytosis (>1 lakh/cumm), anemia, severe thrombocytopenia and lymphoblasts on peripheral smear. He was diagnosed as t-cell ALL by flow cytometry. He was started on oral steroids (prednisolone) and four drug induction with weekly doses of vincristine, daunorubicin, intrathecal methotrexate and twice weekly Escherichia coli L-asparaginase for a total of eight doses. He was readmitted a week later after induction with watery stools and managed symptomatically. During this episode, he developed seizures which required loading of anticonvulsants and mechanical ventilation. Clinically, he developed right hemiparesis. His CT brain showed left parietal bleed along with thrombocytopenia, deranged coagulation and low plasma fibrinogen levels. His MRI/MRV brain revealed superior sagittal sinus thrombosis. A possibility of drug induced thrombosis and coagulopathy secondary to induction with L-asparaginase and steroids precipitated by a diarrheal illness was considered. He received fresh frozen plasma concentrates and was started on LMWH which was continued for 3 months. Thrombophilia work-up was not done in view of financial constraints.

His neurological status and repeat MRI/MRV brain were normal at follow up. L-asparaginase was reintroduced during the reinduction phase of chemotherapy with LMWH as thromboprophylaxis. There were no further episodes of thrombosis and LWMH was stopped after 1 week of stoppage of L-asparaginase. There were no residual neurological deficits at follow-up. He is presently doing well on maintenance chemotherapy.

The timing of thrombosis in children with ALL is very consistent in the literature, occurring either during or immediately after chemotherapy with L-asparaginase.[2] Thrombosis is more common during induction in view of intensive therapy and associated active disease. Factors such as the primary disease itself activating blood coagulation via procoagulant substances or by impairment of fibrinolytic or anticoagulant pathways, chemotherapy, and prothrombotic risk factors of the host have been found to play a contributory role.[3]

L-asparaginase interferes with coagulation homeostasis depleting serum levels of several hemostatic factors, rarely leading to thrombotic or hemorrhagic cerebrovascular complications. It is suggested that prednisolone and E. coli asparaginase concomitantly administered in a leukemic patient suffering from a prothrombotic risk factor, is found to be responsible for the onset of venous thrombosis in the majority of cases. MRI/MRV provides us the diagnosis in such children.

Treatment of venous thrombosis includes supportive measures, anticonvulsants and anticoagulation. Elhasid et al. reported that LMWH is safe and effective in prevention of thromboembolism in ALL patients during L-asparaginase therapy.[4] Grace et al. studied pediatric (ages 0-18 years) and adult (18-50 years) patients with acute lymphoblastic leukemia (ALL) associated with asparaginase-related venous thromboembolic events (VTE) treated at Dana-Farber Cancer Institute on clinical trials for newly diagnosed ALL between 1991 and 2008. Of 548 patients, 43 (8%) had VTE, including 27/501 (5%) pediatric and 16/47 (34%) adult patients.[5] Sinus venous thrombosis occurred in 1.6% of patients. Thirty patients (70%) ultimately received at least 85% of the intended doses of asparaginase. This study confirms that, after VTE, asparaginase can be restarted with closely monitored anticoagulation after imaging demonstrates clot stabilization or improvement.[5] Our child was also initiated on thromboprophylaxis with LMWH during reinduction with L-asparaginase therapy and completed the therapy without any further episodes of thrombosis. So we conclude that asparaginase should be suspended from that particular course but can be given in subsequent courses safely under prophylactic anticoagulant cover.