Multiple cutaneous malignancies in a child with xeroderma pigmentosum: A case report 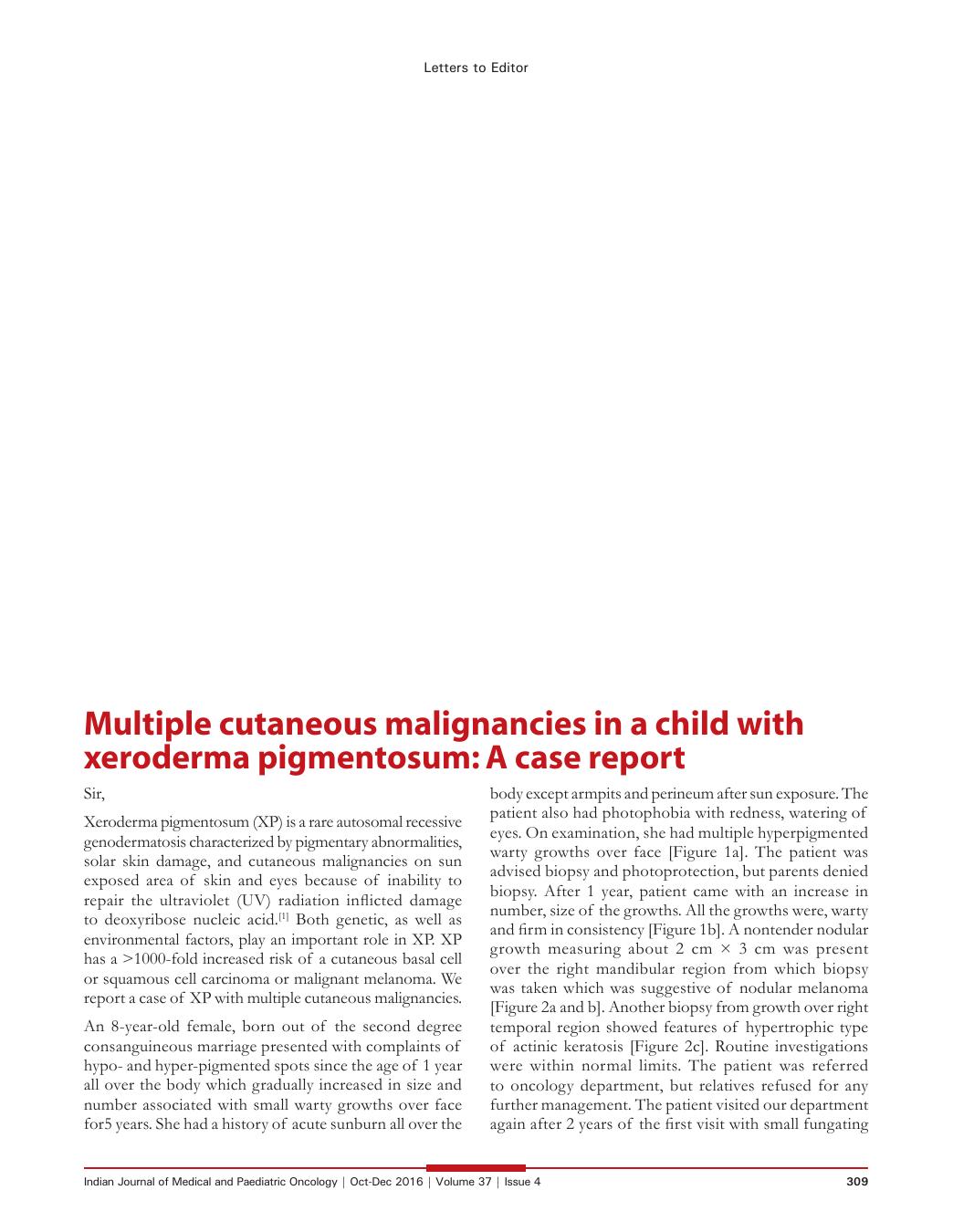 Xeroderma pigmentosum (XP) is a rare autosomal recessive genodermatosis characterized by pigmentary abnormalities, solar skin damage, and cutaneous malignancies on sun exposed area of skin and eyes because of inability to repair the ultraviolet (UV) radiation inflicted damage to deoxyribose nucleic acid.[1] Both genetic, as well as environmental factors, play an important role in XP. XP has a >1000-fold increased risk of a cutaneous basal cell or squamous cell carcinoma or malignant melanoma. We report a case of XP with multiple cutaneous malignancies.

An 8-year-old female, born out of the second degree consanguineous marriage presented with complaints of hypo- and hyper-pigmented spots since the age of 1 year all over the body which gradually increased in size and number associated with small warty growths over face for5 years. She had a history of acute sunburn all over the body except armpits and perineum after sun exposure. The patient also had photophobia with redness, watering of eyes. On examination, she had multiple hyperpigmented warty growths over face [Figure 1a]. The patient was advised biopsy and photoprotection, but parents denied biopsy. After 1 year, patient came with an increase in number, size of the growths. All the growths were, warty and firm in consistency [Figure 1b]. A nontender nodular growth measuring about 2 cm × 3 cm was present over the right mandibular region from which biopsy was taken which was suggestive of nodular melanoma [Figure ​[Figure2a2a and ​andb].b]. Another biopsy from growth over right temporal region showed features of hypertrophic type of actinic keratosis [Figure 2c]. Routine investigations were within normal limits. The patient was referred to oncology department, but relatives refused for any further management. The patient visited our department again after 2 years of the first visit with small fungating growths over face, scalp (4 cm × 4 cm) and large foul smelling fungating growth over nape of the neck extending over to upper back (10 cm × 8 cm) [Figure 3a]. Biopsy was taken from the growth over the nape of the neck which showed features of squamous cell carcinoma [Figure ​[Figure3b3b and ​andc].c]. There was a history of injury to the right eye, in between the two visits for which evisceration was done. The left eye was congested; right orbital socket was empty. Clinically, she was diagnosed as XP with multiple cutaneous malignancies. The patient was put on chemotherapy for squamous cell carcinoma; later, she was lost in follow-up.

| Fig. 1(a) Photograph of the patient of xeroderma pigmentosum at first visit. (b) Nodular lesion over right mandibular region and right temple with multiple freckles and verrucous lesions 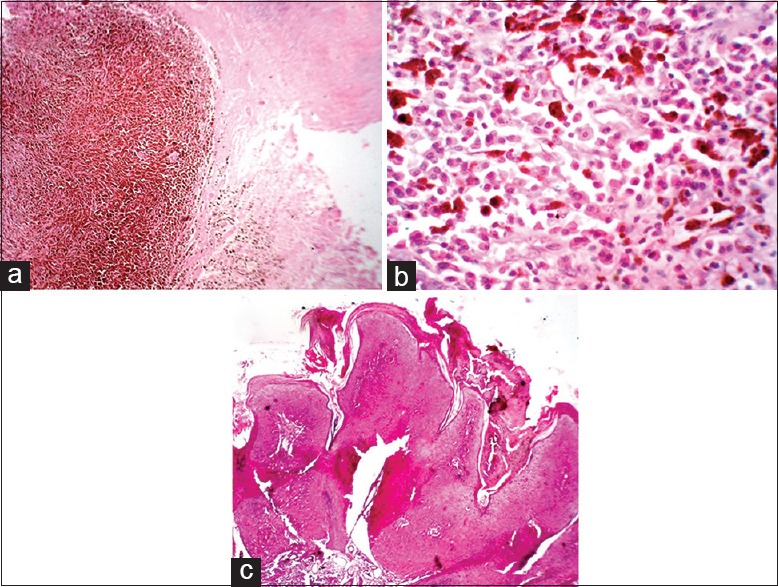 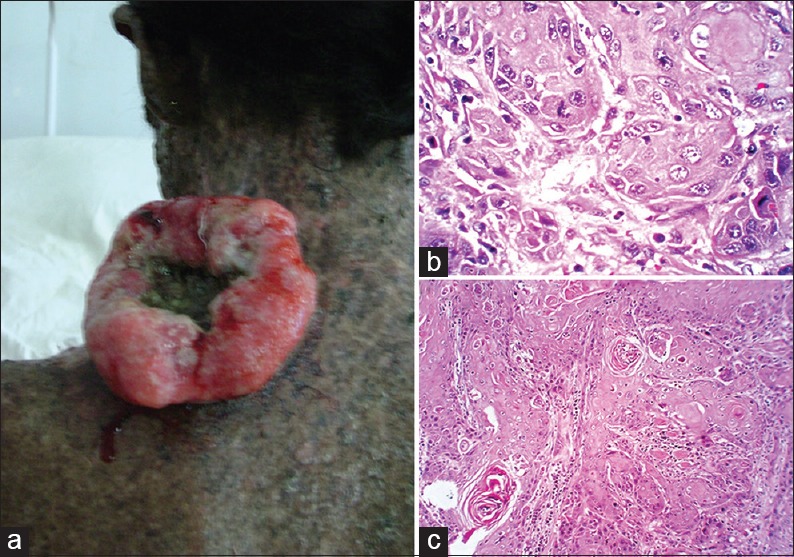 The incidence of XP in India is not known, but it is reported that its occurrence is more common in South India, especially in Karnataka.[2] Nucleotide excision repair defect is known to be the basic defect leading to defective repair of DNA damaged by UV radiation.[3]

Kramer et al. have reviewed the clinical features of 830 patients of XP.[4] These patients developed sensitivity to sunlight at the age between 1 and 2 years with the appearance of freckling, atrophy, telangiectasia as seen in our case. The median age for developing first malignant neoplasm of skin was 8 years. Forty-five to sixty percent of XP patients were observed to be developing malignant skin neoplasms in different studies.[5] Compared to normal controls Robbins has shown that the incidence of internal neoplasm in XP patients was 10–20 times higher.[6] Cutaneous neoplasms such as angiosarcoma and fibrosarcoma have also been reported.[7]

Various conditions like XP/Cockayne syndrome, cerebrooculofacial syndrome should be differentiated from XP.

Avoidance of sunlight, minimizing UV exposure by changes in the lifestyle like wearing protective clothing, UV absorbing glasses and long hair styles, early detection of skin lesions, and genetic counseling should be the primary management of XP. Surgical excision is the modality used for the treatment of cutaneous neoplasms. The incidence of new cancers in these patients is observed to have been reduced by oral 13-cisretinoic acid.

| Fig. 1(a) Photograph of the patient of xeroderma pigmentosum at first visit. (b) Nodular lesion over right mandibular region and right temple with multiple freckles and verrucous lesions