Multiple primary malignant neoplasms (MPMN) were first described by Billroth in 1889.[1] Since then, numerous studies and reports have appeared on the subject. The prevalence of MPMN was reported between 0.734% and 11.7% in a review of 1,104,269 cancer patients.[2] Modern diagnostic procedures contribute to the detection of synchronous occult tumors which may have formerly been overlooked. The present case is one such example where PET-CT performed for staging evaluation of a symptomatic oesophageal carcinoma led to the diagnosis of a synchronous asymptomatic colon carcinoma and also changed the neoadjuvant chemotherapy regimen used.

A 58-year female, known case of hypertension and type-2 diabetes mellitus, with no history of addictions presented with history of dysphagia to solid food and weight loss of 5 kg over last 2 months. There was no history of dysphagia to liquids, hoarseness of voice, throat pain, epigastric or retrosternal pain, chronic cough, breathlessness, or fever. There was no family history of cancer. Contrast Enhanced Computed Tomography (CECT) thorax revealed thickening of lower third oesophagus with growth extending into gastro-oesophageal (GE) junction and proximal stomach. Enlarged gastrohepatic lymph nodes were present with no significant mediastinal lymphadenopathy. Upper gastrointestinal endoscopy revealed an ulceroproliferative lesion from 33 cm to 38 cm with involvement of GE junction and extending to cardia. Biopsy of the lesion was obtained and histopathological examination was suggestive of a poorly differentiated adenocarcinoma [Figure 1]. As a part of staging workup, PET-CT was done which revealed metabolically active disease at lower third oesophagus and GE junction along with celiac lymphadenopathy. It also showed increased uptake in splenic flexure of colon [Figure 2]. Diagnostic colonoscopy revealed an ulceroproliferative lesion at splenic flexure with mild luminal compromise. Histopathology was suggestive of a moderately differentiated adenocarcinoma [Figure 3]. As the two tumors were at two separate geographical sites and were histopathologically different, being poorly differentiated adenocarcinoma for oesophagus and moderately differentiated adenocarcinoma for colon, diagnosis of carcinoma oesophagus with synchronous colon carcinoma was made. Patient was administered four cycles of FOLFIRI regimen (5-fluorouracil, leucovorin, and irinotecan) as neoadjuvant chemotherapy. Repeat PET-CT showed partial metabolic and morphological regression of circumferential thickening in both lower third oesophagus and splenic flexure of colon. Oesophageal wall thickness at the site of lesion decreased from 2.8 cm to 1.2 cm, while that at the splenic flexure of colon was reduced to no obvious mucosal thickening in the repeat scan. Upper gastrointestinal endoscopy showed residual nodularity and infiltration from 33 cm to 37 cm with involvement of GE junction and extending to cardia. Endoscopic ultrasonography revealed that the growth involved adventitia but was free from surrounding structures (T3) with no mediastinal or celiac lymph nodes (N0). The patient underwent transhiatal esophagogastrectomy and left hemicolectomy (R0 resection). Histopathological report reconfirmed the oesophageal lesion to be poorly differentiated adenocarcinoma. No lymphovascular or perineural invasion was seen and proximal and distal margins were free of tumor. Upper, middle, and lower paraoesophageal, hepatic, and splenic nodes were negative for metastases; however, a single lymph node along the lesser curvature showed metastasis. Left hemicolectomy specimen showed moderately differentiated adenocarcinoma with tumor infiltrating the muscularis propria but not through it. No lymphovascular or perineural invasion was seen and proximal and distal margins were free of tumor. Regional lymph nodes were negative for metastasis. Final diagnoses were oesophageal adenocarcinoma T3N1M0 and colon carcinoma T2N0M0. The patient received adjuvant chemotherapy with four cycles of FOLFIRI regimen. The patient was then kept on regular follow-up with repeat Carcino Embryonic Antigen CEA levels; upper and lower gastrointestinal endoscopy and scans planned at every 3 months for 6 months. After 3 months of follow-up, the patient remains asymptomatic and negative for disease relapse on investigations.

| Fig. 1 The oesophagus showed groups and cords of carcinoma cells (a and b), with focal gland formation (c) 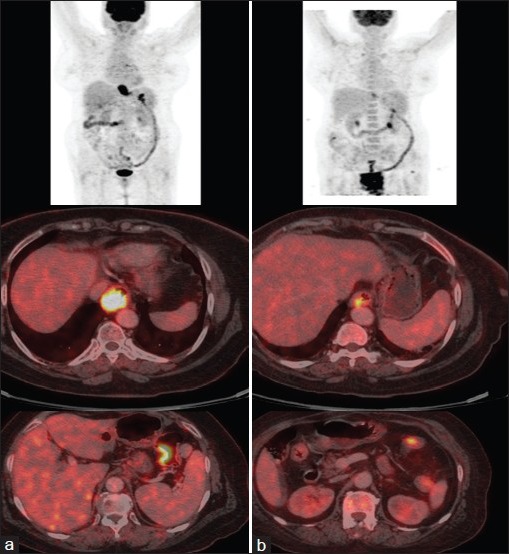 | Fig. 3 The tumor in the colon was a typical colonic type of adenocarcinoma (a and b)

MPMN can occur at any age. However, the patients with MPMN tend to be older than those with a single primary malignant neoplasm because the incidence of malignancy increases with age.[3,4] MPMN diagnosed at an earlier age are likely to be associated with family history or genetic predisposition of MPMN.[5] Synchronous carcinomas are those diagnosed at the same time or within a 6-month period after the diagnosis of the initial cancer. Metachronous carcinomas are different cancers that develop over 6 months after the diagnosis of the primary cancer, usually after the treatment of the primary lesion.[6] The reported incidence of synchronous malignancy in patients with MPMN varies between 19% and 34%.[3,7,8] Most of the malignancies with MPMNs involve the gastrointestinal, respiratory, and genitourinary systems.[9] With advances in diagnostic techniques and treatment modalities, the number of patients identified with MPMN has been increasing. The phenomenon of MPMN might reflect underlying genetic or immunological defects in the patient, treatment-related damage, or environmental exposure to carcinogens.[10] Carcinogenesis in different organs subjected to the same carcinogens and promoting factors has led to the concept of a multicentric pathogenic process termed “field cancerization.”[11] Molecular studies also support the alternative theory of a common clonal origin, especially in MPMN of head and neck regions.[11] Besides this, various host genetic factors could significantly modulate the risk of developing tobacco-related cancer including those related to various isoforms of glutathione S-transferases, cytochrome P450, N-acetyl transferase, and sulfotransferase enzymes.[12]

There have been reports that indicated an association between Barrett's metaplasia or adenocarcinoma of the oesophagus and colon carcinoma.[13] However, a subsequent case–control study from Finland showed that Barrett's oesophagus is not associated with an increased risk of colonic carcinoma, negating the need for routine colonoscopic surveillance in patients with Barrett's oesophagus.[14]

Patients with colorectal cancer have extraintestinal primary cancers 1.4 times more often than expected. Although reports about the relationship between colon cancer and synchronous oesophageal carcinoma have been published,[15] there were few reports in which colonic carcinoma was asymptomatic and was diagnosed incidentally as a second primary neoplasm. It has been proposed that environmental factors such as alcohol, smoking and diet, and genetic factors regulating increased expression of the cyclooxygenase-2 enzyme are central to the predisposition to both oesophageal and colon cancers.[16] Since this enzyme is inhibited by non-steroidal anti-inflammatory drugs such as aspirin and sulindac, these drugs hold promise as cancer chemopreventive agents in both oesophageal and colon cancers.

PET-CT imaging in oesophageal carcinoma leads to detection of unsuspected metastasis in 15% of patients and leads to alteration of intended treatment plan in 20% of patients. It is also of value in evaluating response to chemotherapy and radiotherapy.[17] This report underscores the importance of performing a PET-CT in a patient with oesophageal carcinoma as this not only led to the diagnosis of synchronous colonic carcinoma but also changed the treatment plan. Treatment of synchronous oesophageal and colonic cancers is directed at both the primaries simultaneously. Simultaneous resection of oesophageal and extra oesophageal neoplasms can be safely performed.[18] The standard chemotherapy regimens for oesophageal cancer are cisplatin and 5-fluorouracil (5-FU). However, oesophageal cancer associated with colon cancer has been successfully treated with combination chemotherapy of FOLFOX (5-fluorouracil, leucovorin, and oxaliplatin) and concurrent radiotherapy.[15] In our case, FOLFIRI regimen was used as neoadjuvant chemotherapy which showed good response at both the tumor sites as suggested by PET-CT imaging.

| Fig. 1 The oesophagus showed groups and cords of carcinoma cells (a and b), with focal gland formation (c)

| Fig. 3 The tumor in the colon was a typical colonic type of adenocarcinoma (a and b)