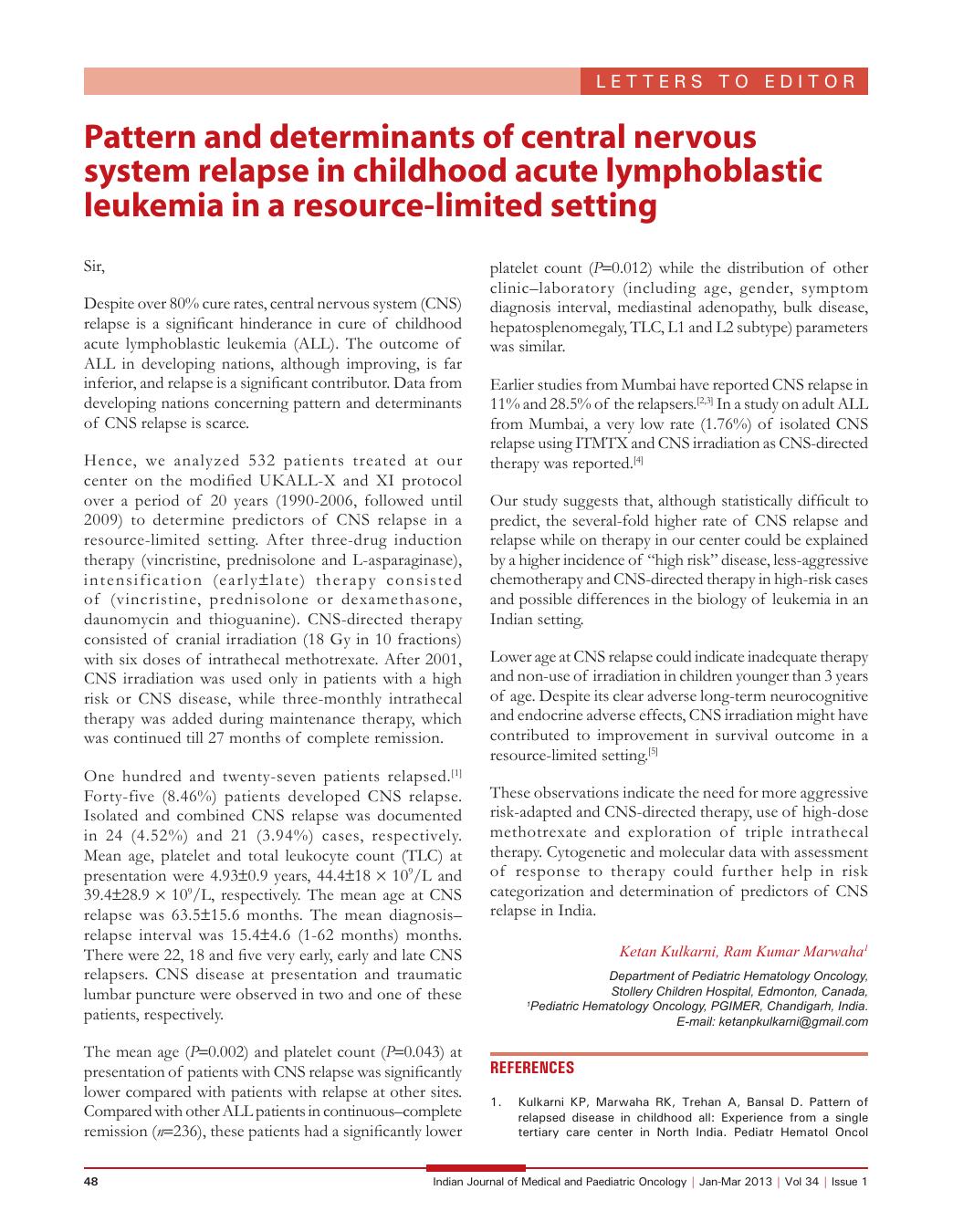 Hence, we analyzed 532 patients treated at our center on the modified UKALL-X and XI protocol over a period of 20 years (1990-2006, followed until 2009) to determine predictors of CNS relapse in a resource-limited setting. After three-drug induction therapy (vincristine, prednisolone and L-asparaginase), intensification (early±late) therapy consisted of (vincristine, prednisolone or dexamethasone, daunomycin and thioguanine). CNS-directed therapy consisted of cranial irradiation (18 Gy in 10 fractions) with six doses of intrathecal methotrexate. After 2001, CNS irradiation was used only in patients with a high risk or CNS disease, while three-monthly intrathecal therapy was added during maintenance therapy, which was continued till 27 months of complete remission.

The mean age (P=0.002) and platelet count (P=0.043) at presentation of patients with CNS relapse was significantly lower compared with patients with relapse at other sites. Compared with other ALL patients in continuous–complete remission (n=236), these patients had a significantly lower platelet count (P=0.012) while the distribution of other clinic–laboratory (including age, gender, symptom diagnosis interval, mediastinal adenopathy, bulk disease, hepatosplenomegaly, TLC, L1 and L2 subtype) parameters was similar.

Earlier studies from Mumbai have reported CNS relapse in 11% and 28.5% of the relapsers.[2,3] In a study on adult ALL from Mumbai, a very low rate (1.76%) of isolated CNS relapse using ITMTX and CNS irradiation as CNS-directed therapy was reported.[4]

Our study suggests that, although statistically difficult to predict, the several-fold higher rate of CNS relapse and relapse while on therapy in our center could be explained by a higher incidence of “high risk” disease, less-aggressive chemotherapy and CNS-directed therapy in high-risk cases and possible differences in the biology of leukemia in an Indian setting.

Lower age at CNS relapse could indicate inadequate therapy and non-use of irradiation in children younger than 3 years of age. Despite its clear adverse long-term neurocognitive and endocrine adverse effects, CNS irradiation might have contributed to improvement in survival outcome in a resource-limited setting.[5]

These observations indicate the need for more aggressive risk-adapted and CNS-directed therapy, use of high-dose methotrexate and exploration of triple intrathecal therapy. Cytogenetic and molecular data with assessment of response to therapy could further help in risk categorization and determination of predictors of CNS relapse in India.