Lung cancer is one of the common differential diagnosis for, weight loss, lung mass, pleural effusion with lymphadenopathy in a male smoker in our country. The diagnosis requires high index of suspicion as it can be easily confused with tuberculosis and chronic bronchitis. The standard management of stage IV lung cancer with good performance status is palliative chemotherapy. Here we would like to discuss surgical options for oligometastic stage IV lung cancer with pleural effusion.

The common differential diagnoses for weight loss and lung mass with lymphadenopathy in a male smoker in our country are chronic obstructive lung disease, chronic bronchitis, tuberculosis, pneumonia, and lung cancer. Clinical history and thorough examination should be made with careful palpation of the neck for lymphadenopathy and chest auscultation. A chest radiograph is the basis of imaging and is complemented by a contrast-enhanced CT scan of the chest, which should include the liver and the adrenal glands. Tissue diagnosis is mandatory if the clinicoradiological suspicion of malignancy is high and a biopsy should be performed either by bronchoscopy or with CT guidance. If confirmed to be malignant, further staging workup would be required if the chest CT scan shows non-metastatic disease. A metastatic workup would include a positron emission tomography (PET)-CT scan and a magnetic resonance imaging (MRI) scan of the brain.

Our patient presented to us with a CT scan showing a left upper lobe mass with ipsilateral mediastinal lymphadenopathy and a small pleural effusion. His vitals were normal, physical examination was unremarkable, and ECOG performance status was 1. Fiber optic bronchoscopy showed no endobronchial growth. Diagnostic thoracentesis was performed. Pleural fluid cytology was positive for metastatic squamous cell carcinoma.

Role of cytology in lung cancer

Conventional cytologies such as sputum examination, bronchial lavage, bronchial brushings, fine-needle aspiration biopsy have played an important role in the diagnosis of primary and metastatic lung cancers. Immunohistochemical stains can be applied on cytological material. The immunohistochemical markers such as TTF-1, CK7, CK20, 4A4, 34 E12, and p63 help to classify further subtypes in Non-small cell lung cancer (NSCLC). In addition, epidermal growth factor receptor (EGFR) gene mutation studies can also be done on the blocks prepared from cytological material, which helps in choosing appropriate targeted therapy. Thus, cytology plays an important role not only to subclassify tumors but also to individualize treatment strategy with the advantage of easy availability and minimum invasiveness.[1]

Thus, the patient was diagnosed with squamous cell carcinoma of the lung, T3N2M1a, stage IV.

The standard management of stage IV lung cancer is palliative chemotherapy with platinum-based combination chemotherapy. However, there are some reports of patients with lung cancer with only a malignant pleural effusion and no other metastatic sites that have long-term cures with chemotherapy and surgery.[2,3] In view of the excellent performance status of the patient and the PET-CT showing no other sites of metastases, it was decided that therapy with potentially curative intent could be attempted even though this would be a deviation from established guidelines. A staging workup was performed.

After establishing a tissue diagnosis, a complete staging workup is done to identify the presence of metastasis and for feasibility of surgical resection.

After detailed history and physical examination, laboratory investigations such as complete blood count, liver function tests (transaminases), serum electrolytes, serum calcium, and serum alkaline phosphatase are done. More than 80% of patients with an abnormality on evaluation have metastatic disease. Patients presenting with anorexia, weight loss, and fatigue have an especially poor prognosis which depicts advanced stage and aggressive tumor biology.[4]

Chest and abdomen CT and PET scans are routinely performed in patients with suspected metastatic lung cancer. Chest and upper abdomen CT scans help to identify hilar and mediastinal adenopathy and liver or adrenal metastases. CT chest has accuracy of 88% (80% sensitive and 100% specificity) in identifying mediastinal involvement. Integrated CT/PET has better sensitivity and specificity than CT or PET alone.[5]

Bronchoscopy with or without transbronchial needle aspiration, endobronchial ultrasound-guided transbronchial needle aspiration, video-assisted thoracoscopy, or mediastinoscopy has played an important role in evaluation of patients with suspected mediastinal involvement. Video-assisted thoracoscopy or mediastinoscopy has the advantage of directly visualizing the lesion and accurate sampling. Additional investigations are performed depending on clinical symptoms. Bone scanning and brain magnetic resonance imaging may be performed, depending on symptoms.[5]

PET/CT has good sensitivity and specificity in identifying distant metastases.[6] Thus, the PET/CT is very important in the decision-making process for a patient with NSCLC, especially so in a patient with oligometastases. Any suspicious lesion identified by PET/CT should be confirmed by histopathological evaluation. Various studies have reported that whole body PET detects occult metastases in 6-17% of NSCLC patients in whom conventional staging methods failed to identify the metastases.[7] PET/CT has positive predictive value of 54% in identifying additional lesions on top of the primary lung cancer.[8]

A PET-CT scan and an MRI scan of the brain showed absence of metastatic disease. The patient was counseled in detail regarding the standard recommended treatment of palliative chemotherapy alone, or an off-guideline option of chemotherapy followed by surgery if the response was good. The patient chose the latter option. The patient was given three cycles of chemotherapy with gemcitabine 1000 mg/m2 day 1 and day 8 along with carboplatin AUC 5 (area under the curve, calculated by Calvert formula) on day 1 for every 21 days. He tolerated the chemotherapy well without major side effects. There was significant symptomatic benefit in the pain after the first cycle of chemotherapy.

Following three cycles of chemotherapy, PET-CT revealed a 1.9 × 1.6 × 1.2 cm left lingular lobe mass (SUV 3.5) with no abnormal activity in the mediastinal nodes and no distant metastases. We performed a left upper lobectomy with systematic mediastinal lymphadenectomy following which the patient had an uneventful post-operative recovery. Intra-operatively, a 2 × 2 cm left upper lobe lung mass was seen adherent to the pericardium with enlarged aortopulmonary AP window and left hilar nodes. There were no pleural nodules or effusion. The final histopathology showed no residual tumor with all regional nodes negative for metastasis (ypT0N0) [Figure 1]. 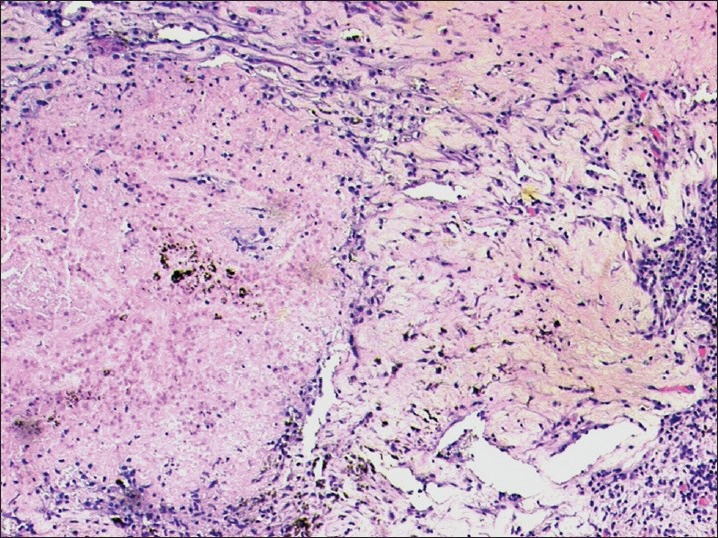 The patient is now alive and free of disease after a 24-month follow-up.

Assessment of pathological response to chemotherapy has played an important role in head and neck carcinomas, esophageal carcinoma, osteogenic sarcoma, and small cell lung carcinoma. Pathological complete response is defined as fibrosis or fibro inflammation without microscopic evidence of carcinoma and histologically negative nodes. Non-pCR is defined as any evidence of viable carcinoma, either at the primary site or at the resected regional LN. Those patients who achieve complete pathological response have long-term survival advantage. Junker et al.[9] found that in NSCLC patients, not only complete responders but also extensive responders with  < 10% residual tumor also had good long-term survival.

The common histological features of tumor regression are coagulative necrosis, fibrosis, foam cell/giant cell reaction, as well as mixed inflammatory infiltrate. The amounts of fibrosis correlate well with extent of tumor regression, which in turn is a surrogate marker of tumor response. Squamous carcinoma was associated with a higher probability of treatment response than adenocarcinoma.[9]

To conclude, pathological response can be of two types: Responder and non-responder groups. The common histological changes seen are fibrosis, necrosis, and foam cell/giant cell reaction; in some cases, increase in residual tumor nuclear grade is seen. The radiological assessments may not correlate well with the pathological response.[10]

NSCLC is the leading cause of cancer-related deaths worldwide. Brain, bone, liver, and adrenal gland are the most common extrapulmonary sites of distant metastases.[11] 20-50% of NSCLC will present with metastatic disease. Stage IV NSCLC cancer has an overall median survival time of 7-11 months.[12]

Most of the data on curative management of oligometastatic NSCLC include patient with adrenal metastasis, brain metastasis, and few selected reports of patients with lung cancer with only a malignant pleural effusion and no other metastatic sites who have long-term cures with chemotherapy and surgery.[2,3]

Brain metastases have dismal prognosis without treatment, with median survival of 1-2 months.[16] Historically, whole brain radiation therapy (WBRT) was the standard of care in the management of brain metastases. 75% of patients had symptomatic neurological improvement with WBRT alone. However, this benefit is short-lived, with a median survival of only 3-6 months. Chronic neurological morbidities were seen in significant patients on follow-up.[17] With advances in surgical techniques, resection of solitary brain metastasis can be done with low surgical morbidity and mortality rates (0-3%).[4]

Stereotactic radiosurgery is an alternative approach to surgical resection in which high dose of focused radiation in a single fraction to a specific intra-cranial target is delivered, thus minimizing the unwanted radiation exposure to normal surrounding parenchyma. Recent data suggest that the combined treatment regime is beneficial for patients with a single brain metastasis.[18,19]

The adrenal gland metastatic involvement ranges from 18% to 42% in an autopsy series.[20,21] Benign adenomas (2-9%) are common in general population, so the presence of an adrenal mass on imaging itself does not confirm metastasis.[21,22] The prognosis and management depend on whether the mass is benign or malignant. PET-CT and an MRI do not definitively rule out malignancy,[22,23] so histopathological confirmation is must before lung resection. The potential benefit of diagnostic laparoscopy over fine-needle biopsy alone is that it allows the exploration of the entire peritoneal cavity with a histological examination of suspected nodules.[23,24] Moreover, laparoscopic adrenalectomy done for diagnostic purposes is itself a therapeutic modality for metastases.[24]

In NSCLC, most common sites for oligometastatic disease include the thorax, adrenals, and brain; metastases other than these sites are rare. There are two retrospective case series addressing this issue.[24,13] Long-term survival was high, with a 5-year overall survival rate of 55.6% and a 10-year overall survival rate of 86% in reported series[13,25] Based on the above two retrospective studies, three factors are considered important in selecting patients for resection: (a) the primary tumor should be completely resected; (b) metastases must be metachronous onset; and (c) there should be no other distant metastasis.[13]

Our patient was treated as stage IV NSCLC with curative intent as a deviation from established guidelines. In the absence of other distant metastases, he was given three cycles of neoadjuvant chemotherapy and underwent curative intent surgery. Complete pathological remission was achieved which has been rarely reported in literature.

The diagnosis of malignant pleural effusion with non-small cell carcinoma does not necessarily imply that patient has incurable disease. In selected subsets of patients, a cure may be possible after multimodality therapy. To properly select patients for an aggressive local treatment regime, accurate clinical staging is of prime importance. The use of FDG-PET should be considered for restaging if oligometastatic disease is suspected based on a patient's CT scan. Our case report illustrates the potential role of curative intent surgery in stage IV lung cancer, with malignant pleural effusion but without distant metastases. The usefulness of PET-CT imaging in the staging and evaluation of response are also highlighted by the current study.