Abiraterone acetate, an inhibitor of adrenal androgen synthesis in 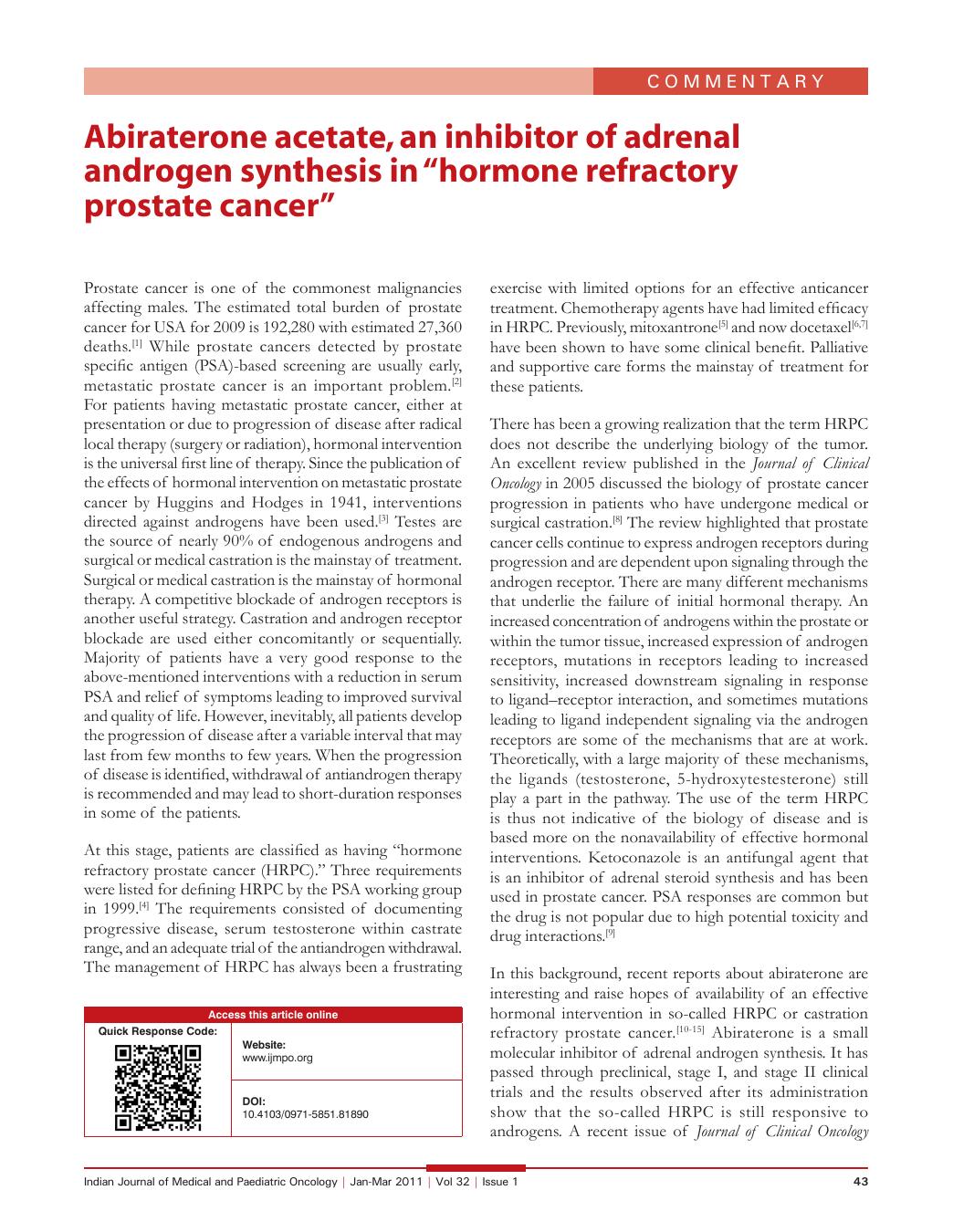 Prostate cancer is one of the commonest malignancies affecting males. The estimated total burden of prostate cancer for USA for 2009 is 192,280 with estimated 27,360 deaths.[1] While prostate cancers detected by prostate specific antigen (PSA)-based screening are usually early, metastatic prostate cancer is an important problem.[2] For patients having metastatic prostate cancer, either at presentation or due to progression of disease after radical local therapy (surgery or radiation), hormonal intervention is the universal first line of therapy. Since the publication of the effects of hormonal intervention on metastatic prostate cancer by Huggins and Hodges in 1941, interventions directed against androgens have been used.[3] Testes are the source of nearly 90% of endogenous androgens and surgical or medical castration is the mainstay of treatment. Surgical or medical castration is the mainstay of hormonal therapy. A competitive blockade of androgen receptors is another useful strategy. Castration and androgen receptor blockade are used either concomitantly or sequentially. Majority of patients have a very good response to the above-mentioned interventions with a reduction in serum PSA and relief of symptoms leading to improved survival and quality of life. However, inevitably, all patients develop the progression of disease after a variable interval that may last from few months to few years. When the progression of disease is identified, withdrawal of antiandrogen therapy is recommended and may lead to short-duration responses in some of the patients.

At this stage, patients are classified as having “hormone refractory prostate cancer (HRPC).” Three requirements were listed for defining HRPC by the PSA working group in 1999.[4] The requirements consisted of documenting progressive disease, serum testosterone within castrate range, and an adequate trial of the antiandrogen withdrawal. The management of HRPC has always been a frustrating exercise with limited options for an effective anticancer treatment. Chemotherapy agents have had limited efficacy in HRPC. Previously, mitoxantrone[5] and now docetaxel[6,7] have been shown to have some clinical benefit. Palliative and supportive care forms the mainstay of treatment for these patients.

There has been a growing realization that the term HRPC does not describe the underlying biology of the tumor. An excellent review published in the Journal of Clinical Oncology in 2005 discussed the biology of prostate cancer progression in patients who have undergone medical or surgical castration.[8] The review highlighted that prostate cancer cells continue to express androgen receptors during progression and are dependent upon signaling through the androgen receptor. There are many different mechanisms that underlie the failure of initial hormonal therapy. An increased concentration of androgens within the prostate or within the tumor tissue, increased expression of androgen receptors, mutations in receptors leading to increased sensitivity, increased downstream signaling in response to ligand–receptor interaction, and sometimes mutations leading to ligand independent signaling via the androgen receptors are some of the mechanisms that are at work. Theoretically, with a large majority of these mechanisms, the ligands (testosterone, 5-hydroxytestesterone) still play a part in the pathway. The use of the term HRPC is thus not indicative of the biology of disease and is based more on the nonavailability of effective hormonal interventions. Ketoconazole is an antifungal agent that is an inhibitor of adrenal steroid synthesis and has been used in prostate cancer. PSA responses are common but the drug is not popular due to high potential toxicity and drug interactions.[9]

In this background, recent reports about abiraterone are interesting and raise hopes of availability of an effective hormonal intervention in so-called HRPC or castration refractory prostate cancer.[10–15] Abiraterone is a small molecular inhibitor of adrenal androgen synthesis. It has passed through preclinical, stage I, and stage II clinical trials and the results observed after its administration show that the so-called HRPC is still responsive to androgens. A recent issue of Journal of Clinical Oncology (March 20, 2010) has a number of reports documenting early clinical experience with this drug in patients traditionally labeled HRPC.[13–15]

Abiraterone inhibits adrenal androgen synthesis by selective inhibition of the enzyme CYP 17. CYP 17 is associated with two separate actions in the steroid biosynthesis: 17 α-hydroxylase and C17,20-lyase. First dose finding studies in humans were reported in British Journal of Cancer in 2004.[10] The studies were carried out with orally administered abiraterone acetate that acts as a prodrug and gets deacetylated to abiraterone. This study reported that abiraterone achieved additional suppression of testosterone in castrate men, and might be useful as a second-line hormonal intervention in prostate cancer.

A phase I study of abiraterone acetate, reported in 2008, identified a daily oral dose of 1000 mg as the dose level to be used for further clinical studies.[11] An important observation of this study was that patients may develop hypertension, edema, and hypokalemia. These side effects are related to excess production of mineralocorticoids and were easily managed by the administration of a mineralocorticoid receptor antagonist (eplerenone). Fifty-seven percent of patients in this phase I study had more than 50% decline in PSA levels. Data from an updated phase I/II study were reported by the same team in 2009.[12] In a study involving 42 HRPC patients who had no previous chemotherapy, 67% of patients had greater than 50% reduction in PSA levels. Partial responses using RECIST criteria were observed in 37.5% of 24 patients with measurable disease.

Of the three studies published in the March 20, 2010, issue of Journal of Clinical Oncology, one is a phase I study that evaluated various doses of abiraterone acetate in chemotherapy naïve HRPC patients and found a dose level of 1000 mg as tolerable with manageable toxicity.[13] Hypertension and hypokalemia were again the common side effects. A decline in serum PSA was seen in patients with or without prior ketoconazole therapy.

Taking into consideration all the publications, it is apparent that abiraterone acetate administered orally is an effective inhibitor of adrenal androgen synthesis. A daily dose of 1000 mg per day suppresses serum testosterone levels in castrate patients. An excess production of mineralocorticoids is responsible for side effects of hypertension and hypokalemia. The low-dose administration of prednisone (5 mg twice a day) simultaneously with abiraterone acetate or use of antagonists of mineralocorticoid receptors is effective in preventing or managing these side effects. Further, abiraterone acetate administration leads to 50% or higher reduction in serum PSA levels in nearly half of the patients including patients with previous docetaxel treatment. Prior ketoconazole therapy is associated with a reduction in the response rates and duration.

The drug is now being tested in two prospective randomized phase III trials in metastatic HRPC.[16,17] The drug has raised hopes of availability of a moderately effective oral agent that can be useful in a large patient population of the so-called hormone refractor patient population. It also raises hopes for the discovery of other agents that can target the androgen synthesis or signaling pathways and provide clinical benefits in advanced prostate cancer. It may also become necessary to change the definition of “hormone refractory prostate cancer.”