A 43-year-old non-smoker female presented with symptoms of blurring of vision in both eyes since the last 15 days. Baseline visual acuity was finger counting at 1 m and 6/48 in the right and left eyes, respectively. On fundoscopy, the appearance was of a pale plateau lesion overlying the macula in the right eye and a temporal elevation at the equator in the left eye [Figure ​[Figure1a1a and ​andb].b]. Ultrasonographic evaluation revealed irregular nodular mass lesions in the posterior segment of both eyes on A scan. The right- and left-sided lesions were 2.2 mm×2.1 mm×4.5 mm and 3.6 mm×2.1 mm×2.9 mm, respectively. There was irregular echo texture and choroidal infiltration on B scan, suggestive of choroidal metastasis. Contrast-enhanced computed tomography (CT) of the brain did not show any intracranial metastasis except bilateral nodular retinal thickening. 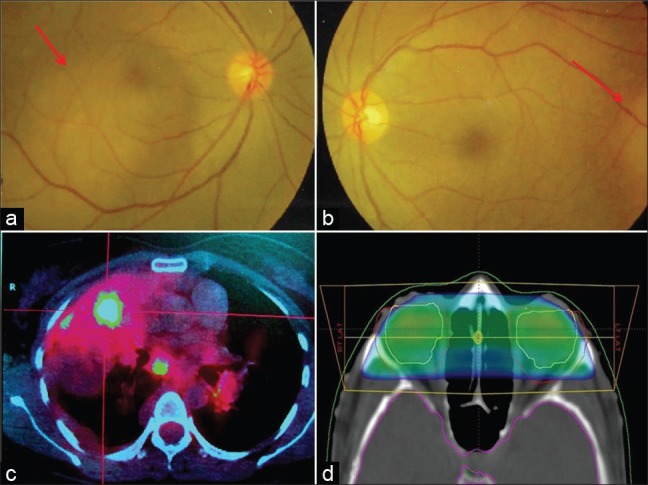 | Fig. 1 (a) Bilateral choroidal metastasis seen as a pale patch like appearance on fundoscopy overlying the macula on the right and (b) temporal to the equator on the left. (c) Positron emission tomography-computed tomography showing high-grade neoplasm in the right upper lobe lung with mediastenal lymphadenopathy. (d) Ninety-five percent isodose covering the bilateral orbits delivered by bilateral 15-degree wedged portals

The patient was informed about the prognosis, expected survival and palliative intent of treatment and was counselled regarding the various therapeutic options available, including chemotherapy, radiation therapy, targeted therapy and best supportive care. Worsening visual symptoms, which limited functional independence, were decided to be treated first. She received external beam radiotherapy with 15-degree wedged bilateral portals to bilateral orbits to a dose of 3000 cGy in 10 fractions delivered as 300 cGy per fraction, one fraction per day [Figure 1d]. This was followed by the first cycle of carboplatin (Area under curve=6) and paclitaxel (175 mg/m2). Visual acuity measured 7 days after completion of radiotherapy was 6/36 in the right eye and 6/18 in the left eye hence gaining significant useful vision in both eyes. However, the patient succumbed to systemic metastasis 2 weeks after radiotherapy.

Lung cancer is among the most common solid malignancies. More than 50% of patients present with locally advanced or metastatic disease with dismal prognosis and limited survival.[1] With the advent of newer chemotherapy schedules and conformal radiotherapy and early detection of cases due to heightened awareness, the survival has improved, although modestly. As a result, an increasing number of patients are now presenting with adrenal, bone, contralateral lung and liver metastasis with stable or controlled primary.[2] The incidence of choroidal metastasis in metastatic carcinoma lung is rare but not uncommon.[3] Only limited cases have so far been reported where choroidal metastasis is the first clinical sign of lung cancer, with the majority of them presenting with unilateral choroidal metastasis.[4] Our patient had unusual presentation with symptoms of bilateral visual blurring as the first systemic manifestation of disseminated lung cancer and regain in useful vision after palliative radiotherapy to bilateral choroid.

In uvea, choroid (88%) is the most common site of metastasis due to its rich vascular supply followed by iris (9%) and ciliary body (5%).[5] Common presentation symptoms are blurring of vision, diminution of vision, redness, pain and black spots with flat or plateau amelanotic lesion close to macula and 2–4 disc diameter as the initial sign on fundoscopy.[4] Thorough ophthalmologic evaluation done by an expert of ipsilateral as well as contralateral eye with meticulous record of baseline visual acuity and field mapping along with ultrasonography, flourescin angiography, magnetic resonance imaging (MRI) orbit and fine needle aspiration cytology (FNAC) for confirmation in assessable sites are recommended. MRI brain with gadolinium enhancement should be performed as significant patients also have synchronous brain metastasis (22%).[5] Common differential diagnosis includes primary choroidal melanomas, hemangioma, granuloma, hemorrhage and leukemic deposits.[5,6] Histopathological confirmation from choroidal lesion by FNAC under sonographic guidance must be obtained for suspicious lesions in the absence of primary or metastatic tumor and to rule out benign pathology.

Palliative radiotherapy when given to younger patients with good performance status, no brain metastasis, expected survival more than 3 months, better pre-treatment visual acuity and tumor diameter <15 mm is likely to restore useful vision and improve functional independence.[8] Many of these features were present in our case. The role of chemotherapy is still to be defined conclusively in choroidal metastasis; however, use of palliative chemotherapy has the potential to decrease the incidence of subsequent choroidal metastasis in disseminated breast carcinoma.[9] We chose 3 Gy/fraction (30 Gy) instead of 4 Gy/fraction (20 Gy) to reduce the risk of neuropathy.

Late toxicity data of radiotherapy for choroidal metastasis are scarce, with the incidence reported to be about 5%.[7] It includes retinopathy, neovascularisation, keratopathy, cataract, glaucoma and optic neuropathy. Dose more than 40 Gy has been associated with higher rates of retinopathy, which is a dose-limiting toxicity. Report of incidence of late toxicity with disseminated lung metastasis is anecdotal as most patients succumb to systemic disease within few weeks to months of diagnosis, unlike in the breast, where the median survival can be more than 10 months.[7]

Patients with disseminated metastasis with new-onset blurring of vision should be evaluated for choroidal metastasis and offered palliative radiotherapy. For a new patient with visual blurring as the first symptom, strong clinical suspension with characteristic fundoscopic finding should prompt for a thorough systematic work-up for search of primary and palliative radiotherapy for early restoration of useful vision and functional independence.

| Fig. 1 (a) Bilateral choroidal metastasis seen as a pale patch like appearance on fundoscopy overlying the macula on the right and (b) temporal to the equator on the left. (c) Positron emission tomography-computed tomography showing high-grade neoplasm in the right upper lobe lung with mediastenal lymphadenopathy. (d) Ninety-five percent isodose covering the bilateral orbits delivered by bilateral 15-degree wedged portals