Clinical trials in oncology: Has India come of age? 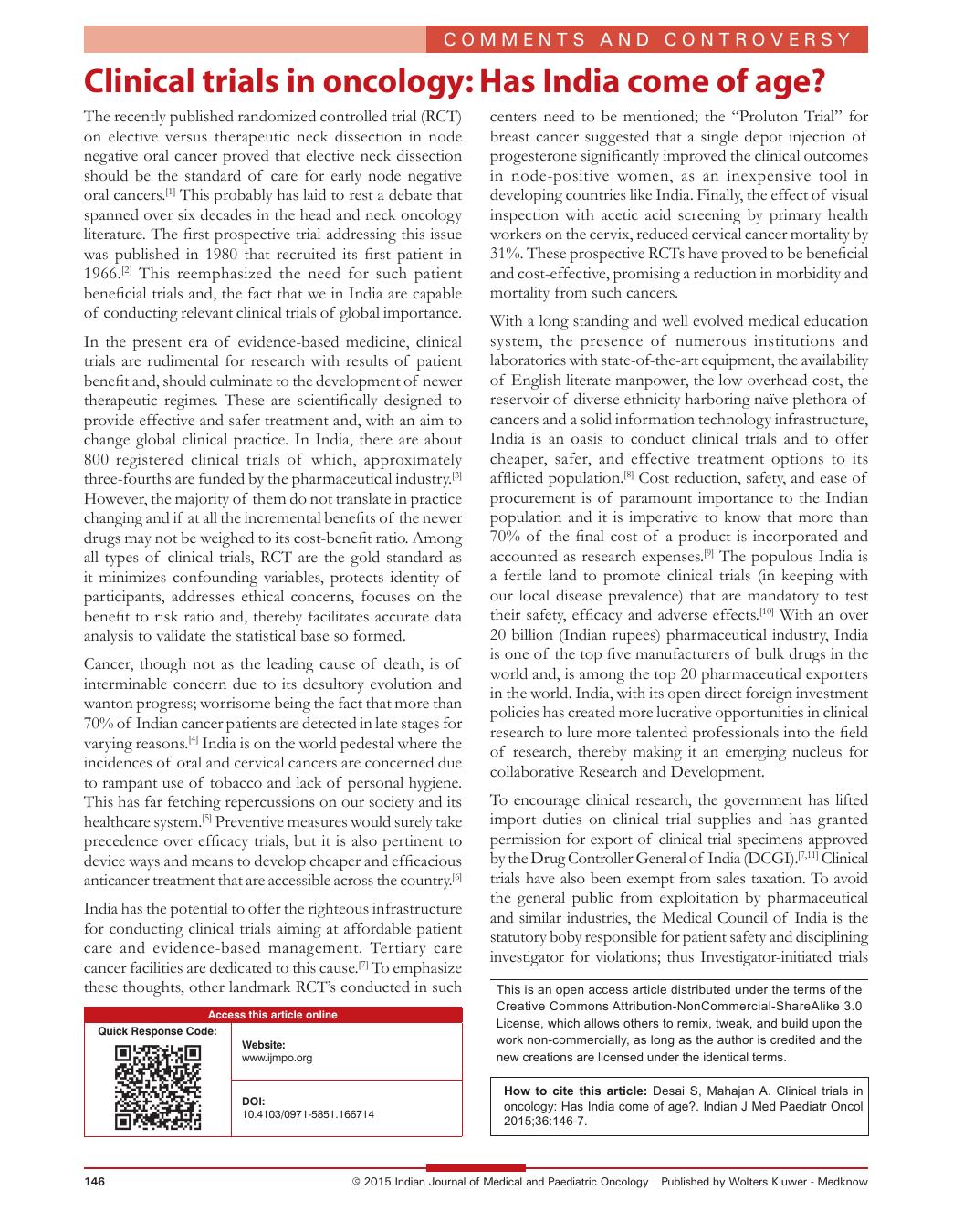 The recently published randomized controlled trial (RCT) on elective versus therapeutic neck dissection in node negative oral cancer proved that elective neck dissection should be the standard of care for early node negative oral cancers.[1] This probably has laid to rest a debate that spanned over six decades in the head and neck oncology literature. The first prospective trial addressing this issue was published in 1980 that recruited its first patient in 1966.[2] This reemphasized the need for such patient beneficial trials and, the fact that we in India are capable of conducting relevant clinical trials of global importance.

In the present era of evidence-based medicine, clinical trials are rudimental for research with results of patient benefit and, should culminate to the development of newer therapeutic regimes. These are scientifically designed to provide effective and safer treatment and, with an aim to change global clinical practice. In India, there are about 800 registered clinical trials of which, approximately three-fourths are funded by the pharmaceutical industry.[3] However, the majority of them do not translate in practice changing and if at all the incremental benefits of the newer drugs may not be weighed to its cost-benefit ratio. Among all types of clinical trials, RCT are the gold standard as it minimizes confounding variables, protects identity of participants, addresses ethical concerns, focuses on the benefit to risk ratio and, thereby facilitates accurate data analysis to validate the statistical base so formed.

Cancer, though not as the leading cause of death, is of interminable concern due to its desultory evolution and wanton progress; worrisome being the fact that more than 70% of Indian cancer patients are detected in late stages for varying reasons.[4] India is on the world pedestal where the incidences of oral and cervical cancers are concerned due to rampant use of tobacco and lack of personal hygiene. This has far fetching repercussions on our society and its healthcare system.[5] Preventive measures would surely take precedence over efficacy trials, but it is also pertinent to device ways and means to develop cheaper and efficacious anticancer treatment that are accessible across the country.[6]

India has the potential to offer the righteous infrastructure for conducting clinical trials aiming at affordable patient care and evidence-based management. Tertiary care cancer facilities are dedicated to this cause.[7] To emphasize these thoughts, other landmark RCT's conducted in such centers need to be mentioned; the “Proluton Trial” for breast cancer suggested that a single depot injection of progesterone significantly improved the clinical outcomes in node-positive women, as an inexpensive tool in developing countries like India. Finally, the effect of visual inspection with acetic acid screening by primary health workers on the cervix, reduced cervical cancer mortality by 31%. These prospective RCTs have proved to be beneficial and cost-effective, promising a reduction in morbidity and mortality from such cancers.

With a long standing and well evolved medical education system, the presence of numerous institutions and laboratories with state-of-the-art equipment, the availability of English literate manpower, the low overhead cost, the reservoir of diverse ethnicity harboring naïve plethora of cancers and a solid information technology infrastructure, India is an oasis to conduct clinical trials and to offer cheaper, safer, and effective treatment options to its afflicted population.[8] Cost reduction, safety, and ease of procurement is of paramount importance to the Indian population and it is imperative to know that more than 70% of the final cost of a product is incorporated and accounted as research expenses.[9] The populous India is a fertile land to promote clinical trials (in keeping with our local disease prevalence) that are mandatory to test their safety, efficacy and adverse effects.[10] With an over 20 billion (Indian rupees) pharmaceutical industry, India is one of the top five manufacturers of bulk drugs in the world and, is among the top 20 pharmaceutical exporters in the world. India, with its open direct foreign investment policies has created more lucrative opportunities in clinical research to lure more talented professionals into the field of research, thereby making it an emerging nucleus for collaborative Research and Development.

To encourage clinical research, the government has lifted import duties on clinical trial supplies and has granted permission for export of clinical trial specimens approved by the Drug Controller General of India (DCGI).[7,11] Clinical trials have also been exempt from sales taxation. To avoid the general public from exploitation by pharmaceutical and similar industries, the Medical Council of India is the statutory boby responsible for patient safety and disciplining investigator for violations; thus Investigator-initiated trials should be promoted in high-volume academic centers. One such initiative is the recent creation of National Cancer Grid, India formed in August 2012 comprising of more than 60 Regional Cancer Centers across the country to promote and safeguard the uniformity of “Patient care,” “Education and Training,” and “Collaborative research.”[10,12] Other agencies such as Indian Council of Medical Research (ICMR), Department of Biotechnology and the Wellcome Trust and Department of Science and Technology have emerged as the major funding agency to support national and international trials.[10,13]

By 2009, India had become one of the most preferred countries to conduct clinical trials and this resulted in several incidents of unethical practice and did not protect the safety of our vulnerable population.[14] Though the ICMR has been in place since 1949, it was not till 2005 that strict measures were set in accordance to the principles of the Declaration of Helsinki 1964 (7th revision — 2013), the Indian Good Practice guidelines and the International Conference on Harmonization, for conducting clinical trials to protect the safety of the participants; now its implementation is being looked after by the DCGI.[7,15] For added authenticity, the Clinical Trials Registry India, a part of Primary Register of the International Clinical Trials Registry Platform makes it mandatory for all investigators to register prospectively their trials under the national registry and provide complete disclosure of the trial data set items.[16] To encourage those interested in medical trials, organizations like Institute of Clinical Research India, the Academia of Clinical Excellence and the Bioinformatics Institute of India are offering education and courses related to clinical research, data management and patient safety.[7]

To conclude, we have unique cancers such as tobacco related head-neck cancers which are in higher number than in the west and provide an ideal opportunity for Indian researchers to fill the void in the existing literature. Extrapolating western data to the Indian population may not be applicable at all times. We should look forward to a uniform and widespread dissemination of high-quality cancer care through the collaborative initiative. We need to have evidence-based practice grounded on meaningful clinical research relevant to our population and directed towards our problems. And to have more effective, affordable, and easily accessible medical treatment for cancer, more RCTs are necessary in our country.