The diagnosis of breast carcinoma can be reliably made by fine needle aspiration cytology (FNAC). Grading usually done in histological samples for the selection of therapy but not in cytology. Various cytological grading systems have been proposed; however, none of them is presently considered the gold standard to predict the prognosis.

This study was undertaken to evaluate various 3-tier cytological grading systems and to determine the best possible system corresponds to the histological grading proposed by Elston and Ellis based on the method by Nottingham modification of Scarff-Bloom-Richardson (SBR) method.

In women, breast carcinoma is one of the most common cancers in the world and is second most common malignancy in India.[1,2] The histological grading proposed by Elston and Ellis using Nottingham modification of Scarff-Bloom-Richardson (SBR) method for breast carcinoma is widely accepted tumor grading system, and it is a useful, sensitive guide for selecting neoadjuvant therapy and has been found to have a good prognostic correlation.[3] However, cytological grading of breast carcinoma is sparingly used and reported. Selection of neoadjuvant therapy and assessment of the tumors without surgery can be achieved by incorporation of cytological grading system in fine needle aspiration cytology (FNAC) smears of breast carcinoma and thereby morbidity due to surgical intervention, especially in low-grade tumors can be avoided.[4,5] Previously, the role of FNAC has been challenged by results obtained with core needle biopsy (CNB) that seems more robust than FNAC. In general, CNB is now preferred in the first line of diagnosis.[6] However, CNB carries complications such as pain (1.7-3.7%), vasovagal reactions (1%), severe bleeding (0.72%), infections (0.15%), and hematoma (0.09%).[7] FNAC has more advantages than CNB such as minimal invasiveness and minimal discomfort that could be interesting for aged or frailty patients with comorbidities.[8] FNAC is also easier/safer in certain lesions such as very small lesions, lesions just under the skin or very close to the chest wall compared to CNB. In addition, FNAC maintains tactile sensitivity, allows multidirectional passes allowing a broader sampling of lesion and immediate reporting where necessary.[9] Use of FNAC is essentially true in underdeveloped/developing countries, where the tissue CNB still is not used as a standard practice to sample newly diagnosed cases of carcinoma breast.[10] The National Cancer Institute, Bethesda, sponsored conference had also recommended that in FNAC reports of breast carcinoma, tumor grade should be incorporated for prognostication.[11] It was also emphasized that the cytological grading system on FNAC smears should correspond to the histological grading system.

After obtaining approval from institutional ethical committee, a total of 94 cases of breast carcinoma diagnosed by FNAC from July 2012 to January 2015 were included, and histopathological correlation was done in this retrospective study. 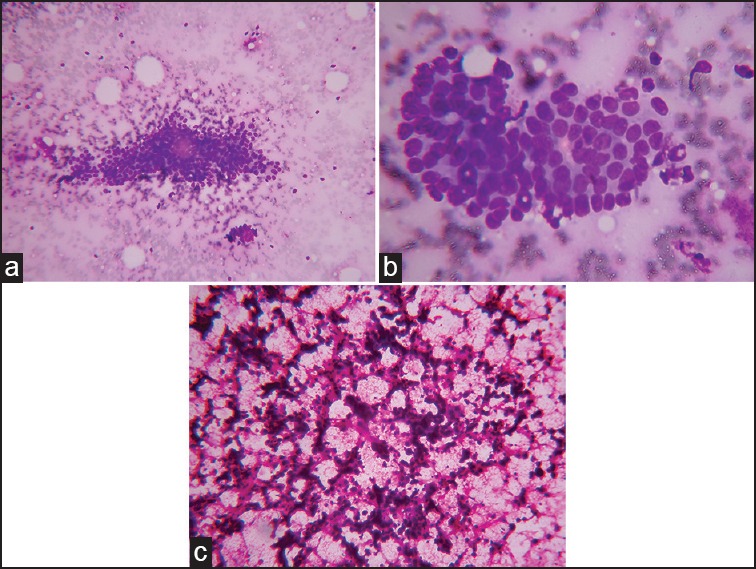 Taniguchi et al. grading[4] included seven cytological parameters such as necrosis, cellular size, nuclear-cytoplasmic ratio, nuclear pleomorphism, nucleoli, chromatin granularity, and density of chromatin. All the parameters were scored from 1 to 3 except necrosis which was scored 0 or 1 and total in the range of 6-9 were Grade I, 10-11 were Grade II, and 12-19 were Grade III.

In Khan et al. grading,[16] six parameters such as pleomorphism, nuclear size, nuclear margins, nucleoli, naked tumor nuclei, and mitotic count were given a score of 1-3, and the tumors were Graded I if the combined score was 6-10, II for a score ranging from 11 to 14, and III for score from 15 to 18. 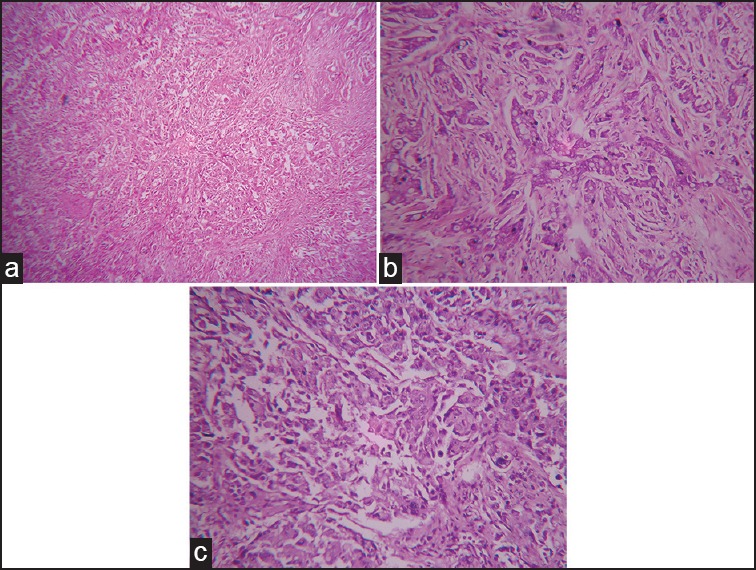 The results were tabulated, and statistical analyses were done with the IBM SPSS Statistics for Windows (version 20.0. Armonk, New York: IBM Corporation). Association between different grading systems was assessed by Chi-square test. Correlation of various cytological grading system of FNAC smears were done by Spearman's correlation coefficient (r) and Kendall's tau-b rank correlation coefficient (t). Agreement or concordance was assessed by kappa measurement of agreement (k). The P value of 0.05 or less was considered for statistical significance.

Ninety-four cases of invasive ductal carcinoma, not otherwise specified were studied. Overall, the majority of cases were Grade II followed by Grade I and III. The distribution of cases according to various 3-tier cytological grading systems and histological grading is shown in Table 1.

In both nonneoplastic and neoplastic breast lesions, FNAC generally considered as a rapid, reliable, and safe diagnostic tool. FNAC is the initial method of pathological assessment as a component of the triple test in the diagnosis of palpable breast lesions in developing countries.

Comparison of correlation, concordance and interobserver agreement with other studies

Even though FNAC considered as rapid, relatively inexpensive, and less traumatic procedure, it has certain limitations includes inadequate cell yield which mainly occur due to sclerotic fibroadenomas, sclerosing ductal carcinoma, and infiltrating lobular carcinoma, less reliable at differentiating invasive cancer from ductal carcinoma in situ and moreover, it require considerable experience for the interpretation of smears.