Background: Head and neck cancer is the third most common cancer in India with 60% presenting in advanced stages. There is the emerging role of neoadjuvant chemotherapy (NACT) in the management of these advanced cancers. There is a general perception that complication rates are higher with the use of NACT. Materials and Methods: This is a retrospectively collected data of head and neck cancer patients operated at our hospital from March 2013 to September 2014. A total of 205 patients were included in the study. These patients were studied in two groups. Group 1 included 153 patients who underwent surgery alone, and Group 2 included 52 patients who received 2-3 cycles of NACT followed by surgery. Results: The mean age of the population was 51 years in the Group 1 and 45 years in Group 2. The hospital stay and readmissions in postoperative period were similar in the two groups. In this study, the complication rate was 37.9% in the surgery patients and 30.8% in the NACT patients (P = 0.424). Conclusion: The postoperative complication rates in patients who received NACT followed by surgery were not significantly different from those who underwent surgery.

Head and neck cancer is the third most common cancer in India with 60% presenting in advanced stages. There is the emerging role of neoadjuvant chemotherapy (NACT) in the management of these advanced cancers. There is a general perception that complication rates are higher with the use of NACT.

This is a retrospectively collected data of head and neck cancer patients operated at our hospital from March 2013 to September 2014. A total of 205 patients were included in the study. These patients were studied in two groups. Group 1 included 153 patients who underwent surgery alone, and Group 2 included 52 patients who received 2-3 cycles of NACT followed by surgery.

The mean age of the population was 51 years in the Group 1 and 45 years in Group 2. The hospital stay and readmissions in postoperative period were similar in the two groups. In this study, the complication rate was 37.9% in the surgery patients and 30.8% in the NACT patients (P = 0.424).

The postoperative complication rates in patients who received NACT followed by surgery were not significantly different from those who underwent surgery.

NACT is useful in reducing the tumor volume and thus making unresectable tumors resectable.[4,5] It may be helpful in organ preservation and thus avoiding complex morbid surgeries with functional disabilities.[6] NACT is useful in assessing tumor response to chemotherapy, selecting appropriate local treatment and improving survival. It has a theoretical benefit in control of micrometastasis, thus improving local and systemic control.[7,8,9,10,11] We routinely use neoadjuvant at our center for locally advanced head and neck cancers, when it is questionable to achieve free margins of resection following surgery.[4]

Various factors play a role in wound healing in the postoperative period in cancer patients. These include nutritional status, disease stage and the type of treatment planned. Radiation therapy is known to impair wound healing when doses larger than 50 Gy are given, or radiotherapy is given < 3 weeks before surgery.[7,8,9,10,11,12,13] The toxicity associated with NACT can contribute to postoperative mortality and morbidity. However, most of the studies have shown that NACT does not increase postoperative morbidity.[14,15,16,17,18] There are no similar studies in head and neck cancers. The aim of this study was to find out if the use of chemotherapy was associated with increased complications in the postoperative period.

This is a retrospectively collected data of head and neck cancer patients operated at our hospital from March 2013 to September 2014. The aim was to compare complications and mortality in first 30 days in the postoperative period between patients receiving NACT followed by surgery and those treated with surgery alone in head and neck cancer. A total of 205 patients were included in the study. The data were collected from the electronic medical record of the hospital.

Since this was a retrospective collection of data, we divided patients into two groups depending upon whether patients received NACT followed by surgery or upfront surgery without NACT. Group 1 included 153 patients who underwent surgery immediately after diagnosis, and Group 2 included 52 patients who received 2-3 cycles of NACT followed by surgery. Cases were selected based on the following eligibility criteria:

The reasons for giving NACT in these groups of patients included edema reaching up to zygoma in buccal mucosa-alveolus complex lesions, tongue cancers close to mandible, extensive exolaryngeal disease in soft tissues of neck in carcinoma of larynx, and hypopharynx.

The primary objective of the study was to assess the difference in complication rates between Groups 1 and 2. The NACT drug regimens used included two or three drug chemotherapy. NACT was given as two drug regimen with 3 weekly regimens of cisplatin and docetaxel as 75 mg/m2 each on day 1 or three drug regimen with 5-flurouracil as 750 mg/m2 as 24 h intravenous infusion for 5 days for 3 cycles along with cisplatin and docetaxel. Patients receiving three drug regimens were given granulocyte-colony stimulating factor prophylactically from day 6 to day 12. Tablet levofloxacin 500 mg once daily was given for the same duration as a primary prophylaxis for bacterial infections. 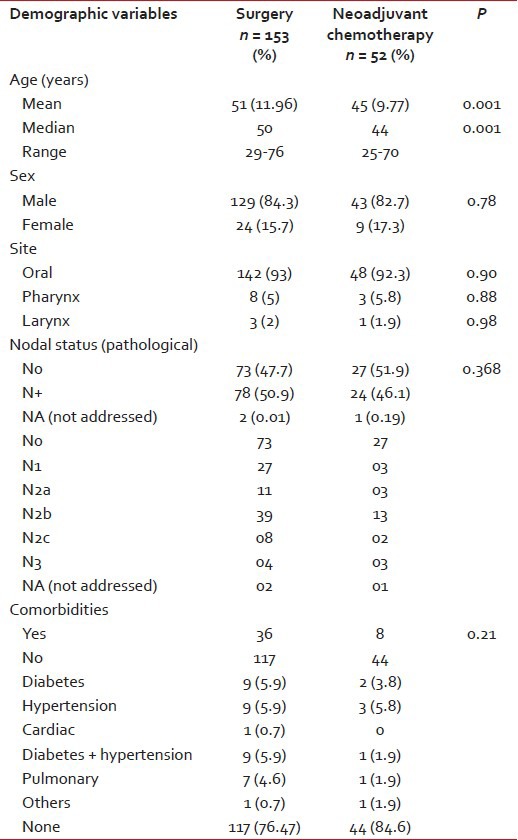 The mean (and median) value of hemoglobin and albumin was higher in Group 1 as compared to Group 2 (P < 0.05). The preoperative and postoperative absolute neutrophil count (ANC) was similar in both the groups with (P = 0.65) as shown in Table 2. 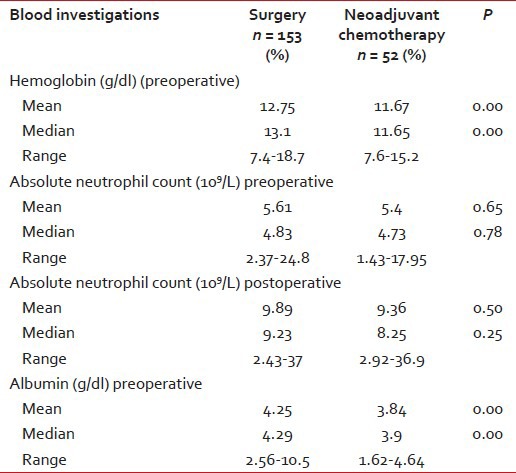 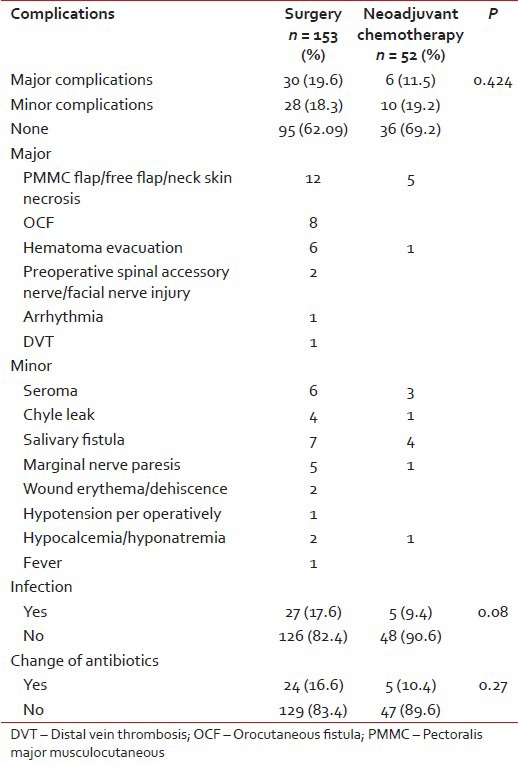 The antibiotics used at our hospital in the postoperative period are the third generation cephalosporins. In case of infection such as flap necrosis, fistula communicating oral cavity to neck, and collection in neck/collection beneath the flap, prolonged antibiotics were given (for more than 7 postoperative days). Twenty-seven patients (17.6%) had an infection in Group 1 and 25 were given prolonged antibiotics. Change to higher generation antibiotics was done in 24 patients. The higher antibiotics included a combination of cefoperazone and amikacin and piperacillin-tazobactam depending upon the culture-sensitivity. In Group 2, 5 (9.3%) patients had an infection with the change to higher antibiotics in all 5 patients.

Six (4%) patients in Group 1 had hemorrhage in the postoperative period, and only 1 patient (1.9%) in Group 2 had hemorrhage. Exploration was done in 15 (9.8%) patients in Group 1 for hematoma evacuation, seroma, chyle leak, and flap failure. Six explorations were done in Group 2 for flap necrosis and hematoma evacuation. Various other complications such as hypotension, hyponatremia, and arrhythmias were seen in other patients, as shown in Table 3.

Most of the patients included in the study were advanced stage tumors. Preoperatively, one patient was inoperable in Group 1 and 2 were inoperable in Group 2. There were no deaths peri operatively. The operative time was ≥4 h in the majority of the cases in both the groups (P = 0.098). The hospital stay and a number of readmissions in postoperative period were similar in the two groups (P insignificant). The mean blood loss in the first group was 698 ml as compared to 906 ml in the second group as shown in Table 4. 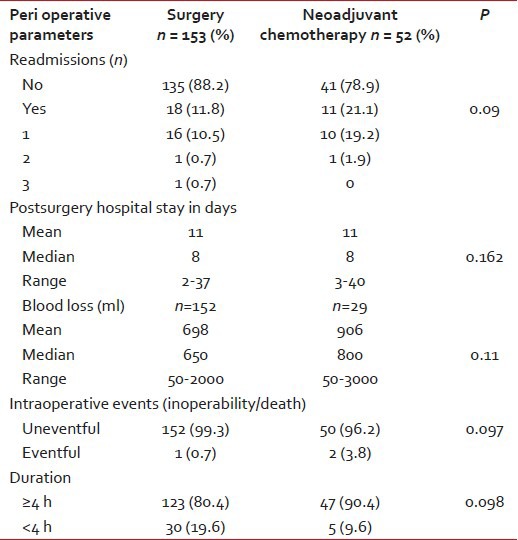 This needs to be taken with caution since in Group 2 the data were available in 29 patients only (P = 0.11). Hence, this could be misleading due to small sample size of the patients.

The treatment of head and neck cancers involves resection of the tumor with wide margins and regional lymph node dissection. Resection in advanced cancers is associated with significant morbidity. There has been an increasing trend for the use of NACT in advanced head and neck cancers in the last decade. This was after the promising data showing the benefit of NACT in reducing the tumor volume, and organ preservation was published.[19]

Multiple experimental studies on animals have shown that chemotherapy drugs target rapidly dividing cells and thus cause apoptosis of tumor cells. But, the normal dividing cells like macrophages and fibroblasts are also susceptible. This affects the inflammatory phase delaying the wound healing.[20] This hypothesis suggests that we should have a more infective complication in the postoperative period, but infection rates were similar in both the arms. It is possible that patients after chemotherapy may have improvement in symptoms related to cancer which may result in better nutritional intake and thus lesser negative impact on immunity.

ANC has high sensitivity in detecting acute bacterial infections.[21] In this study, values below or above the normal range (2.0-7.0 × 109/L) were considered abnormal with the higher risk of infection. The mean preoperative ANC value was 5.6 × 109/L in Group 1 and 5.4 × 109/L in Group 2. The mean postoperative values ANC values were high (>7.0 × 109/L) in both the groups with no difference statistically. Thus, patients who received NACT did not have abnormal ANCs as compared to surgery group and hence no higher risk of infection.

Alkylating agents such as cyclophosphamide, cisplatin and antimetabolites such as methotrexate, 5-fluorouracil decrease wound tensile strength and impede wound healing during the early proliferative phase in animal studies.[22,23] However, most of the studies on humans have shown no increased risk of wound complications or delayed healing with neoadjuvant and adjuvant chemotherapy at therapeutic doses.[24,25] In our patients, we used taxanes with platinum. It is possible that there is the differential impact on wound healing by different drugs.

The meta-analysis of NACT in esophageal carcinoma,[14] gastric carcinoma,[15] and bladder carcinoma[17] has shown that there was no difference in rate or severity of preoperative or postoperative complications post-NACT. NACT did not prevent patients from undergoing cystectomy for bladder cancers[17] and was associated with a 6.5% absolute benefit in 5-year overall survival.[26]

Patients in the Group 1 (surgery) were older than those in Group 2 (P = 0.001). For analysis purpose, patients in both groups were divided according to age into those with age >65 years or ≤65. But patients with age >65 were not associated with the development of postoperative complications or longer hospital stay when compared with those with age ≤65 (P value not significant).

The numbers of readmissions and preoperative events were the same in the two groups. The mean hemoglobin level and albumin levels which are indicators of the nutritional status of the patient showed higher values in Group 1 (surgery) as compared to Group 2 (NACT). This could be due to larger tumors being given NACT, which had functional difficulty in swallowing. However, this did not reach a value of statistical significance.

Our study showed that the mean preoperative blood loss associated with Group 2 (NACT) was higher as compared to Group 1 (surgery). However, the blood loss was available in only 56% of patients in Group 2. Thus, it is difficult to infer the association of NACT with blood loss with our study. Most of the studies in the literature show no increased blood loss with the use of chemotherapy.[27,28]

This is the first study of its kind in head and neck cancer comparing complications in NACT patients undergoing surgery versus upfront surgery. It appears that postoperative major or minor complication rate does not increase following chemotherapy in head and neck cancer. There is a concern of increase blood loss following surgery which needs to be confirmed in further study.