MEDLINE and Web of science electronic database was searched from January 1995 to December 2013, using the using keywords “laryngeal cancer, laryngeal cancer outcome, epidemiology, etiological factor and their corresponding Mesh terms were used in combination like OR, AND.” Two authors independently selected studies published in English and conducted in India. A total of 15 studies were found to be relevant and eligible for this review.

There is wide regional variation in the incidence of laryngeal cancer in India. Survival rates of laryngeal carcinoma are much lower as compared to other Asian countries. Studies conducted in India to identify important risk factors of laryngeal cancer are very limited, especially on diet and indoor air pollution. Hence, more research is required for identifying the etiological factors and development of scientifically sound laryngeal cancer prevention programs.

Laryngeal cancer is the ninth and seventh most common cause of cancer in males in Asia and India respectively. In 2012, an estimated 25,446 new case were diagnosed, and 17,560 Indians lost their lives from laryngeal cancer.[1] In India, the incidence of laryngeal cancer has been reported to be 1.26-8.18 per 100,000 population, in different regions in the country.[2] Epidemiological studies carried out on laryngeal cancer have highlighted the peculiarities of the disease, like varying risk factors and wide regional variation in incidence and survival. This review includes an update on the distribution of laryngeal cancer in India, as well as publication on the association between various risk factors.

Information was gathered from a review of peer-reviewed publications on laryngeal cancer in India. MEDLINE (http://www.pubmed.com) and Web of science electronic database was searched from January 1995 to December 2013, using the using keywords such as “laryngeal cancer, treatment, clinical characteristics, laryngeal cancer outcome, epidemiology, etiological factor and their corresponding Mesh terms were used in combination like OR, AND.” We also examined bibliographies of included articles to identify additional references. The search strategy was limited to English language. Only journal article type was included. Figure 1 presents the search strategy and screening process. 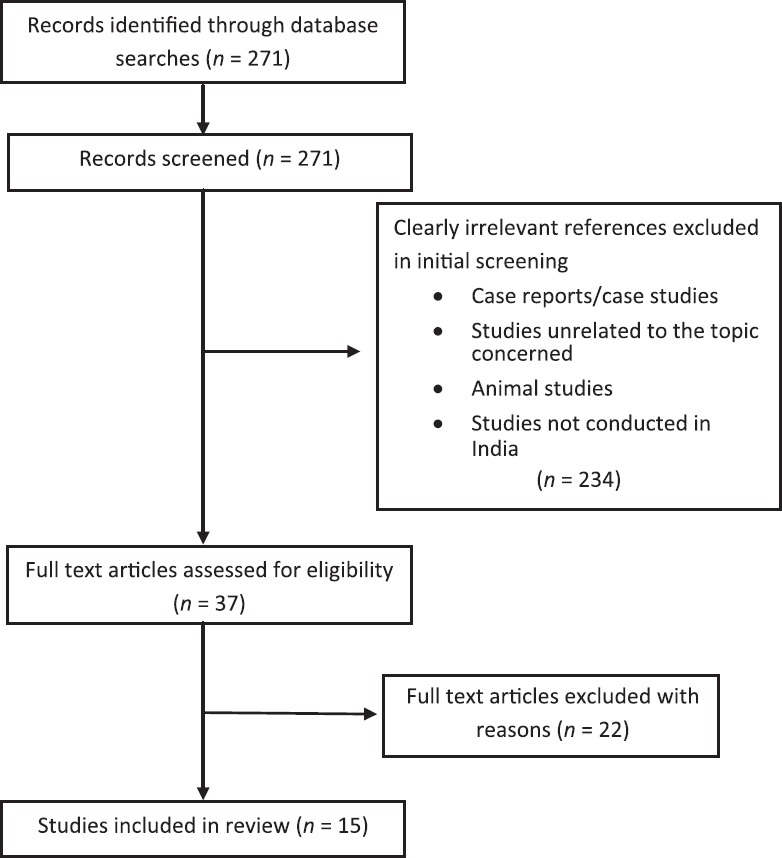 The title and abstract of each citation were screened first, and full report was screened next, if necessary, to select the relevant articles according to selection the criteria. Full texts of these selected studies were retrieved, reviewed and extracted for relevant data by authors independently. A total of 15 studies were included in the review and their findings presented. The descriptive statistical data for laryngeal cancer were mainly obtained from publications of the Indian Cancer Registry, UICC, International Agency for Research on Cancer (IARC) and WHO (GLOBOCON-2012). 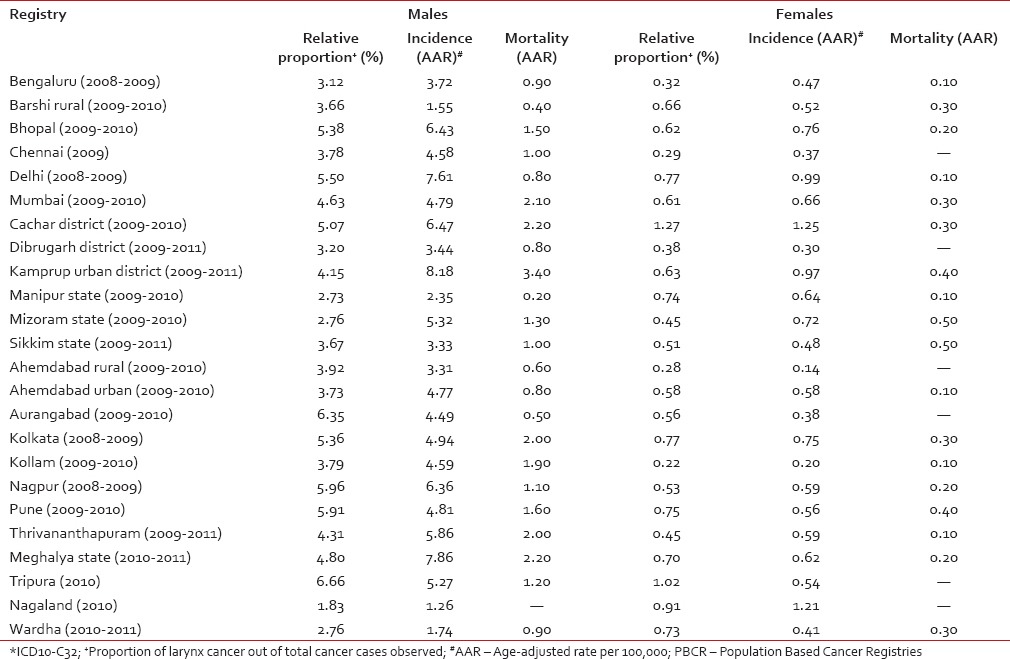 More than 50% of patients in both males and females were older than 60 years. The maximum numbers of cases were reported in the age group of 60-69 years amounting to 31.93% of all larynx carcinoma in males and 27.29% in females[2] [Table 3]. Data from HBCR show that almost 70% of all female cases and 50% of male cases were either illiterate or had primary level education[4] [Table 4]. Data from HBCR also indicate that almost 80% of both male and female cases had regional diseases at the time of presentation[5] [Table 5]. 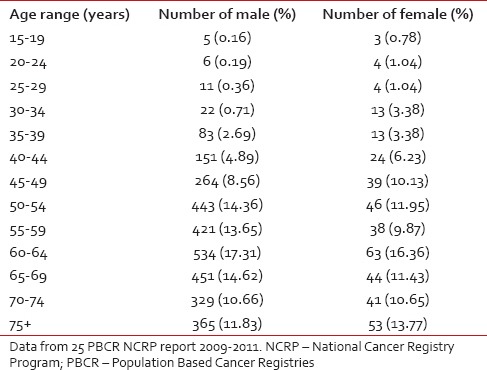 Distribution of larynx cancer as per educational status

Clinical extent of the disease (larynx cancer) at presentation

The 5-year survival rate for cancer larynx in India is approximately 28%.[6] This indicates that prognosis from cancer larynx remains poor as compared to other Asian countries such as China, South Korea, and Singapore [Table 6]. A wide variation of survival rates is also observed between rural and urban India. This could be because Indian registries suffer with the problem of under-reporting of death, which is more pronounced in the rural area. In addition, the lack of health infrastructure in rural India results in lower survival rates as compared to urban areas. The 5-year age-standardized relative survival of laryngeal cancer for different Indian registries and its comparison with other Asian registries is shown in Table 6.[6,7] 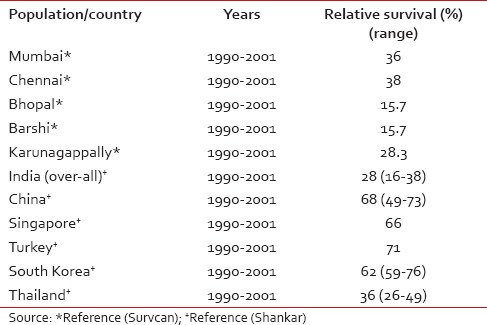 The most important risk factor for cancer larynx appears to be the tobacco use. National Cancer Registry Program enlists laryngeal cancer as one of the tobacco-related cancer.[8] The IARC monograph also classifies tobacco use as a carcinogenic to humans based on overwhelming on epidemiological evidence.[9] A large number of case-control and cohort studies conducted in various parts of the world have observed many fold increase in cancer larynx with the use of various forms of tobacco.[10,11,12]

In India, tobacco is both chewed and smoked in several forms. A common form of smoking tobacco is “bidi” an Indian cigarette, containing 0.2-0.3 g of tobacco rolled in a dried leaf, usually temburni leaf (Diospyros mylanoxylon). The other types of smoking in India are described by Sanghvi et al.[13] Many studies on laryngeal cancer in India implicated smoking as a risk factor. The risk level varied from 1.5-fold to 7-fold for different forms of tobacco smoking. In one of the earlier studies, Rao et al.[14] found that biddi and cigarette smoking to be associated with cancer of the larynx, however, the risk of laryngeal cancer was found to be much more for bidi than for cigarette. Other subsequent case-control studies also found bidi and cigarette smoking to be significantly associated with laryngeal carcinoma.[15,16,17] A cohort study of 65,553 men aged 30-84 in Karunagappally Taluk, Kerala also found that laryngeal cancer was strongly related to bidi and cigarette smoking as well as the number smoked per day (P < 0.001) and duration of smoking (P < 0.001), bidi smoking was found to have higher risk than cigarette smoking [Table 7].[18]

Association between tobacco and carcinoma larynx 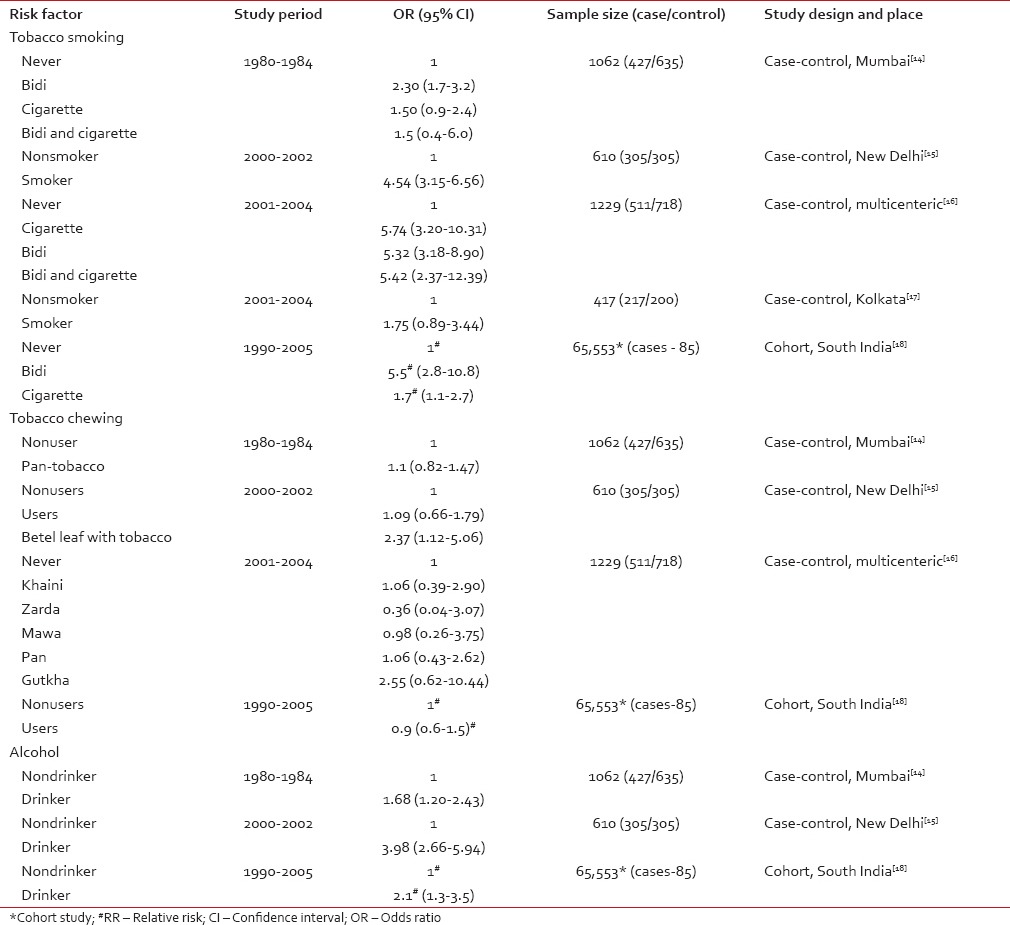 Besides tobacco use, alcohol consumption has also been implicated as a risk factor in the development of laryngeal carcinoma. There is a dearth of Indian studies on the association between alcohol and laryngeal cancer, mainly due to social stigma associated with the alcohol habit and ban on alcohol drinking in certain states of India. Furthermore, women in India do not openly admit to the habit of alcohol consumption.[14] However, a few case-control studies and one cohort study found an almost 2-4-fold increase in risk of laryngeal cancer due to alcohol consumption [Table 7].[14,15,16] These studies, provide evidence of alcohol as an additional risk factor for laryngeal carcinoma, which is in conformity with several western studies.[10,11,12,20,21]

International Agency for Research on Cancer monograph on indoor air pollution classifies indoor air pollution from coal usage as a known human carcinogen (IARC Group 1), while that from biomass (primarily wood) as a probable human carcinogen (IARC Group 2A).[22,23] In a developing country like India where as much as 74% of the total population uses solid fuels for cooking,[24] it has been estimated that indoor air pollution may account for up to 4-6% of the national burden of disease.[25] A multicentric case-control study conducted in India between 2001 and 2004, found no increased risk of laryngeal cancer among ever-users of solid fuels compared to lifelong users of modern fuel. However, long duration (>50 years) of coal usage was found to be a risk with duration-dependent increase in risk for laryngeal cancer[26] [Table 8]. One of the major limitations of this study was low proportion of female study participants (male 478, female 33), as women in India spend a greater proportion of their time indoors performing various cooking related activities, the intensity of exposure is likely to be higher among women compared with men. Considering that, this was the only study in India which has tried to assess indoor air pollution as a risk factor for laryngeal carcinoma, it would be worthwhile to plan a study with larger proportion of female participants to explore the differential risk between males and females.

It is very evident from the large number of studies conducted across the globe that tobacco and alcohol are perhaps important risk factors for laryngeal cancer. The risk rises with increasing levels of smoking and alcohol drinking, each agent approximately multiplying the effects of the other.[31,32] Thus, studies conducted to examine the effect of stopping smoking, drinking or both have demonstrated that the risk laryngeal cancer appears to decline steeply with time, by over 70% in 10 or more years after stopping smoking,[33,34,35] however the similar clear pattern with stoppage of drinking has not been demonstrated.[35,36,37] These effects of smoking and drinking cessation are from western studies, and similar studies have not been done in India. Indians have one of the most interesting diets, with many unique dietary constituents that have promise for cancer prevention. A few epidemiological studies exploring the relationships between diet, lifestyle and cancer have been carried out in India, but none in respect of diet and prevention of laryngeal carcinoma.

Laryngeal cancer has a varying distribution in India. Some regions report a decreasing while others report an increasing trend. Indian studies have well-established tobacco smoking and alcohol as major risk factors for laryngeal carcinoma. Studies from India exploring the role of factors such as diet and indoor air pollution are limited. There is a need to conduct well-designed studies to understand the etiology of laryngeal cancer and implement preventive programs.