The study was designed to evaluate the beneficial role of induction PF chemotherapy and interferon-alpha2b followed by chemoradiation over definitive chemoradiation only for patients with locally advanced carcinoma of oral tongue.

Fifty patients were randomized into 2 arms. Arm A patients were treated with induction chemotherapy with PF regimen for 3 cycles and interferon alpha 2b, 3MU biweekly for 6 such followed by chemoradiation with cisplatin 30 mg/ m2/ week and external radiotherapy. Arm B patients received chemoradiation only, in the same dose schedule as in Arm A. Statistical analysis used: Chi-square test was done to find out the statistical correlation between the two arms. For plotting the disease-free survival (DFS) and overall survival (OS) for the two arms, Kaplan-Meier method was used.

In locally advanced carcinoma of oral tongue, induction chemotherapy with cisplatin and 5-fluorouracil (PF) along with interferon alpha 2b followed by concurrent chemoradiation may produce superior loco-regional control with manageable toxicities that needs to be validated by more randomized trials with adequate number of patients.

Cancer of oral cavity and lip accounts for 10.6% of all cancers in men and 4.7% in women of India. The estimated age-adjusted incidence rate was 7.5% for both sexes in the year 2010. [1] The most common subsite for oral cavity cancer is tongue.

Tobacco and alcohol are known risk factors for carcinoma of the tongue and the effect of alcohol and tobacco seems to be synergistic. [2] Tobacco is consumed in various forms in India such as gutkha, zarda, kharra, mawa, and khaini. Researchers have found smoking to be an independent risk factor in 80-90% cases of oral cavity cancer. [3] Cessation of smoking reduces the risk of cancer of the oral cavity by 30-50%depending on the period of quitting. [4]

The preferred treatment option for locally advanced lesions (T3 N0) is surgery for primary and neck followed by external radiotherapy or concurrent chemoradiation (CRT). Patients presenting with T4a or N1-3 lesions are treated with surgery for primary and neck followed by CRT or radiotherapy alone. If the disease is unresectable, CRT is considered to be the standard management. Alternatively, induction chemotherapy followed by CRT is another valid option for the unresectable disease.

In CRT, where chemotherapeutic agents are used as radiation sensitizers, chemotherapy allows higher loco-regional dose density and has demonstrated superior organ preservation, disease control, and survival in patients with advanced disease. [5,6] However, CRT has also been shown to increase toxicity, particularly mucositis, and is not effective in eliminating distant metastases. [5]

Induction chemotherapy with cisplatin and 5-fluorouracil (PF) was developed in late 1970s based on the finding that PF induction chemotherapy could eliminate the necessity for surgery while maintaining survival rates. [7] The PF regimen was developed at Wayne State University, Detroit. Induction chemotherapy with PF has several benefits including high response rate, organ preservation, longer survival, systemic treatment, reduced tumor volume before definitive loco-regional treatment, better function, and intermediate assessment of response. [8,9,10] The use of induction chemotherapy is based on the postulate that the drug delivery is expected to be better in untreated well vascularized tumors that micrometastatic disease would be nipped in the bud and the tumor shrinkage would occur before surgery/radiotherapy. [11]

In the present study, interferon α-2b has been combined with cisplatin and 5-fluorouracil in a induction setting to modify the host response to tumor and to assess it indirectly by observing the subsequent tolerance to CRT and also by noting the response of the tumor.

The primary endpoint of the study was to observe the response and tolerance to treatment of the patients. The other parameter which was compared was the survival function within a period of study.

Hypothesis: To compare the outcome of two treatment modalities.

The patients who were found to be suitable for inclusion (biopsy proven newly diagnosed and untreated locally advanced carcinoma of oral tongue: AJCC stage III-IVB, patients between 15 and 65 years of age, Karnofsky performance status (KPS) of >60%, having hemoglobin level >10 g/dL, total leukocyte count >4,000/cmm, platelet count >100,000/cmm, normal liver function test, and renal function test [RFT]) in the study were taken for voluntary participation after taking proper informed consent. The study was approved by Institutional Ethical Committee. After accrual, the patients were randomized into study arm and control arm.

Patients of study arm received induction chemotherapy containing cisplatin and 5-fluorouracil with interferon α-2b followed by cisplatin-based CRT. Three cycles of cisplatin and 5-fluorouracil were given at 3 weekly intervals. The dose of cisplatin was 70 mg/m2 infused over 2 h on day 1, and that of 5-fluorouracil was 500 mg/m2 /day in 72 h of continuous infusion (day 1 to day 3). Interferon α-2b was given at the dose of 3 MU subcutaneously, biweekly for 3 weeks. This was followed by CRT after 3 weeks of completion of induction chemotherapy with cisplatin at a dose of 30 mg/m2 weekly for 6 weeks along with external beam radiotherapy (EBRT). The radiation was given in shrinking field technique, Phase I included primary tumor, enlarged lymph nodes and potential microscopic spread. As all the patients were clinically node-positive, all levels of neck nodes were included in Phase I. Spinal cord was shielded after 44 Gy and total radiation dose of 56 Gy in 28 fractions, 5 days a week, was given in Phase I. In Phase II, boost dose was given to primary with 2 cm margin and enlarged lymph nodes up to a total dose of 70 Gy in 35 fractions.

In control arm, patients received CRT only with cisplatin at a dose of 30 mg/m2 weekly for 6 weeks along with EBRT, dosage schedule, and technique was same as the CRT in study arm.

Patients were monitored weekly clinically and with CBC and RFT done before each cycle of chemotherapy and weekly during CRT.

All patients had their first checkup at 1-month after completion of therapy and they were assessed in a joint clinic for response, clinically and radiologically (CT scan of the oral cavity and neck region) after 3 months of completion of treatment.

Patients who achieved complete response (CR) were enrolled for a follow-up program. Patients who had pathologically proved residual disease underwent surgical resection. Nodal dissection was done in patients who had residual nodal enlargement.

Chi-square test and also corrected Chi-square test were done to find out the statistical correlation between the two arms. Furthermore, test of proportion (Z-test) was used to compare the proportions. For plotting the disease-free survival (DFS) and overall survival (OS) for the two arms, Kaplan-Meier survival curve was obtained. In case of disappearance of the disease confirmed at 12 weeks after completion of treatment, the cases were included in CR category whereas the cases who had at least 50% decrease in tumor size were included in partial response (PR) category. Progressive disease was defined as 25% increase in tumor size over a persistent disease.

A sample of 50 patients with power 82%, total of 50 patients with biopsy-proven diagnosis of carcinoma of oral tongue (Stage III-IVB) were enrolled in this study between September, 2008 and December, 2010. The clinical characteristics are presented in the table. There were no statistically significant differences found between the arms regarding age, sex, KPS, stage wise distribution, and tumor differentiation [Tables ​[Tables11 and ​and22]. 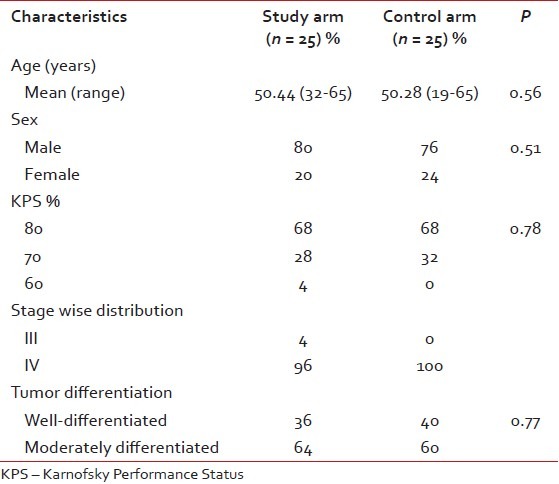 All patients completed full course of treatment, and none required reduction of dose reduction during therapy due to toxicity. 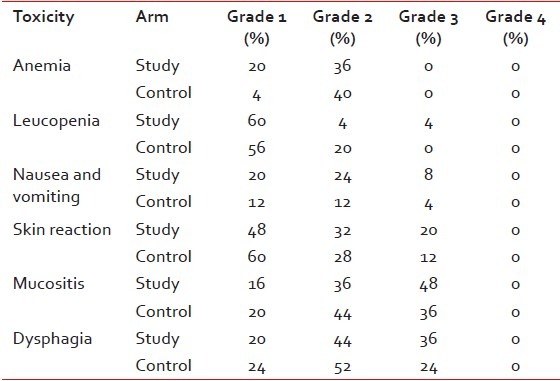 On a median follow-up of 15 months, 87% patients of study arm and 69% for the control arm had DFS. Survival benefit in disease-free condition was evident from following Kaplan-Meier survival curve, though the difference was not statistically significant [Log Rank 2.63, df =1, P = 0.104; refer to Figure 2]. At the end of the same follow-up period, 5 patients of study arm and 10 patients of control arm had expired, plotted in the following OS curve. The difference in OS within the short follow-up period was not statistically significant (P = 0.43) [Figure 1]. 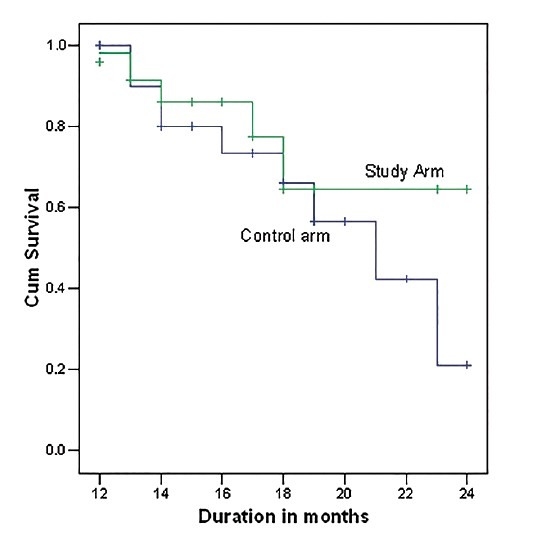 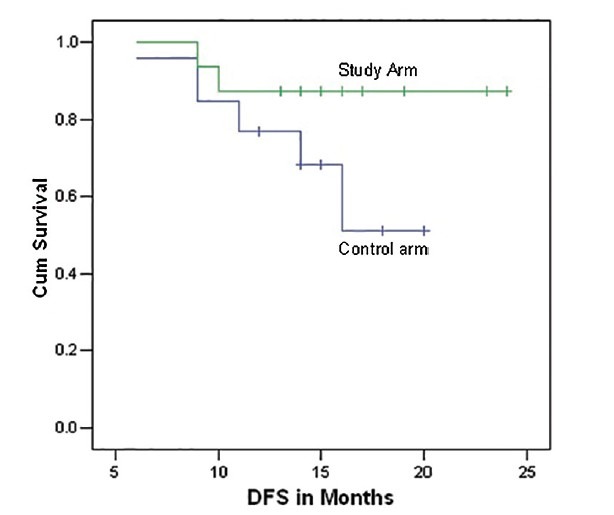 Carcinoma of the tongue is the most common cancer of the oral cavity. Though early stage disease is potentially curable, majority of patients in India present in advanced stages, hence are inoperable with a worse prognosis. The 5-year relative survival rate for oral cavity cancer is 63% when all stages are combined. [12] Initially, the treatment was focused on surgery with or without radiotherapy or radiotherapy alone for advanced and inoperable cancers of tongue. It has been found that 50-60% patients with advanced loco-regional squamous cell carcinoma of head and neck who are treated with surgery, radiotherapy, or both develop loco-regional recurrence within 2 years of primary treatment. [13]

The present study compared two modalities of regimens for the treatment of locally advanced carcinoma of oral tongue:

Treatment duration varied significantly between the two arms. As per the treatment protocol the minimum treatment duration for patients of study arm was 16 weeks, and that of control arm was 7 weeks. The treatment duration was prolonged for 23 patients of study arm and 12 patients of control arm. For the majority of the patients, this delay was < 10 days. Only 2 patients of study arm and one patient of control arm had protracted treatment of 11-15 days. The difference was statistically significant when the number of patients having interruption of treatment up to 5 days was compared to that of more than 5 days between two arms (P = 0.041). In the study arm, the chief reason for treatment interruption was mucositis (44%). The other reasons were dysphagia (36%), skin reaction (16%), anemia (12%), nausea and vomiting (8%), and leucopenia (4%). In the control arm, the reasons of interruption were anemia (28%), mucositis (12%), skin reaction (12%), dysphagia (12%), leukopenia (12%), and nausea and vomiting (4%). In the SWOG study, 1 patient out of 37 cases of carcinoma of BOT could not complete induction chemotherapy due to toxicity and 1 patient out of 29 patients could not complete CRT due to development of metastasis. In the study of Bhide et al. 119 out of 129 patients completed full dose induction chemotherapy. There was no incidence of death related to toxicity during induction chemotherapy and CRT.

Thus in the present work, the results are comparable with the results of the standard treatment and it is evident that sequential induction chemotherapy followed by CRT produces better response without any significant increase in toxicity than CRT alone.

In the study arm, 87% patients had DFS at last follow-up while in the control arm, 69% patients remained disease free. Local recurrence occurred in two patients (8%) of study arm and four patients (16%) of control arm. No incidences of distant metastases were found in either arm. The study by Bhide et al. reported LRC rates of 75% and 71% at 1 and 2 years, respectively. The estimated the 3-year PFS was 62% in the SWOG study for patients with cancer of BOT.

Thus, it can be inferred that induction chemotherapy with PF along with interferon α-2b followed by cisplatin-based CRT may prove to be a superior treatment modality for achieving better response for locally advanced carcinoma of oral tongue, however, the treatment interruption has to be minimized so that it can be completed within stipulated period.

The response rate of advanced carcinoma of oral tongue with interferon containing induction chemotherapy followed by concurrent CRT may be superior to concurrent CRT only. If the toxicity can be managed adequately and the treatment duration is restricted within the stipulated period, it may produce a significant response rate with survival benefit.

Sequential induction chemotherapy and concurrent CRT may offer superior LRC for advanced carcinoma of oral tongue with manageable toxicities that needs to be validated by randomized controlled trials with an adequate number of patients.