A 37-year-old man presented with right groin pain which was thought to be a hernia due to excess working out. He was given analgesics and subsequently the pain resolved. Months after the initial presentation, the pain returned and he again sought medical attention. He reported severe groin pain that originated in the right groin and radiated posterior to the right buttock, thigh, and leg. He also complained of anterior sternal pain and tenderness. In addition to the pain, he also endorsed a 40-pound weight loss over the past six months and also claimed to have a decreased appetite. Furthermore, he also reported several weeks of jaundice and darkening of his urine. He did have some constipation for the past one week, but denied any abnormality of his stool consistency, denied bright red blood or melanic stools. He denied any fevers, chills, or night sweats.

Of note, at six months of age, he was found to have a bladder cancer; specifics were unknown by him or his family. As per his family, it was initially resected without the need for any adjuvant chemotherapy or radiation. Throughout his childhood, he had recurrent urinary tract infections which eventually by the age of nine years required an ileal conduit to be surgically constructed. Following this surgery, the remainder of his childhood and adult life was healthy and normal.

On initial examination, he had tachycardia, scleral icterus, a large tender lesion on anterior chest wall, bilateral tender inguinal lymphadenopathy, tenderness on pubic symphysis and right iliac bone, and numbness over his thighs. He was unable to flex his hips.

He was evaluated with various imaging modalities and procedures to come to a final diagnosis. Imaging by computed tomography (CT) scan revealed innumerable pulmonary nodules, multifocal hepatic lesions, inguinal and retroperitoneal lymphadenopathy, an ill-defined mass in the anterior lower pelvis [Figure 1], as well as multiple lytic lesions in the pelvis. A liver biopsy was performed, results of which showed metastatic adenocarcinoma, positive for CK-7, CK-20, and MOC-31. Tissue biopsy of the left inguinal node revealed a moderately differentiated adenocarcinoma that was strongly positive for CK-8/18/19, Cam 5.2, CK-20, CK-19, and Beta-Catenin, suggestive of gastrointestinal or pancreatobiliary adenocarcinoma [Figure 2]. Due to these findings, an ERCP (Endoscopic Retrograde Cholangiopancreatography) was warranted which showed a malignant appearing biliary stricture in the proximal bile duct. Although this appeared to be the likely primary of the cancer, a testicular ultrasound was ordered to rule out any germ cell tumors and the results came back normal. At this time, various tumor markers were drawn, including CEA, AFP, and Ca 19-9; levels came back as 272.5, 4.8, and 69, respectively. Although it appeared likely to be from the biliary tract based on the ERCP, this was only speculation and did not entirely fit with the tumor markers. 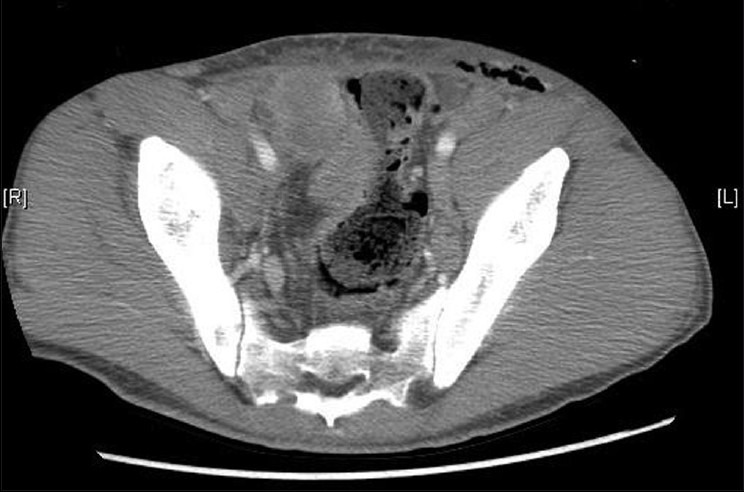 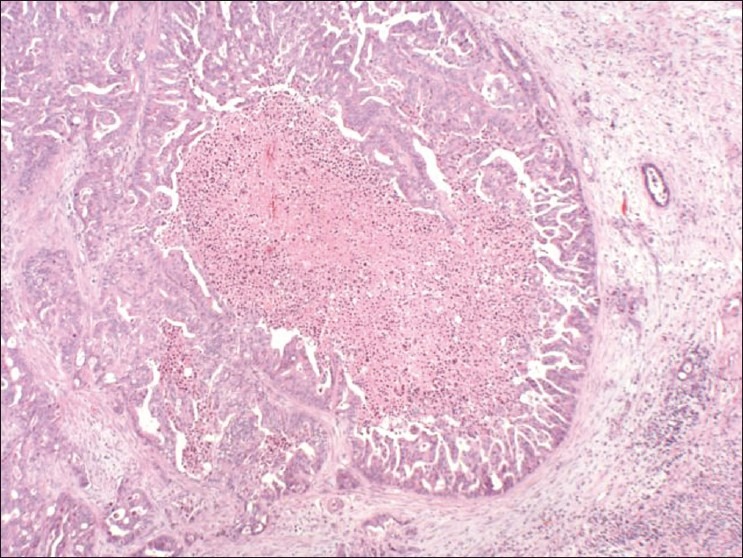 A colonoscopy was performed that revealed a 15 × 20 cm mass in the rectosigmoid colon which was biopsied. Pathology of the specimen confirmed the diagnosis of a moderately differentiated invasive colonic carcinoma. His laboratory values were as follows: Total bilirubin, 3.9 mg/dl; direct bilirubin, 1.9 mg/dl; alkaline phosphatase, 579 IU/l; AST, 248 IU/l; ALT, 19 IU/l; T protein, 6.3 g/dl; and albumin, 2.3 mg/dl. He was negative for K-Ras mutation.

Treatment was initiated with radiation to the bone metastasis with 2 to 2.5 Gy per fraction for the duration of four weeks. Additionally, he was started chemotherapy of folinic acid (leucovorin), fluorouracil (5-FU), and oxaliplatin (Folfox). He has completed three cycles of Folfox and has an excellent response to this treatment. Inguinal nodes have almost disappeared and CT follow-up scan reveals overall response.

Metastatic spread of colon cancer is quite predictable, initially through lymphatic vessels followed by hematogenous route. The most common sites for colorectal cancer metastasis are regional lymph nodes and liver. Other common sites are lung, peritoneum, and ovaries. Rare sites for metastasis are central nervous system (CNS), bone, kidney, testis, uterus, and oral cavity. However, hilar lymph nodes, skin, muscles, and adrenal gland are very rare sites, and metastases to these sites are a feature of end-stage widespread disease.[1–4] Occasional case reports of metastasis to other organs like pancreas, maxillary sinus, thyroid, knee synovium, larynx, calf, and thigh have been described. Unusual spread to axillary nodes, retroperitoneum, heart, subcutaneous tissue, cerebrum, chin, and bladder has also been reported.[1,5–10] There have been case reports describing isolated colon cancer metastasis to spleen, adrenal glands, and cutaneous tissue.[11–13]

The lymphatic drainage from the entire colon and proximal two-third of the rectum is into para-aortic lymph nodes, which then drain into the cisterna chyli. It is very uncommon for colon cancers to metastasize to groin nodes, as arterial drainage also does not run toward the external iliac system, and therefore, anatomically, they are not likely to spread to the superficial and deep inguinal lymph nodes.[14]

This case emphasizes the fact that colorectal cancer metastasizes to unusual sites and should be considered as differential diagnosis for adenocarcinoma of unknown primary. A history of surgery in past increase chances of metastasis to unusual sites due to postsurgical vascular formations.