Isolated primary esophageal lymphoma, defined as a lymphoma developing in the esophageal wall, is a distinctly rare presentation and accounts for <0>

© 2018. Indian Society of Medical and Paediatric Oncology. This is an open access article published by Thieme under the terms of the Creative Commons Attribution-NonDerivative-NonCommercial-License, permitting copying and reproduction so long as the original work is given appropriate credit. Contents may not be used for commercial purposes, or adapted, remixed, transformed or built upon. (https://creativecommons.org/licenses/by-nc-nd/4.0/.)

Isolated primary esophageal lymphoma, defined as a lymphoma developing in the esophageal wall, is a distinctly rare presentation and accounts for <1>

Non-Hodgkin's lymphoma (NHL) is most commonly a disease primarily involving lymph nodes; however, it has a well-known tendency to involve extranodal organs as its primary site. The gastrointestinal (GI) tract is the most common extranodal site of NHL, accounting for 5%–20% of all cases,[1] with the stomach affected in approximately 50%, the small bowel or ileocecal valve in approximately 33%, and the large bowel in approximately 10%. Esophageal lymphoma accounts for <1 href="https://www.thieme-connect.com/products/ejournals/html/10.4103/ijmpo.ijmpo_131_17#JR_2" xss=removed>2] In a study of 79 cases of isolated lymphomas of the GI tract in HIV-seronegative patients, sites of involvement were the stomach (55%), small intestine (31%), large intestine (11%), and esophagus (1%). Lymphomas account for <1 href="https://www.thieme-connect.com/products/ejournals/html/10.4103/ijmpo.ijmpo_131_17#JR_3" xss=removed>3] We report a case of histopathologically confirmed primary esophageal NHL of diffuse large B-cell type (DLBCL), describe its clinicoradiological features, and review the literature.

A 60-year-old man presented to us with recent onset progressive dysphagia for solids over the past 6 months. There was no history suggestive of gastroesophageal reflux or esophagitis before initiation of his present symptoms. His physical examination was normal without enlarged lymph nodes or palpable hepatosplenomegaly. Routine hematological and biochemical investigations were normal. Esophagogastroduodenoscopy showed a circumferential ulceroproliferative friable tumor from 30 to 35 cm with luminal narrowing. The remaining part of the esophagus, stomach, and duodenum were normal. The biopsy showed malignant round cells arranged in a diffuse pattern, suggestive of a NHL [Figure 1]a and [Figure 1]b. This was further confirmed by immunohistochemistry which showed diffuse positivity of tumor cells for leukocyte common antigen [Figure 1]c and CD20 [Figure 1]d and negativity for CD3 antigen. Mib-1/Ki-67 (proliferation marker) labeling index highlighted 98% tumor cell nuclei. Cytokeratin, epithelial membrane antigen, and CD138 were negative. Positron emission tomography (PET) scan [Figure 2]a and [Figure 2]b revealed 18-F fluorodeoxyglucose-avid circumferential wall thickening of the mid and lower third of the esophagus for a segment of 10 cm with hypermetabolic pretracheal, precarinal, and bilateral hilar lymph nodes. A bone marrow biopsy was done which did not show involvement by NHL. Based on a final diagnosis of isolated esophageal NHL of DLBCL type, and the multidisciplinary tumor board decision, we treated the patient with chemoradiation with six cycles of chemotherapy, including cyclophosphamide, etoposide, vincristine, and prednisolone, along with involved field radiotherapy) in view of the bulky primary disease. Posttreatment response assessment PET [Figure 2]c and [Figure 2]d revealed complete metabolic and morphological response of the primary and aortopulmonary lymph nodes. Endoscopic mapping after completion of treatment showed only posttreatment changes in the form of mucosal tags with scarring and pseudodiverticula. The patient is symptom and disease free on a 3-year follow-up. 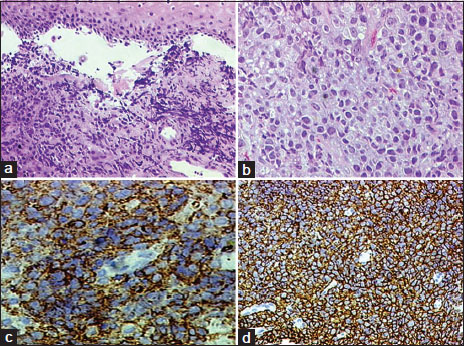 Epithelial tumors, namely squamous cell carcinoma and adenocarcinoma, are the most common types of esophageal cancer. Nonepithelial malignancies comprise only about 0.5% of all primary esophageal neoplasms. Primary lymphoma of the GI tract accounts for about 5%–20% of all cases of lymphoma. Isolated NHL of the esophagus is an extremely uncommon occurrence, accounting for <1 href="https://www.thieme-connect.com/products/ejournals/html/10.4103/ijmpo.ijmpo_131_17#JR_4" xss=removed>4] Furthermore, isolated primary lymphoma of the esophagus without an extraesophageal location is extremely rare and only 20 such cases have been reported in literature to date.[5],[6]

The etiology of the disease is unknown, with the role of Epstein–Barr virus being controversial. It has been noticed that it is most common in immune compromised patients, with HIV infection as a probable risk factor. Dysphagia is the most common symptom at presentation with less common symptoms being odynophagia, fever, and weight loss. The age at presentation of the disease is highly variable. Endoscopic and radiological findings of esophageal lymphoma are nonspecific and nondiagnostic. The diverse spectrum of endoscopic/radiological patterns that have been described for esophageal lymphoma include stricture, ulcerated mass, multiple submucosal nodules, varicoid pattern, achalasia-like pattern, progressive aneurysmal dilatation, and tracheoesophageal fistula formation. Computed tomography (CT) scan is valuable for the evaluation of the extraluminal component of an esophageal mass, its mediastinal extension, fistula formation, and status of the lymph nodes; therefore, it has a role in disease staging, assisting in stratification of various available treatments, evaluating treatment responses, monitoring patient progress, as well as detection of any relapses. PET-CT scanning has emerged as an indispensable tool in the staging and follow-up of patients with extranodal involvement in lymphoma. PET-CT has also significantly increased the detection of indolent lesions that were undetected by conventional cross-sectional imaging.[7]

© 2018. Indian Society of Medical and Paediatric Oncology. This is an open access article published by Thieme under the terms of the Creative Commons Attribution-NonDerivative-NonCommercial-License, permitting copying and reproduction so long as the original work is given appropriate credit. Contents may not be used for commercial purposes, or adapted, remixed, transformed or built upon. (https://creativecommons.org/licenses/by-nc-nd/4.0/.)