Maintenance pemetrexed is a standard treatment option for selected non squamous nonsmall cell lung carcinoma patients having a response to platin based doublet. We conducted a clinical audit of such selected patients and report the outcome among the Indian population.

To evaluate the outcomes with maintenance pemetrexed in the patients with locally advanced and metastatic adenocarcinoma lung.

Data of patients with locally advanced and metastatic adenocarcinoma lung were retrieved from prospectively maintained lung cancer database registered between June 2011 and March 2014. The patients who achieved partial response (n = 87) or stable disease (n = 101) after 6 cycles of pemetrexed platin based doublet and received the maintenance pemetrexed were selected for final analysis (n = 188). Kaplan–Meir survival analysis was used for PFS and OS. Log rank test was used to evaluate the factors affecting the outcome.

Lung cancer is the leading cause of death from cancer with an estimated 1.8 million new case per year. In India, approximately 63,000 new lung cancer cases are reported every year.[1] More than 85% of which are nonsmall cell lung carcinoma (NSCLC) and 40% of them present with either malignant effusion or metastatic disease.[1,2] Therapeutic options include cytotoxic chemotherapy and targeted therapy intended to prolong survival, control disease related symptoms and improve the quality of life (QOL).[3] Despite the significant advances in the treatment of advanced NSCLC, overall prognosis remains poor.[3,4] Recently, maintenance therapy has been evaluated and accepted as a standard treatment option for selected patients with disease control after the induction chemotherapy and good performance status. We conducted the clinical audit of our prospectively maintained lung cancer database to evaluate the outcome of the patients who received maintenance pemetrexed and, hence present first data from the Indian subcontinent.

We retrieved the data of patients with locally advanced and metastatic NSCLC from our prospectively maintained lung cancer database in our institute registered between June 2011 and March 2014. For this study, we selected the patients with non squamous NSCLC histology who have received the induction pemetrexed platinum doublet and subsequently received maintenance pemetrexed after achieving disease control. All patients having cytological or histological diagnosis of locally advanced and metastatic non squamous NSCLC (stage IIIB and stage IV), no previous systemic therapy, age more than 18 years, one or more evaluable lesion as per Response Evaluation in Solid Tumor (RECIST, version 1.1) and an adequate organ function were included for analysis. This study was approved by the Institutional Ethics Committee.

During the induction phase, patients were treated with intravenous pemetrexed 500 mg/m2 and intravenous cisplatin 75 mg/m2 or carboplatin (area under the curve = 5) on day 1 of 21 days cycle for 6 cycles. This phase is followed by a maintenance phase of maintenance pemetrexed 500 mg/m2 every 3 weeks in the patients who have achieved the disease control (complete or partial response or stable disease) after the induction chemotherapy. Maintenance pemetrexed was delivered until the disease progression, unacceptable adverse effects or decision of patient/physician to stop further therapy. During both phases, all the patients received folic acid, Vitamin B12, and prophylactic dexamethasone as per the standard recommendation with pemetrexed based therapy. Response evaluation was done after every 3 cycles of chemotherapy with contrast enhanced computed tomography scan during the induction phase and continued during the maintenance phase. Follow-up was taken from the case records, electronic medical records, and telephonic conversation with a patient or their relatives.

Between June 2011 and March 2014, 384 patients were diagnosed with stage IIIB and stage IV non squamous NSCLC histology and received induction pemetrexed platin doublet as per our database. After the careful scrutiny, 52 patients were excluded due to the erroneous entry in a database such as wrong histology, previous chemotherapy, Gefitinib maintenance or upfront, no maintenance, wrong case file numbers, etc., [Figure 1]. Out of remaining 332 patients, 66 patients (20%) had disease progression after 3 cycles while 78 (23%) had disease progression after 3 cycles of induction chemotherapy. Remaining 188 (57%) who received maintenance pemetrexed were chosen for the final analysis [Table 1]. 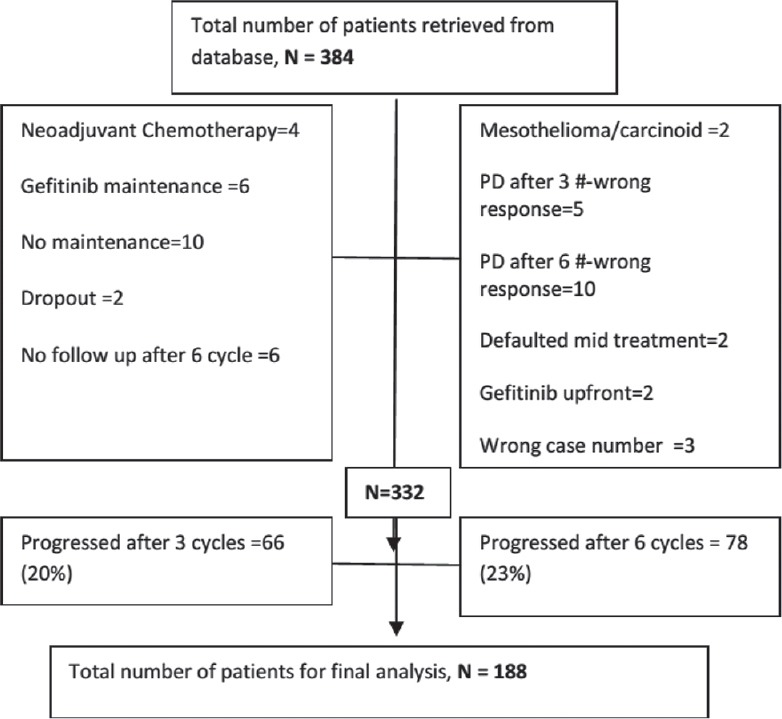 |  Fig. 1 CONSORT diagram representing the schema for the patients selected for final analysis 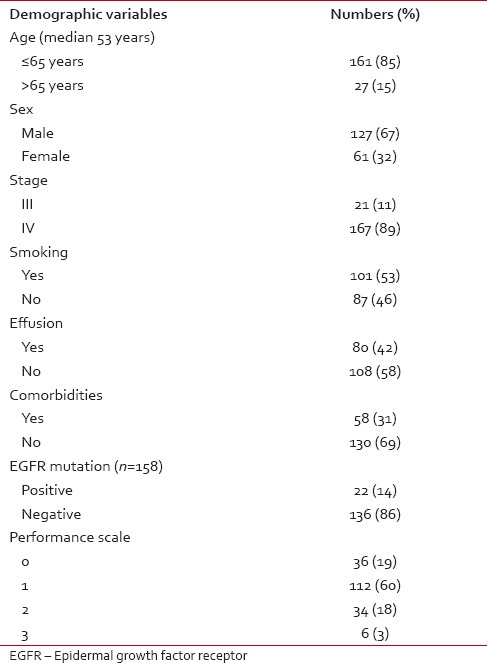 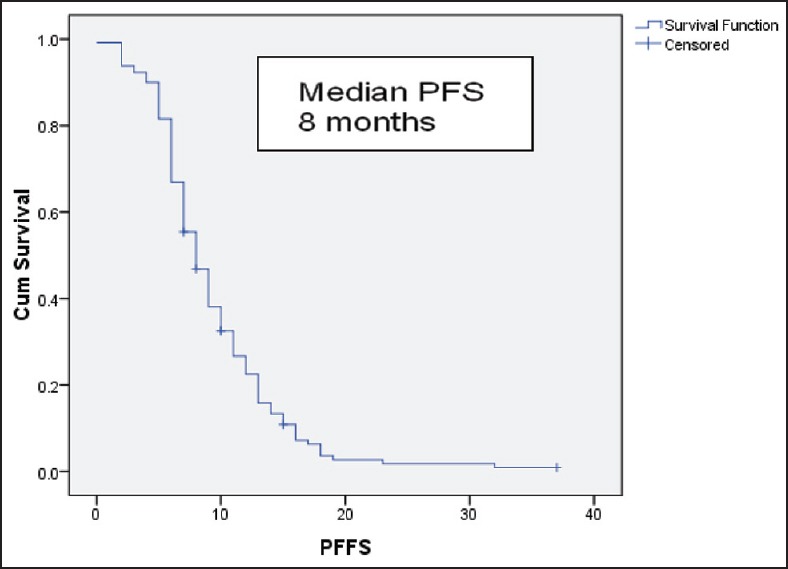 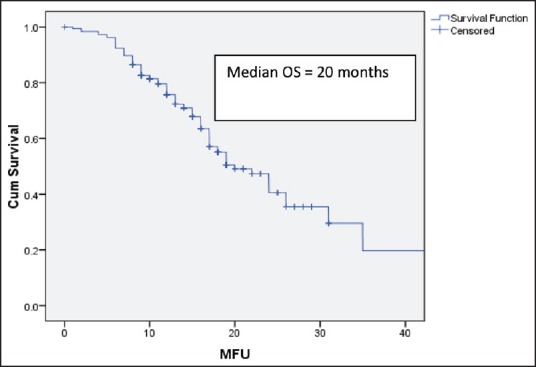 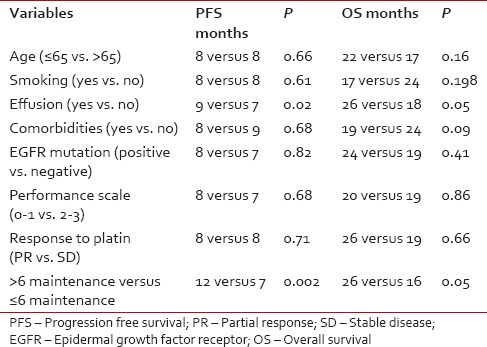 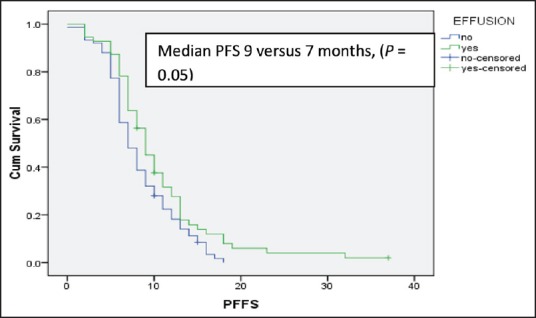 |  Fig. 4 Median progression free survival for the patients receiving maintenance pemetrexed with or without the baseline pleural effusion

Outcomes of locally advanced and metastatic lung carcinoma have reached a plateau with the treatment of induction chemotherapy. Maintenance therapy in the patients with disease control after the induction chemotherapy has recently shown to improve the outcomes.[5,6,7,8] Maintenance therapy when given in the patients with good performance status prevents the worsening of performance status and prolongs the time to progression such that more patients remain eligible for second line therapy at the disease progression. Use of maintenance therapy in selected patients has been shown to prolong the time to worsening of symptoms such as pain, hemoptysis, and reduce analgesic use, hence improving QOL.[9,10]

Median follow-up of our study is 14 months. More than 51% of patients went on to receive more than 6 cycles of maintenance pemetrexed which is superior to that reported by Paramount study (23%) and similar to that reported in JMEN trial (48%).[5,6] Patients who received more than 6 cycles of maintenance pemetrexed had significantly better outcomes. Similarly, patients having baseline pleural effusion had significantly better progression free and OS. None of the previously mentioned studies has evaluated or reported benefit in therapy in the patient with third space collection. The precise reason for such benefit could not be ascertained, however, the immune-modulator effect of maintenance pemetrexed in the patients with effusion cannot be ruled out.[11] Further studies are required to explore this hypothesis.

After progression from maintenance pemetrexed, 54% went on to receive the second line therapy which is higher compared to that reported by JMEN trial and similar to that in the paramount study. Single agent docetaxel (48%) was the most common regime used, followed by erlotinib and gefitinib. Only 14% of our patients had EGFR mutation positive which is much less compared to the prevalence of EGFR mutation reported in the Indian population.[12,13] This is probably because a considerable number of patients who initially waited for their EGFR mutation status before starting the chemotherapy, first chose to receive the first line tyrosine kinase inhibitor if they were diagnosed with EGFR mutation positive NSCLC. The benefit of pemetrexed maintenance was seen irrespective of EGFR mutation status.

Eleven out of 188 patients (6%) discontinued maintenance pemetrexed, out of which, 4 patients developed renal toxicity while remaining 7 patients had social and financial constraints. Detailed toxicity of maintenance pemetrexed could not be assessed due to the paucity of meticulous record keeping. Being retrospective study, we do not rule out any selection bias which might have inflated the overall outcomes as only patients entered in our database were analyzed which might not have included all the patients with locally advanced and metastatic NSCLC cases treated or referred to our institute.

|  Fig. 1 CONSORT diagram representing the schema for the patients selected for final analysis

|  Fig. 4 Median progression free survival for the patients receiving maintenance pemetrexed with or without the baseline pleural effusion