Malignant lymphoma in Eastern India: A retrospective analysis of 455 cases according to World Health Organization classification

Background: Malignant lymphoma (ML) is one of the most common cancers and is most prevalent in developed countries. The distribution of different subtypes of ML varies in the different geographical locations according to World Health Organization (WHO) Classification. Aims and Objectives : The study was aimed to analyze the different patterns of ML in Eastern India and to compare it with other geographical locations. Materials and Methods: Four hundred and fifty five patients of two large hospitals in Eastern India were included over a period of four years and were categorized according to WHO classification, using the morphology and immunohistochemistry. Results: There were 347 (76.3%) non Hodgkin lymphomas (NHL), and 108 (23.7%) Hodgkin lymphomas (HL). Diffuse large B-cell lymphoma was the most common of the NHL type (35.2%) followed by the follicular lymphoma (19.3%). B-cell lymphoblastic lymphoma was the least common type of NHL (1.4%). Mixed cellularity (33.3%) and nodular sclerosis (26.9%) were the two most common type of HL. Childhood lymphoma comprised of 12.5%of all ML. T-cell NHL and HL were the common lymphomas in this age group. Conclusion: Incidence of follicular lymphoma is lower compared to western studies and mixed cellularity is the most common subtype of HL unlike nodular sclerosis subtype in Western world. Burkitt′s type NHL though is the most common subtype of childhood ML in many studies. However, in our study, T-cell NHL is the most common type of childhood ML.

Malignant lymphoma (ML) is one of the most common cancers and is most prevalent in developed countries. The distribution of different subtypes of ML varies in the different geographical locations according to World Health Organization (WHO) Classification.

The study was aimed to analyze the different patterns of ML in Eastern India and to compare it with other geographical locations.

Four hundred and fifty five patients of two large hospitals in Eastern India were included over a period of four years and were categorized according to WHO classification, using the morphology and immunohistochemistry.

The World Health Organization (WHO) classification of malignant lymphoma (ML) has become popular since its introduction in 2001 and has been applied to the classification of ML in different countries around the world.[1] Different studies from America, Europe, Jordan, Iran, Japan, China, India, Iraq have revealed that the relative proportion of various ML according to WHO classification differ with geographical regions.[2,3,4,5]

Only a few studies of ML are undertaken in India so far.[6,7] To the best of our knowledge, this is the first study from Eastern India. The present study was undertaken to subtype the ML in this part of the world according to WHO classification and to compare it with other studies to find out geographical variation of ML.[8,9]

In the present study, 455 cases of malignant lymphomas, which included various subtypes of non-Hodgkin lymphoma (NHL) and Hodgkin lymphoma (HL); collected from two large hospitals over a period of four years (2008 to 2011). Of these two hospitals, one is a Tertiary Care Cancer Hospital of Eastern India and another is the medical college and hospital. Additional clinical data including, age, gender, and site of sampling were recorded.

Extranodal NHL distribution according to the primary site 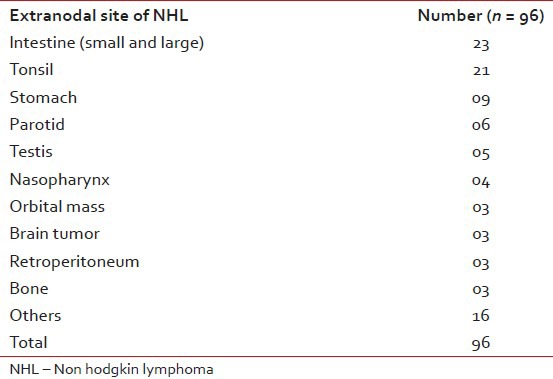 Among the 29 cases of nodular sclerosis 27 cases were Grade 1 and two cases were Grade 2. There were 11 cases of classic HL, which could not be subtyped due to small tissue specimen, and they were classified into classic NOS type.

Among the HL trepine biopsies were available in 43 cases out of total 108 cases and marrow involvement was detected in 4 cases (9.3%) [Table 2].

In India, the first population based cancer registry was established in Mumbai (Bombay) by the Indian Cancer Society in 1964. Other urban registries available are Delhi, Chennai, Bhopal and Bangalore under the network of National Cancer Registry Program (NCRP) of Indian Council of Medical Research.[14] However, no such urban cancer registry is available from Eastern India.

FL was the second most common subtype of NHL (19.3%) in our study, which is comparable in other Indian study.[22] A higher proportion is noted in Western studies (28-32%). Lower incidence of FL (4-8%) was reported from Saudi Arabia, Egypt, UAE, North Jordan and Pakistan.[2,18] Naresh et al. opined that the low rates of FL in developing countries might be due to many DLBCL progressed from previously undiagnosed FL and that unique environmental or genetic factors may have contributed to such progression.[22]

Bone Marrow involvement was noted in 30.3% of NHL cases and 9.3% of HL cases. Bone marrow involvement in NHL varies from 20% to 40% in different Western studies, which is similar to our studies.[1,6,23] In, different Indian studies bone marrow involvement in HL is 8.33-9.68% which is almost similar to our study.[6,7] Extranodal lymphomas (ENL) are common and accounted for 27.7% of ML cases. This figure is close to the incidence in USA (26%) and slightly lower than Jordan (30.5%), UAE (29%) and Bahrain (41%).[11] DLBCL was the most common subtype of ENL and gastrointestinal tract is the most common site in a study in Kuwait, similar to our findings.[24] However, higher incidence of ENL (44.9%) was seen in Taiwan.[25] While NHL and HL have long been regarded as distinct entities, recent study showed a closer association of these two entities. The analysis of cases in which both diseases are present in the same anatomic site (composite lymphomas), or in separate sites (sequential or simultaneous NHL and HL), indicates that this phenomenon occurs more frequently than would be expected by chance alone.[26,27]

The present study from Eastern Indian shows higher number of NHL cases (76.3%) then HL cases (23.7%) and male–female ratio is 3.1:1. A lower percentage of follicular lymphoma is seen compared to Western studies and Grade 3 is the most common subtype of follicular lymphoma. Among the extranodal NHL, tonsil is most frequently involved site and is second most common site of extranodal NHL in our study. Mixed cellularity type of HL is the most common subtype like in other Asian, and Indian studies; however, unlike western studies where nodular sclerosis is the commonest type. T-cell NHL is the most common type of childhood NHL unlike Burkitt's lymphoma in other studies. Highest bone marrow involvement is seen in mantle cell lymphoma among NHLs and lymphocyte depleted variant among HLs and ALCL among childhood lymphomas.