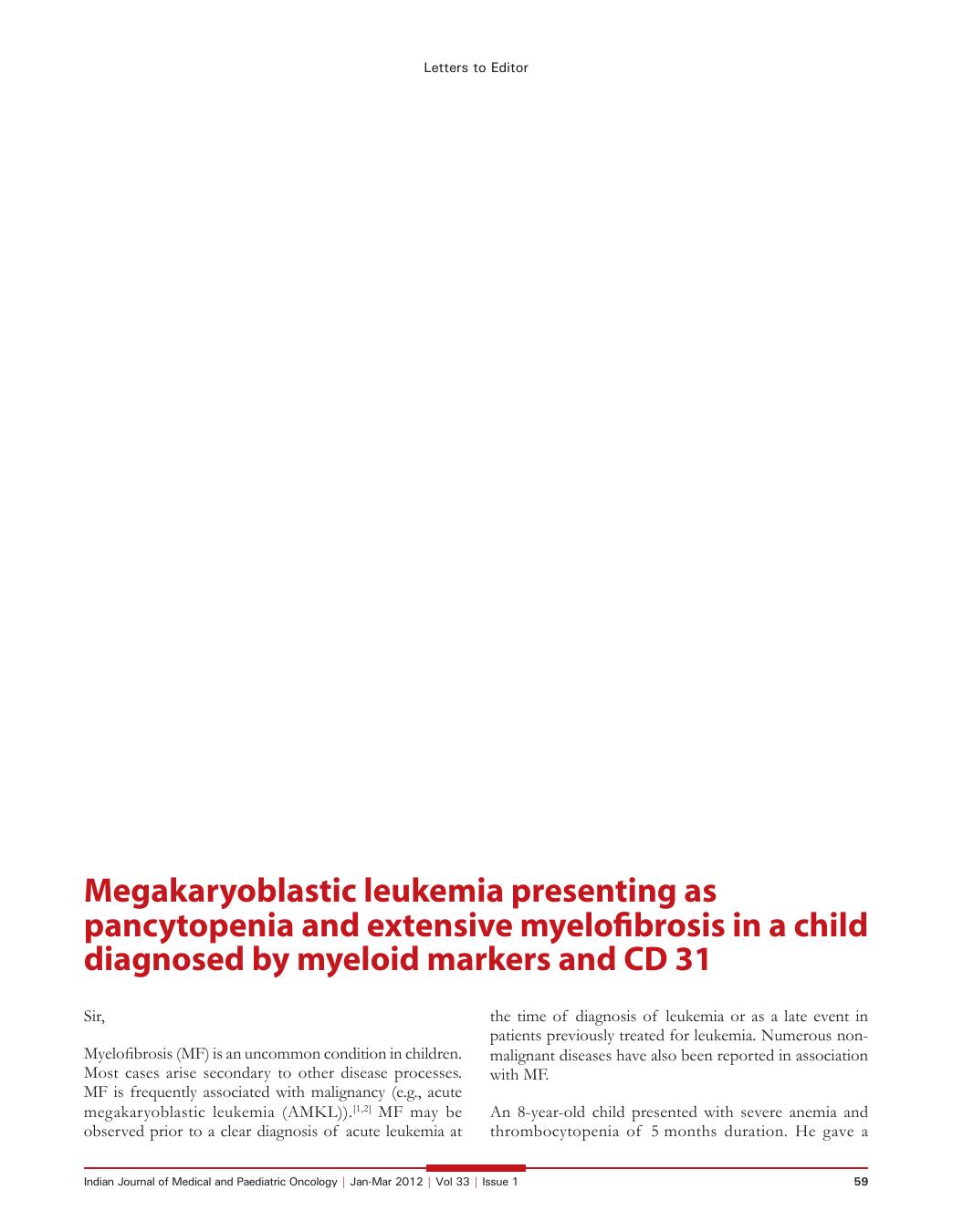 Myelofibrosis (MF) is an uncommon condition in children. Most cases arise secondary to other disease processes. MF is frequently associated with malignancy (e.g., acute megakaryoblastic leukemia (AMKL)).[1,2] MF may be observed prior to a clear diagnosis of acute leukemia at the time of diagnosis of leukemia or as a late event in patients previously treated for leukemia. Numerous non-malignant diseases have also been reported in association with MF.

An 8-year-old child presented with severe anemia and thrombocytopenia of 5 months duration. He gave a history of fever off and on. On examination, the patient was severely anemic and had ecchymosis patches. He had slight hepatosplenomegaly. He was extensively investigated elsewhere. His antinuclear antigen test, antineutrophil cytoplasmic antigen tests and antiviral tests were negative. He had raised C-reactive protein and serum lactic dehydrogenase. He had no Down's syndrome. Liver function tests and renal function tests were normal. He was treated with steroids and repeated red blood cell and platelet transfusions before reporting here. His total white blood cell count was 3000/ cmm and platelet count was 38000/ cmm. Marrow aspiration was a dry tap and showed occasional blasts. The marrow biopsy showed extensive MF [Figure 1a] with marked increase in reticulin fibers [Figure 1b]. Scattered blasts and few mature myeloid series cells could be made out [Figure 2]. Some of the blasts had an elongated appearance due to extensive fibrosis. The blasts were large and showed lobulated nuclei with cytoplasmic blebs [Figure 3b]. An immunohistochemical study was carried out for the exact histogenesis of these atypical cells. These cells showed positivity for myeloperoxidase (MPO) [Figure 3c], CD 43 [Figure 3d] and CD 31 [Figure 3a]. Many elongated cells also showed positivity for MPO, CD 43 and CD 31, indicating the megakaryocytic nature of these cells. Immunohistochemistry reactions for leucocyte common antigen, CD 20, CD 3, CD 15, CD 68, CD 34, C-Kit, Tdt and Factor VIII were negative. A diagnosis of acute megakaryocytic leukemia was made and chemotherapy treatment was started. 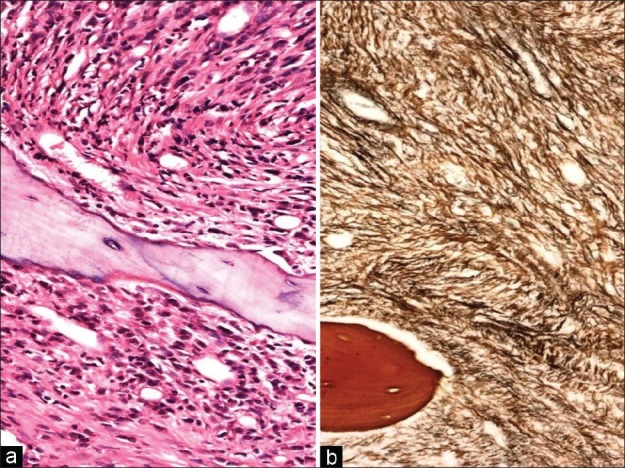 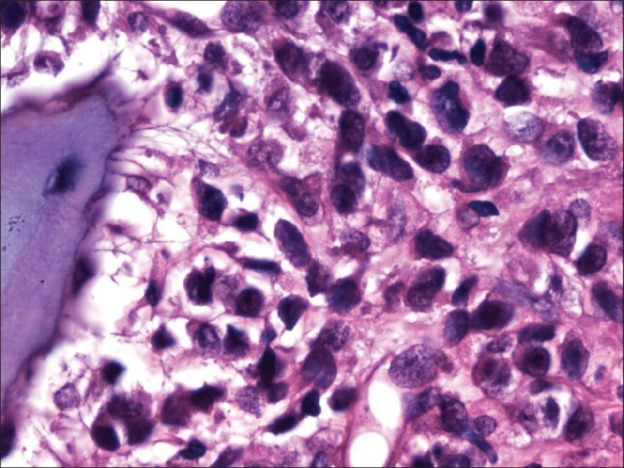 | Fig. 2 Hematoxylin and eosin, ×100. Megakaryoblasts in the bone marrow section 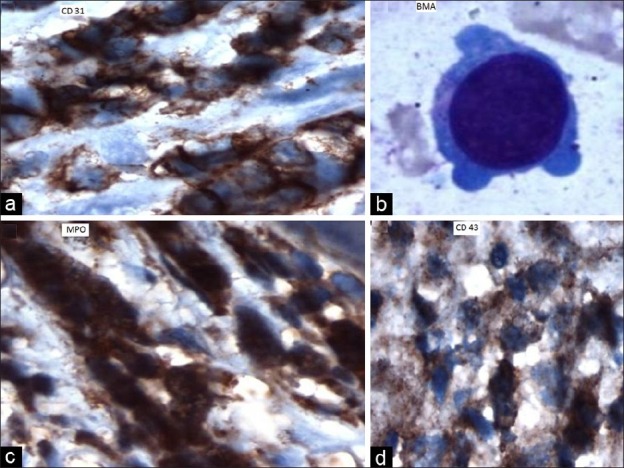 Acute megakaryocytic leukemia is a rare subtype of AML, evolving from primitive megakaryoblasts. MF may be observed prior to a clear diagnosis of acute leukemia, at the time of diagnosis of leukemia or as a late event in patients previously treated for leukemia. Numerous non-malignant diseases have also been reported in association with MF. Clinically, AMKL and acute myelofibrosis are indistinguishable and careful examination of the morphology of marrow blasts together with immunophenotyping for expression of platelet antibody are required. An immunohistochemical analysis performed on bone marrow biopsy specimens is often of limited usefulness in the workup of AMKL. Currently, the only commercially available antibodies for megakaryocyte-associated markers for immunohistochemical applications on paraffin-embedded tissue samples are directed against factor VIII and CD61 (platelet glycoprotein GPIIIa). Unfortunately, pediatric AMKLs are frequently negative for factor VIII, and immunohistochemical detection of CD61 is often less sensitive than flow cytometry.[3] However, when flow cytometry is not possible due to a dry tap, other myeloid markers like MPO, CD 43 and CD 31[4] can help in diagnosing AMKL to start proper treatment.

| Fig. 2 Hematoxylin and eosin, ×100. Megakaryoblasts in the bone marrow section