A man aged 32 years presented with metastatic adenocarcinomatous deposits, 12 years after his initial diagnosis and treatment of immature teratoma of the testis. He was treated for his metastasis with local radiotherapy, failing which he underwent excision of the tumor and palliative chemotherapy. This case is presented for its rarity of occurrence, unique presenting features and difficulty in management.

A man aged 32 years presented with metastatic adenocarcinomatous deposits, 12 years after his initial diagnosis and treatment of immature teratoma of the testis. He was treated for his metastasis with local radiotherapy, failing which he underwent excision of the tumor and palliative chemotherapy. This case is presented for its rarity of occurrence, unique presenting features and difficulty in management.

Although germ cell tumors (GCTs) account for only 2% of all human malignancies, they are the most common tumors diagnosed in men aged 15-35 years. Being chemoresponsive, more than 90% of newly diagnosed patients are cured with standard chemotherapy.

Transformation of the teratomatous component in a GCT to a histology that is identical to a somatic malignancy is a rare occurrence seen in 3–6% patients with GCT with teratomatous differentiation. Examples of transformed cell types include rhabdomyosarcoma (RMS), primitive neuroectodermal tumor (PNET), enteric adenocarcinoma, and leukemia. This transformation is more commonly seen in mediastinal nonseminomatous germ cell tumors (NSGCT) than from gonadal or retroperitoneal primary tumors. The identification of i(12p) or excess 12p chromosome copy number in these tumors establishes the clonal-origin of these malignant cells.

Surgical resection has been the mainstay of therapy when the transformation is localized to a single site. Chemotherapy has a role in selected cases of metastatic transformation and treatment is determined by the cell type.

This man first presented to us at the age of 18 years with complaints of a painless left testicular swelling and a paramedian abdominal mass extending from the left side of umbilicus to left iliac fossa. Investigations revealed alphafetoprotein (AFP) 455 ng/ml and beta human chorionic gonadotropin (B-HCG) 575 mIU/ml. A high inguinal orchidectomy specimen showed features of embryonic carcinoma with immature teratoma [Figure 1]. He received three cycles of chemotherapy with Etoposide, Cisplatin and Ifosphamide. Chemotherapy was followed by retroperitoneal lymph nodal dissection which showed pathological features of teratocarcinoma. Postoperatively, abdominal sonogram showed no evidence of residual disease. He received one more cycle of chemotherapy, which he tolerated poorly. Tumor markers became undetectable. Hence, further chemotherapy was stopped. He was regularly observed for a period of 5 years, after which he was lost to follow-up. 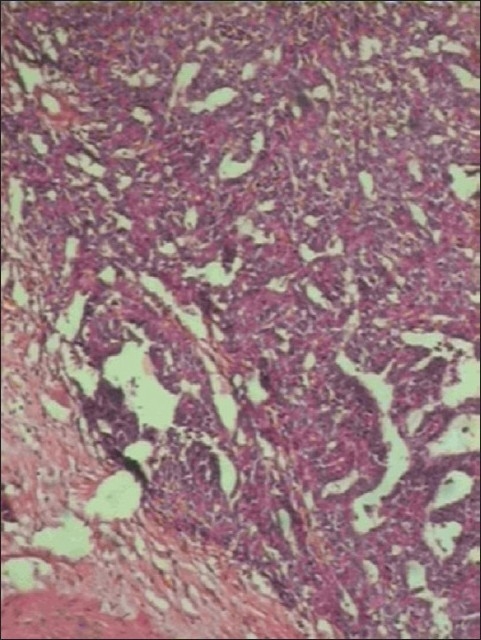 He presented to us, 12 years after his first presentation, at the age of 30 years, with left-sided chest pain of 2 months duration. He was evaluated with a bone scan which showed diffuse, but avid, uptake in left 10th rib posteriorly, and in adjacent 10th dorsal vertebrae, suspicious of metastasis. Tumor markers were within normal limits. Magnetic resonance imaging (MRI) of the dorso-lumbar (DL) spine [Figures ​[Figures22 and ​and3]3] showed metastatic involvement of the D10 vertebral body with secondary deposits in left paravertebral region at D10 level extending into D10-D11 spinal canal and causing erosion of left 10th rib. Computed tomography (CT) guided biopsy [Figure 4] from the D10 lesion showed adenocarcinoma – metastasis in a known case of NSGCT of testis. He received local radiation therapy (RT) to the dorsal spine at 40Gy in 16 fractions over a 10 day period. 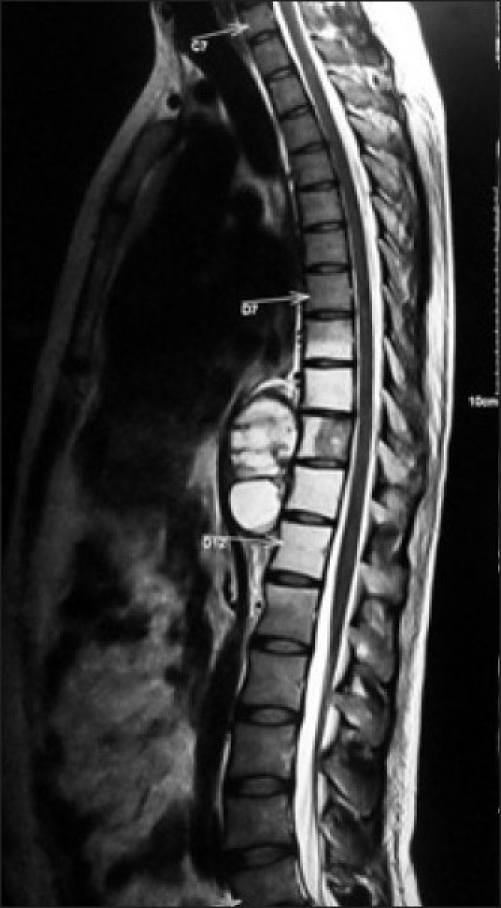 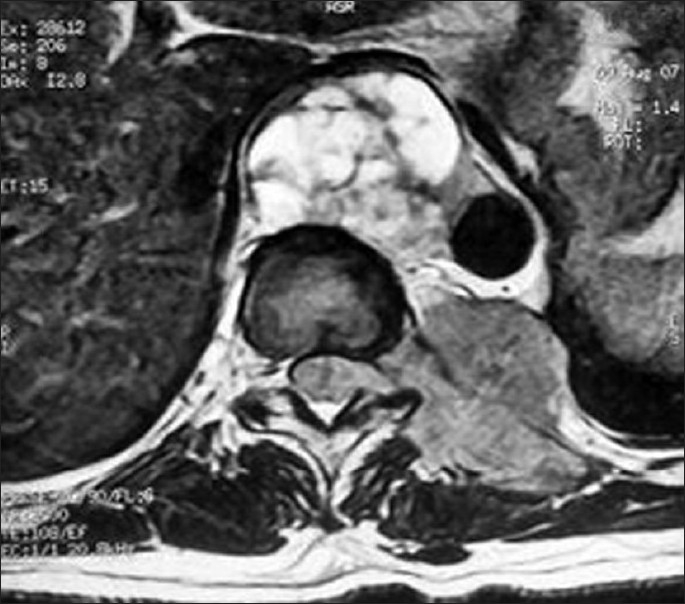 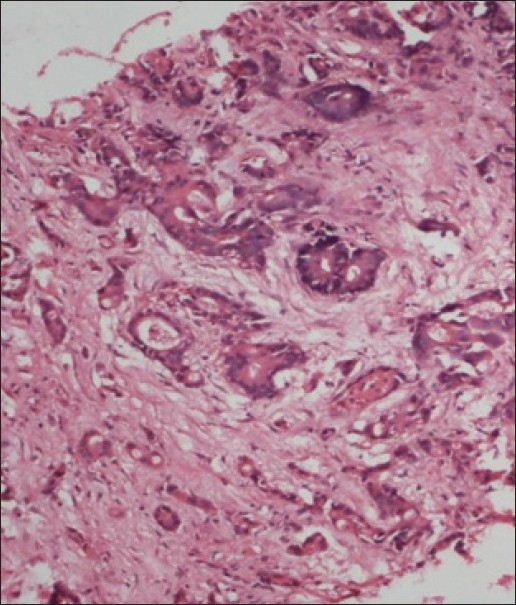 Three months after RT, on revaluation, an MRI DL spine showed a persistent paraspinal mass with some regression of the intraspinal component. Positron emission tomography (PET)-CT scan showed a metabolically active left 10th rib and necrotic paravertebral nodes. As, he was asymptomatic, no further intervention was undertaken.

A year later, he returned with recurrent symptoms and tumor progression, for which he received another course of local RT.

One year after his second course of RT, he presented with reappearance of radicular pain along the left lower costal margin, hesitancy, weakness and numbness of both lower limbs. On re-evaluation, CT scan showed increase in the extent of involvement of left 10th rib and paravertebral mass. He underwent an immediate decompression of the tumor with D10 to D11 laminectomy, excision of the extradural mass and en bloc excision of Lt 9th/10th/11th ribs.

Postoperatively, the patient was started on palliative chemotherapy with Paclitaxel and Carboplatin. Response evaluation after four cycles showed evidence of progressive disease. He further underwent D10 corpectomy with excision of the tumor and spinal stabilization with cage reconstruction of D10 vertebra. His was changed to a 5-Flurouracil (5-FU) based chemotherapy regimen.

The earliest report of transformation to a somatic malignancy in teratomas was published by Ulbright et al.[1] in 11 male patients with GCT. The authors proposed that these malignant elements arose within teratomatous foci when cisplatin therapy “unmasks” the non-germ cell malignant elements by destroying the more chemosensitive germ cell types.

In a case series by Mozter et al.[2] 46 patients with transformed teratomas were studied. Sarcoma was the most frequent histology identified in 29 patients (63%). Adenocarcinoma and PNET were the other most common histologies.

In a study by Donadio et al.,[3] patients with transformed teratomas, from 1988 to 2002, were identified from the review of the GCT database at Memorial Sloan-Kettering Cancer Center. A total of 10 patients with measurable disease were identified. Among these patients, only two had developed adenocarcinoma as the transformed malignant histology. Amongst all transformed histologies, only patients with adenocarcinoma developed their disease 20 or more years after their initial GCT diagnosis. These two patients went on to receive 5-FU based chemotherapy which was instrumental in achieving only a partial response, and response duration of only 2 years. The presence of transformed teratomatous components at metastatic sites implied a poor prognosis, with a median survival time of only 28 months.

To the best of our knowledge, there is no case report from India of malignant transformation of teratoma after a long latent period of 12 years. Total surgical excision of the lesion is the treatment of choice for localized disease, especially for carcinoma/adenocarcinoma component as part of malignant transformation. The role of chemotherapy and radiotherapy is limited. In this case, local control could not be achieved due to the presence of an intraspinal component. The management of this patient was thus a therapeutic challenge.

Teratoma with malignant transformation is a rare occurrence. A long latent interval between the primary diagnosis and secondary metastatic presentation is consistent with adenocarcinoma.