Publication Date:23 June 2021 (online)
? 2018. Indian Society of Medical and Paediatric Oncology. This is an open access article published by Thieme under the terms of the Creative Commons Attribution-NonDerivative-NonCommercial-License, permitting copying and reproduction so long as the original work is given appropriate credit. Contents may not be used for commercial purposes, or adapted, remixed, transformed or built upon. (https://creativecommons.org/licenses/by-nc-nd/4.0/.)
Thieme Medical and Scientific Publishers Pvt. Ltd.A-12, 2nd Floor, Sector 2, Noida-201301 UP, India

Esophageal cancer is one of the most aggressive cancers with dismal outcomes despite surgery, radiotherapy, and chemotherapy.[1] In patients with advanced unresectable or metastatic disease, the prognosis is grim with an estimated median survival of 6?7 months, regardless of whether the patient is treated with single agent chemotherapy or aggressive three-drug combination chemotherapy.[2],[3],[4] Taxanes have demonstrated promising activity in patients with esophageal cancer.[4] Paclitaxel has been used in various schedules, ranging from 24 h infusion to short 1 h infusion; however, shorter infusions have similar efficacy and lesser toxicity.[5] Metronomic weekly paclitaxel in smaller studies has shown modest response in unresectable and metastatic esophageal carcinoma. We present largest patient data from tertiary cancer center regarding experience with metronomic weekly paclitaxel in patients with advanced unresectable, metastatic, or recurrent esophageal and esophagogastric carcinomas.

We retrieved data of patients prospectively collected in our esophageal cancer database of recurrent, unresectable, and metastatic esophageal carcinoma registered between September 2010 and October 2014. Only patients who had confirmed histology and subsite available, received weekly paclitaxel as palliative chemotherapy, and having at least one response evaluation done as per Response Evaluation Criteria in Solid Tumor (RECIST, version 1.1, European Organisation for Research and Treatment of Cancer (EORTC), National Cancer Institute of United States, National Cancer Institute of Canada Clinical Trialist group, revised in 2008) were selected for final analysis. This study was approved by the Institutional Ethics Committee.

All patients were evaluated at baseline including history and physical examination, laboratory parameters, upper endoscopy (if indicated), and imaging studies. Patients were treated with paclitaxel at 80 mg/m 2 as a 1 h infusion given weekly with standard premedications including antihistamines, antiemetic, H2 antagonists, and steroids. Each dose of chemotherapy was considered as one cycle. If there was no evidence of hypersensitivity in the first few cycles of chemotherapy, steroids were omitted in subsequent cycles. Complete blood count was checked weekly and patients were evaluated by a physician weekly before chemotherapy. Serum biochemistry (including fasting blood glucose, liver functions, and renal functions) and serum electrolytes were checked once a month.

Response was calculated using standard response evaluation criteria in solid tumor (RECIST version 1.1) definitions, with the measurements including the maximum esophageal thickness added to other measurable lesions. Follow-up was taken from the case records, electronic medical records, and telephonic conversation with a patient or their relatives. Progression-free survival (PFS) was calculated from the date of receiving first dose of paclitaxel chemotherapy to the date of radiological progression, symptomatic deterioration in the absence of progressive disease (PD) on scan, start of next line of therapy due to any reason (logistic reasons, financial constraints, or unacceptable toxicity), or death from any cause. Overall survival (OS) was calculated from the date of first chemotherapy to the date of death from any cause. Toxicity was graded according to common terminology criteria for adverse events (Common terminology criteria for adverse events. CTC v 4.03 (National Cancer Institute Common Terminology Criteria for Adverse Events v4.0). Imaging studies were repeated approximately every eight cycles. Statistical Package for the Social Sciences version 18 (IBM Corp. Released 2011. IBM SPSS Statistics for Windows, Version 20.0. Armonk, NY: IBM Corp.) was used for statistical analysis. For OS and PFS, Kaplan?Meier estimation curves were generated. Clinical factors and laboratory factors individually were tested with log-rank test. Those factors which prognosticated for OS were then tested in a Cox proportional Hazard method for multivariate analysis.

Between September 2010 and October 2014, we selected data of 350 patients who were registered as recurrent/metastatic esophageal carcinoma in our prospectively maintained institutional database and received at least four doses of weekly paclitaxel with at least one response evaluation available. Median age at diagnosis is 55 years with a male:female ratio of 2.4:1 [Table 1]. Nearly 58% were squamous cell carcinoma whereas 42% had adenocarcinoma histology. Lower one-third was the most common subsite (51%,) followed by mid (35%) and upper esophagus (14%). Performance status was> 2 in 25.4%. Nearly 205 (59%) had baseline metastatic disease at presentation, whereas 218 (62%) had received previous therapy such as surgery, radiotherapy, or chemotherapy for definitive or palliative purpose. Among patients who received previous chemotherapy, 50% patients were platinum pretreated and 39% had received prior 3 weekly paclitaxel. Median number of cycles of weekly paclitaxel delivered was 12 with median total duration of 3 months. About 51% of patients had improvement in dysphagia on weekly paclitaxel, with a median time to symptom improvement of 20 days. In 31% of feeding tube-dependent patients, the nasogastric tube could be removed successfully. 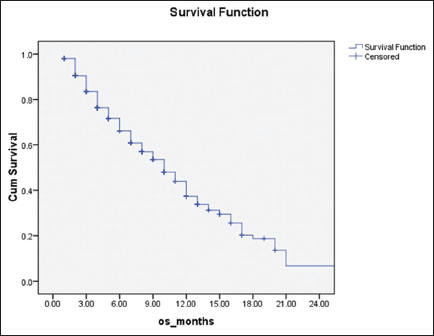 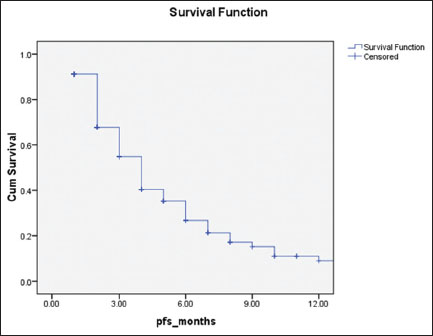 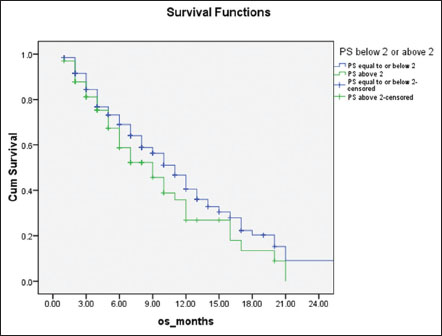 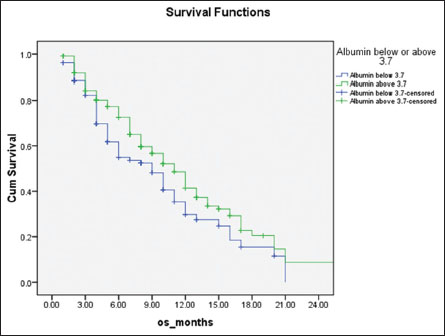