Pancreatic Adenocarcinoma with Primary Tumor Calcification and Calcified Liver Metastasis: Report of a Rare Case and Review of Literature

© 2020. Indian Society of Medical and Paediatric Oncology. This is an open access article published by Thieme under the terms of the Creative Commons Attribution-NonDerivative-NonCommercial-License, permitting copying and reproduction so long as the original work is given appropriate credit. Contents may not be used for commercial purposes, or adapted, remixed, transformed or built upon. (https://creativecommons.org/licenses/by-nc-nd/4.0/.)

A 63-year-old Indian male presented with upper abdominal discomfort for 2 months accompanied by weight loss and occasional vomiting for the same duration. There was no history of fever, altered bowel habit, hematemesis, or melena. His medical history was significant for diabetes mellitus for the last 20 years and hypothyroidism for the last 5 years, and he was on regular medications for both. He did not have any documented history of hyperparathyroidism. An ultrasound scan done elsewhere showed multiple space-occupying lesions in the liver. He was referred to us for further management.

On clinical examination, his vital signs were all normal and his Eastern Cooperative Oncology Group (ECOG) performance status was 2. Mild pallor was present. No nodes were palpable. Abdominal examination revealed mildly enlarged (two fingers below costal margin), hard liver with no tenderness. Skin examination revealed multiple tender erythematous nodules on the anterolateral aspect of both lower legs. The rest of the systemic examination was normal. At our hospital, the results of baseline investigations were as follows: hemoglobin 10.3 g/dl, total white blood cell count 10,700/mm3, and platelets 3.82 lakhs/mm3. Liver function tests revealed the following: bilirubin total 1.2 mg/dl, serum alanine aminotransferase 95 (21–72) U/L, serum aspartate aminotransferase 172 (17–59) U/L, gamma-glutamyl transferase 425 U/L (15–73 U/L), serum alkaline phosphatase 81 (38–126 U/L), albumin 2.7 g/dl, creatinine 0.72 mg/dl, urea 31 mg/dl, and calcium 9.2 g/dl (corrected 11 g/dl). Contrast-enhanced computed tomography (CECT) of the thorax and whole abdomen was done on December 11, 2018, which revealed multiple poorly defined hypoattenuating nodules in the liver with amorphous areas of calcifications [Figure 1a]. An ill-defined mass with nodular and amorphous calcification was noted in the uncinate process of the pancreas [Figure 1b]. The rest of the pancreatic parenchyma showed no calcification. There was no ductal dilatation or pancreatic parenchymal atrophy. Multiple nodes in the retroperitoneum were seen, with few showing calcifications, largest measuring 2.1 cm. 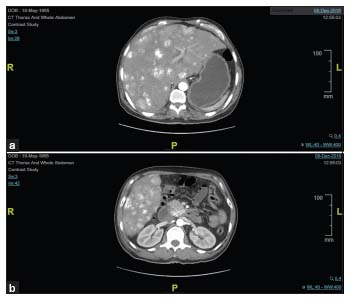 | Figure 1: (a) Calcified liver metastases along with multiple enhancing nodules distributed in the liver. (b) Calcified irregular enhancing mass in the head of the pancreas

Postcontrast image showed minimal enhancement in the liver nodules and pancreatic mass [Figure 1b]. The rest of the abdomen and thorax was unremarkable. A pancreatic primary neoplasm was considered. Serum CA 19-9 was 849 U/ml (normal limit < 27 U/ml). Ultrasound-guided biopsy from one of the liver nodules showed metastatic poorly differentiated carcinoma with areas of calcification, favoring adenocarcinoma. Immunohistochemistry showed diffuse positivity for cytokeratin (AE1/AE3) and CA 19-9, whereas it was negative for CK7, CK20, and p40. Fine-needle aspiration cytology was done from the skin nodules, which showed fat necrosis, inflammatory infiltrate composed of predominantly neutrophils, and foamy macrophages suggestive of erythema nodosum. A diagnosis of pancreatic adenocarcinoma with liver metastases was made.

He was managed for hypercalcemia with hydration and diuretics and was started on systemic chemotherapy with gemcitabine 1000 mg/m2 and nab-paclitaxel 125 mg/m2 given on days 1, 8 and 15, cycles repeated every 28 days. He was ECOG performance status 2 at presentation; therefore, mFOLFIRINOX was not offered. At the time of reporting of this case, he has completed three cycles of gemcitabine and nanoparticle albumin-bound paclitaxel and repeat CECT scan done on March 11, 2019, showed overall partial response. Interestingly, there was an increase in the density of calcification in the primary neoplasm as well as the metastatic lesions [Figure 2a and b]. His serum CA-19.9 level had decreased to 734 U/ml. His serum calcium level had decreased to 8.1 mg/dL and serum albumin level had increased to 3.3 gm/dl. At present, he is asymptomatic and doing well on chemotherapy. 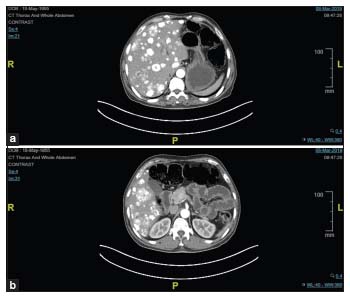 | Figure 2: (a) Increased calcification in the liver lesions. (b) Pancreatic mass showing regression in size

Calcification of pancreatic adenocarcinoma is reported when it occurs in the background of chronic calcific pancreatitis (CCP).[1] In the absence of CCP, calcification in pancreatic adenocarcinoma is very uncommon. Calcification is more commonly seen in benign pancreatic masses such as solid pseudopapillary epithelial neoplasm, serous cystadenoma, and mucinous cystic neoplasm. Malignant tumors of the pancreas that commonly show calcification are neuroendocrine tumors (NETs) and intraductal papillary mucinous neoplasm (IPMN).[2] The presence of calcification is correlated with poor prognosis and outcome.[3] NETs usually show strong enhancement on postcontrast images and malignant IPMN is associated with dilatation of main pancreatic duct; both of these findings were absent in this case. Rare primary tumors associated with calcification include acinar cell carcinoma,[4] liposarcoma, and chondrosarcoma.[5] Some case reports have described psammomatous calcification within the primary adenocarcinoma of the pancreas.[2] Another case report showed the presence of calcification in ductal adenocarcinoma after resection. In the same report, multiple kinds of bone morphogenetic protein (Types 5, 6, and 7) were also identified in the cytoplasm of carcinoma cells. Due to the rare occurrence, the clinicopathologic significance of this finding remains uncertain. Many such cases are a result of chronic pancreatitis, which is the primary cause of calcification.[6]

To our knowledge, only five cases of intratumoral calcification have been reported, but no reports of metastatic calcification have been reported in literature for poorly differentiated adenocarcinoma.[2],[5],[7],[8],[9],[10],[11],[12],[13],[14] This is, as per our search results, the first case to be reported with such a clinicoradiological picture. Historically, baseline hypercalcemia is associated with poor prognosis in other solid tumors like the lung.

In summary, this is the first reported case of metastatic poorly differentiated adenocarcinoma of the pancreas with extensive calcification of both primary and the metastatic sites, with baseline hypercalcemia. Clinicians and radiologists should not discard the possibility of a primary pancreatic adenocarcinoma in the presence of a mildly enhancing calcified primary tumor and calcified metastatic liver nodules.

© 2020. Indian Society of Medical and Paediatric Oncology. This is an open access article published by Thieme under the terms of the Creative Commons Attribution-NonDerivative-NonCommercial-License, permitting copying and reproduction so long as the original work is given appropriate credit. Contents may not be used for commercial purposes, or adapted, remixed, transformed or built upon. (https://creativecommons.org/licenses/by-nc-nd/4.0/.)

| Figure 1: (a) Calcified liver metastases along with multiple enhancing nodules distributed in the liver. (b) Calcified irregular enhancing mass in the head of the pancreas

| Figure 2: (a) Increased calcification in the liver lesions. (b) Pancreatic mass showing regression in size