Background: Glioblastoma multiforme (GBM) is the most common astrocytoma in adults and has a poor prognosis, with a median survival of about 12 months. But, it is rare in children. We report our experience on the pediatric population (20 years or younger) with GBM. Patients and Methods: Twenty-three patients with GBM who were treated at our hospital during 1990-2008 were evaluated. Results: The mean age was 15.2 years, and the majority of them (14/23) were male. All had received radiotherapy and some had also received chemotherapy. The mean survival was 16.0 months. Two cases survived more than 5 years. Age, radiation dose and performance status were significantly related to survival. Conclusion: GBM in pediatric patients were not very common in our center, and prognosis was unfavorable.

Glioblastoma multiforme (GBM) is the most common astrocytoma in adults and has a poor prognosis, with a median survival of about 12 months. But, it is rare in children. We report our experience on the pediatric population (20 years or younger) with GBM.

Twenty-three patients with GBM who were treated at our hospital during 1990–2008 were evaluated.

The mean age was 15.2 years, and the majority of them (14/23) were male. All had received radiotherapy and some had also received chemotherapy. The mean survival was 16.0 months. Two cases survived more than 5 years. Age, radiation dose and performance status were significantly related to survival.

GBM in pediatric patients were not very common in our center, and prognosis was unfavorable.

Glioblastoma multiforme (GBM), which consists of 17% of adult intracranial neoplasm, is a frightening disease.[1] No risk factor except ionizing radiation is known to be associated with GBM.[2] GBM is one of the most aggressive cancers in humans. Despite advances in surgery and adjuvant treatment, the average survival is about 1 year, which has not been improved significantly during the last three decades.[3,4] After temozolomide was introduced as an effective chemotherapy, both concurrent with radiotherapy and as an adjuvant chemotherapy, survival only improved for 2 months.[5] GBM is rare among children.[6] In this retrospective study, we describe the demography, treatment and results for our hospital pediatric (20 years or younger) GBM patients.

In this study, we describe our GBM patients and their treatment outcome for those who were 20 years old or younger and were treated in an academic tertiary referral center. All the patients had pathologic diagnosis of GBM. The patients’ demographic characteristics, disease factors (size, location, etc.), treatment (operation, radiotherapy/chemotherapy technique and dose) and outcome were obtained from the patients’ records and by phone, if needed.

Twenty-three cases with 20 years or less at the time of diagnosis were treated at our center during an 18-year period from January 1990 to December 2008. Performance status (PS) was defined according to the Eastern Cooperative Oncology Group (ECOG) scoring system.[7]

Although the aim of surgery was maximal safe resection of the tumor, most (12) cases had undergone only stereotactic biopsy. In six patients, it was due to poor PS and in the other six cases, it was due to deep-seated or eloquent location of the tumor. Most patients received postoperative radiotherapy, except those with poor PS. The patients received radiotherapy with cobalt-60 units or 9 MV X-ray photons from a linear accelerator. In these series, 10 cases who were treated before 2000 initially received 40 Gy as whole brain radiotherapy followed by 14 Gy as involved field with a 2–2.5 cm margin and, since 2000, the remaining 13 cases were treated with involved field radiotherapy with a 2–2.5–cm margin. Some cases could not complete their radiotherapy course or only received short-term palliative radiotherapy (30 Gy in 10 fractions). The patients with significant tumor-related or postsurgical complications such as severe anorexia, nausea, vomiting (due to persistent increased intracranial pressure), weight loss, dysphagia and respiratory distress (due to midbrain and/or brain stem involvement) and decreased level of consciousness could not complete their radiotherapy plan.

After curative or palliative radiotherapy, chemotherapy was considered for some patients, but those with poor PS did not receive chemotherapy. Four cases of these series were treated in the recent 5 years; however, despite the availability of temozolomide in recent years, these cases did not receive temozolomide due to lack of medical insurance coverage for this drug and low socioeconomic status.

Twenty-three cases were eligible to enter the study [Table 1]. They were between 10 and 20 years old. Their mean age was 15.2 years and the median age 16 years. Fourteen patients were male and the other nine patients were female (male/ female ratio: 1.55). Eleven cases had right-sided and 12 cases had left-sided lesions. Twelve (52%) tumors were located in the occipital lobe. Six (26%) tumors were in the temporoparietal lobe and five (22%) in the frontal lobe. 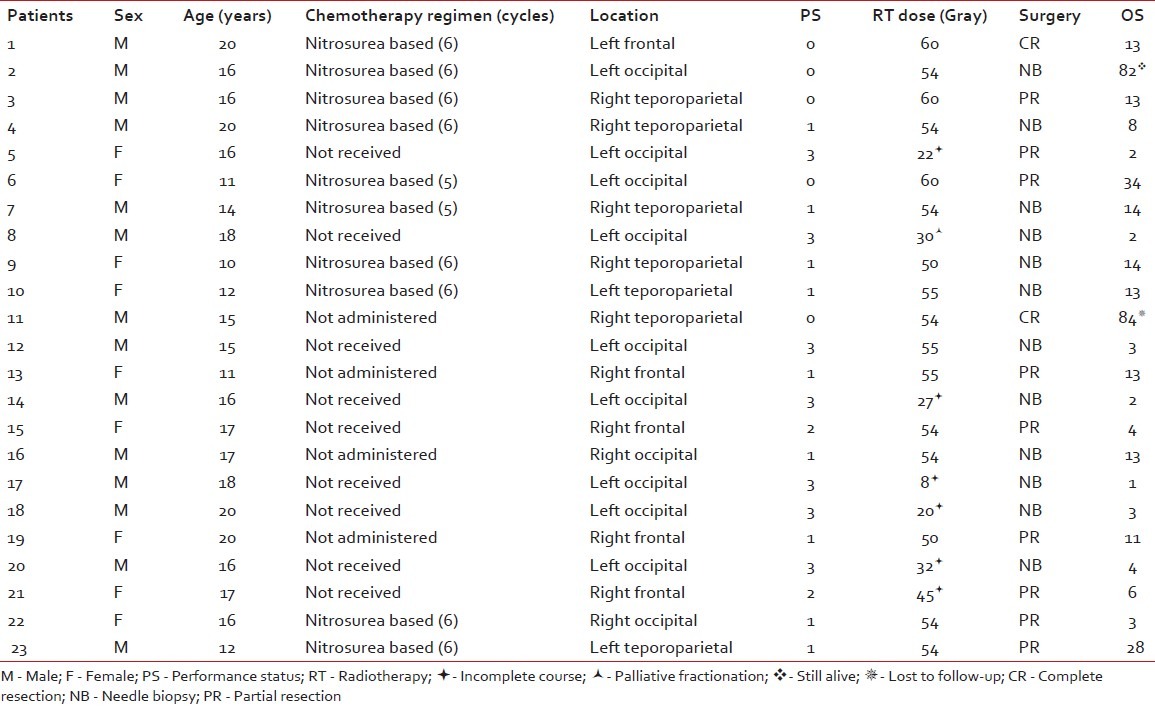 All potential prognostic factors including age, sex, tumor location, type of surgery, chemotherapy, radiation dose and preradiotherpay ECOG PS were analyzed to find out their impact on median survival of the patients with GBM. In univariate analysis, the patients who had received a radiation dose of less than 50 Gy had a significantly poorer outcome compared with those who had received more than 50 Gy (P=0.001). In addition, good ECOG PS (P=0.002) was found to have a favorable effect on median survival [Table 2]. In multivariate analysis using the stepwise logistic regression model, only ECOG PS of 0 or 1 (P < 0.001) retained statistical significance. 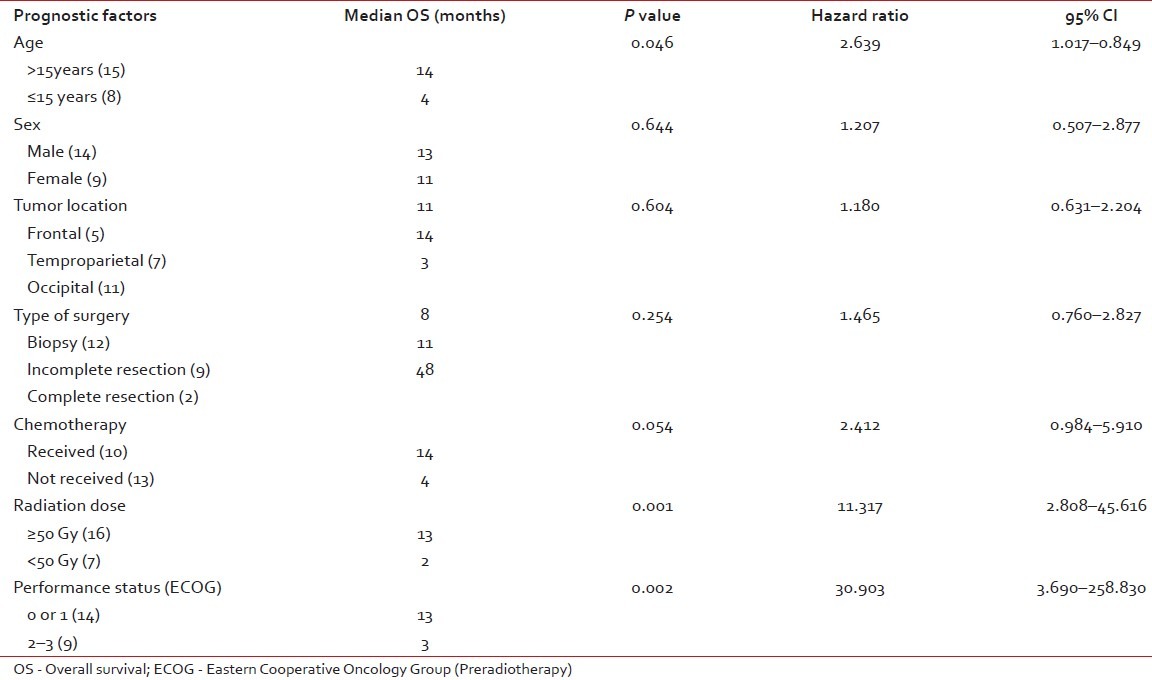 GBM is the most common adult brain tumor, and has poor prognosis. It is more common in men, and the male/female ratio is 1.3:1.45. Median survival is about 1 year and, even in some studies, less than 12 months (4, 8 and 9 months). Although it is not so usual, a patient being alive for more than 3 years is considered as long-term survival. GBM is associated with some hereditary diseases such as Li- Fraumeni syndrome and Turcot's syndrome, but it is usually sporadic.[8] GBM has no precursor lesion when occurring primarily, and is usually an adult population disease.[9] However, secondary GBMs arise from other astrocytomas after years.[10] There are reports from other centers on pediatric GBM [Table 3]. We studied GBM in young age (20 years or less) during 18 years from 1990 to 2008.

The most effective treatment in achieving long-term survival is surgical excision of the tumor, removal and then chemoradiotherapy followed by adjuvant chemotherapy by temozolomide. This schedule is now the standard treatment[2,15–17] Nitrosurea-based chemotherapy was previously used, but with small benefits.[15]

Some prognostic factors have been proposed and have been tested in studies. Among them, younger age ( < 40 years), extent of surgery (completeness of removal) and good PS are the strongest factors.[8,18,19] Because of infiltrative margin of the tumor, complete resection is usually not so applicable.[15,19,20] Some other factors such as hemoglobin level and midline shift are also suggested.[19] Postoperative radiotherapy also has a definite role in survival prolongation[9,19] But, dose escalation by hyperfractionation and newer devices such as cyberknife did not lead to survival benefit.[15,21]

Sánchez-Herrera et al. in a retrospective study at the Hospital Infantil de México Federico Gómez (HIMFG) in Mexico City reported pediatric GBM ( < 18 years) in their center.[10] There were 348 pediatric brain tumors during a 10-year period. Among them, 16 (4.5%) cases were GBM. In their study, tumor size (mean size 5.79 cm) had no relation to survival and outcome. But, the extent of resection correlated with survival. The survival in this study was much longer than ours and also other similar studies, as shown in Table 3. The mean age in their study was 8.8, which was lower than that of our patients’ mean age. The youngest patient in our study was 10 years old.

Dohrmann et al. in a study on 488 children with central nervous system neoplasm found 43 (8.8%) cases who were GBM affected.[11] This study was conducted in 1976 and, at that time, the longest overall survival was 22 months. They concluded a similar outcome when comparing with adult GBM. In their study, the frontal lobe was the most common primary site. In our series, more than half of the patients had occipital primary location.

Grovas et al., in a phase II study, used carmustine, thiotepa and etoposide followed by autologous stem cell rescue. From 11 cases, three patients had prolonged survival of 2.9, 3.9 and 5.1 years. They concluded that high-dose chemotherapy with stem cell transplant is feasible, but lung toxicity due to BCNU was prohibitive.[23]

Perkins et al. performed a retrospective study at the Washington University on 24 cases during 1970–2008. The patients’ mean age was 11 years (range 3–20 years), and 54% were male. Whole brain radiotherapy was used in seven cases and, comparing with newer techniques such as three-dimensional conformal radiotherapy (3DCRT), survival was shorter. But, attractively, 3DC-radiotherapy was not statistically superior to the conventional techniques. Nowadays, whole brain radiotherapy is not a part of GBM radiotherapy. Among their practice, only two cases were in the posterior fossa, but more than half of our patients had occipital tumors. The median survival was 13.5 months. In their study, age, race, gender or tumor location was not a prognostic factor. But, the extent of resection was associated with prolonged survival time. Among them, three cases had more than 5 years of survival.[13]

As shown in Table 3, our results were similar to other studies. Accordingly, we found five previously reported series including 155 cases on pediatric GBM. Overall survival in our patients was 3 months less than the mean, and the male to female ratio was as in other studies.

Genetic aberration and immunology in GBM is under investigation and their evaluation on treatment outcome has entered clinical practice. For example, bevacizumab and temozolomide are recently introduced to be effective in survival prolongation.[2] Suri et al. showed differences in genetics in pediatric and adult GBM.[12] This may reveal differences in treatment outcome or may lead to different treatments. Temozolomide is associated with survival improvement in adult GBM patients, but it is not so effective in pediatric cases. This may be related to O6-methylguanine-DNA methyltransferase (MGMT) gene expression.[23] Temozolomide administration in pediatric GBM requires further studies. Mutations of tumor suppressor genes and protooncogenes play important roles in the pathogenesis and progression of GBM. These molecular genetic alterations are thus important targets for use in the early detection of these neoplasms. Therefore, the molecular analysis and profiling approaches using immunohistochemistry would provide novel diagnostic and prognostic perceptions into the biology of GBM. In this series, there were no data regarding molecular markers and, currently, these markers are not routinely checked in patients with GBM in our institution.[14,19]

Pediatric GBM is not very common as adult; however, prognosis remains poor as seen in adult population. Although a small category may have prolonged survival, further investigations are necessary to disclose this group's characteristics, especially genetic and molecular markers.

The authors would like to thank Dr. Nasrin Shokrpour at the Center for Development of Clinical Research of Nemazee Hospital for editorial assistance.

Conflict of Interest: None declared