Persistent or recurrent Castleman?s disease - Look out for a lurking lymphoma!

Castleman′s disease, a rare condition of uncertain etiology clinically presents in isolated form or as a multicentric disease. The multicentric form can develop malignancies such as Kaposi′s sarcoma or lymphomas. We present a case of Castleman′s disease with coexisting interfollicular Hodgkin′s lymphoma that was confirmed by immunohistochemistry. This case report highlights the fact that an occult lymphoma has to be ruled out in persistent or recurrent Castleman′s disease.

Castleman's disease, a rare condition of uncertain etiology clinically presents in isolated form or as a multicentric disease. The multicentric form can develop malignancies such as Kaposi's sarcoma or lymphomas. We present a case of Castleman's disease with coexisting interfollicular Hodgkin's lymphoma that was confirmed by immunohistochemistry. This case report highlights the fact that an occult lymphoma has to be ruled out in persistent or recurrent Castleman's disease.

A 68-year-old hypertensive and diabetic lady presented with multiple bilateral cervical and axillary lymphadenopathy. Six months before this visit, she presented with a solitary left cervical lymphadenopathy which on excision biopsy showed features of hyaline-vascular type of Castleman's disease. Physical examination on the second visit revealed multiple bilateral cervical and left-sided axillary lymph nodes that were non-tender, discrete, firm in consistency and ranged in size from 0.5 to 8 cm. No organomegaly or constitutional symptoms were noted. Routine investigations such as complete blood count and biochemical profile (including hepatic function tests) were found to be within normal range except for mildly raised globulins (3.9 g/dl). Bone marrow aspiration done showed normal reactive marrow. Chest X-ray and computerized tomography (CT) scan of abdomen was normal. CT of thorax revealed left axillary adenopathy but mediastinum and lung fields were normal. Patient was seronegative for human immunodeficiency virus (HIV) by Western blot method.

Inspite of a course of antibiotics there was no reduction in lymphadenopathy in the 2nd visit. Hence clinically, a recurrent Castleman's disease was suspected and the largest axillary lymph node was excised and sent for histopathological confirmation. The biopsy showed partial effacement of lymph node architecture with expansion of paracortical and interfollicular regions. 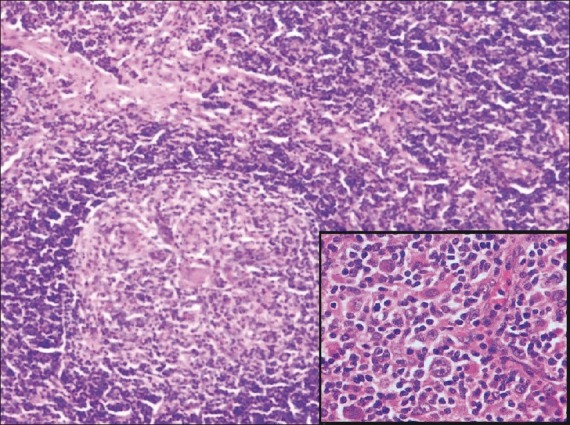 A panel of immunohistochemical (IHC) markers on tissue sections showed positivity for CD15 and CD30 with negative staining for CD 45 in RS-like cells and few background lymphocytes showed CD 20 positivity [Figure 2]. At this point, the previous lymph node biopsy sections were reviewed and no evidence of Hodgkin's disease was found. Correlating the clinical, histomorphology and immunohistochemistry, the final diagnosis of Castleman's disease (hyaline vascular type) with a coexistent interfollicular Hodgkin's lymphoma (Stage IIA) was arrived at. 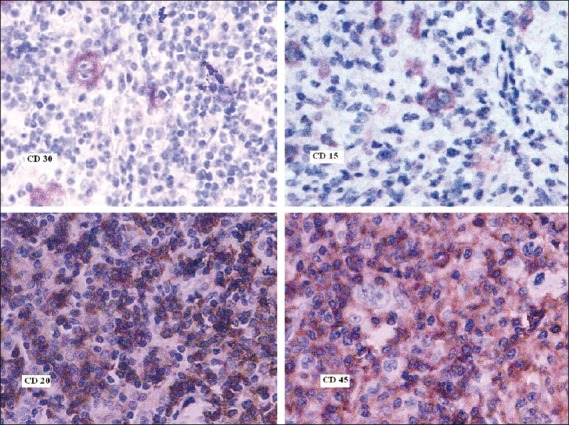 The patient was given three cycles of chemotherapy with COPP (Cyclophosphamide, Oncovin, Procarbazine and Prednisolone). She developed hyperglycemia, hence the chemotherapeutic drugs were changed to ABVD (Adriamycin, Bleomycin, Vinblastine, Dicarbazine) regimen for the next three cycles. Patient is now in complete remission after 2 years of diagnosis and treatment.

Utilization of IHC stains proved to be a valuable tool in identifying the RS cells in our case. Zarate-Osorno documented similar cases exhibiting diagnostic problems in which IHC was useful in detecting the evidence of Hodgkin's lymphoma in Castleman's disease.[2] Likewise Maheswaran et al. reviewed cases previously diagnosed as Castleman's disease presenting later as Hodgkin's disease and IHC studies on these cases showed positivity for CD 15 and CD 30 indicating that a coexisting Hodgkin's was overlooked on initial biopsy.[3] In our case, previous lymph node biopsy showed only hyaline-vascular pattern of Castleman's disease with no evidence of Hodgkin's lymphoma.

The pathogenesis of Castleman's disease is complex. Recently Kaposi's sarcoma associated Herpes virus (also called Human Herpes virus – 8) was reported to be an etiological agent of Castleman's disease, especially in patients infected with HIV. The association of interleukin-6 (IL-6) in the evolution of Castleman's disease is suggested due to an increased IL-6 production by the germinal centres. Monoclonal antibody blocking the IL-6 receptor have shown clinical efficacy resulting in symptom resolution.[4] Several treatment protocols have been designed for Castleman's disease. In case of a localized disease, the options include excision of the affected lymph nodes and radiation. Corticosteroid, chemotherapy drugs and radiation therapy are treatment modalities available for multicentric disease. Targeting and deleting CD20-positive B cells, a prominent component of Castleman's disease, is a new immunotherapeutic approach which is responsible for the deregulated productions of human IL-6, vascular endothelial growth factor (VEGF) and other cytokines as well.[5]

Lymphoma occurring within the context of Castleman's disease should be treated with standard lymphoma chemotherapy regimen. Targeted therapy may be used against cytokines IL-2R and IL-6, the increased levels of which are responsible for characteristic B symptoms. Purging of CD20 positive cells using antiCD20 therapy might also be beneficial, since it deprives RS cells of a survival factor.[6] In our case, the patient responded well to COPP and ABVD therapy and after six cycles of chemotherapy, the patient is in complete remission for 2 years.

Rare cases of Hodgkin's lymphoma may present initially with a histological picture indistinguishable from Castleman's disease and the diagnosis may become evident only at a late stage. Therefore, before a final diagnosis of Castleman's disease is made, the lymph node must be scrutinised thoroughly for the subtle evidence of lymphoma using a panel of immunomarkers.