Leiomyosarcoma is a soft-tissue neoplasm of smooth muscle origin. Primarily, it occurs in the myometrium, retroperitoneum, or dermis of the extremities; primary leiomyosarcoma of the adrenal gland is very rare. Till date, only 30 patients have been reported. Here, we report another case of primary adrenal leiomyosarcoma and review of the clinical and pathological characteristics.

Leiomyosarcoma is a soft-tissue neoplasm of smooth muscle origin. Primarily, it occurs in the myometrium, retroperitoneum, or dermis of the extremities; primary leiomyosarcoma of the adrenal gland is very rare. Till date, only 30 patients have been reported. Here, we report another case of primary adrenal leiomyosarcoma and review of the clinical and pathological characteristics.

A 60-year-old female presented with a 2 years’ history of left abdominal pain radiating to the back. There were no constitutional symptoms, as well as recent weight loss. There was no history of hypertension, diabetes, and tuberculosis, and her HIV antibody was negative. Physical examination showed mild abdominal discomfort on palpation. Computed tomography was performed, which revealed a well-circumscribed heterogeneous mass measuring 7.6 cm × 7.7 cm × 6.8 cm located in the left suprarenal area, abutting distal pancreas, and kidney [Figure 1]. Neither venous thrombosis nor metastatic lesions were noted. Twenty-four hours urine collections for cortisol and catecholamines were normal, as were serum aldosterone and adrenocorticotrophic hormone levels.

What are the most common causes of such a presentation?

Other rare causes are neuroblastoma and nonprimary adrenal masses such as adrenal metastases, sarcomas, lymphomas, myelolipomas, and ganglioneuromas.

Based on the clinical diagnosis of nonfunctional adrenal tumor, a left adrenalectomy with splenectomy and distal pancreatectomy was performed.

Morphologically adrenal gland with tumor surface interface [Figure 2a], low power spindle fascicle with pleomorphic cell [Figure 2b], On immunohistochemical studies, the tumor cells stained positive for smooth muscle actin (SMA) [Figure 2c], desmin [Figure 2d], h-Caldesmon [Figure 2e] and CD34, and negative for CD117, S100, and DOG 1. The proliferation rate of ki67 was high (40%) [Figure 2f]. Based on the histopathological and immunohistochemical findings, the diagnosis of an adrenal leiomyosarcoma was made. 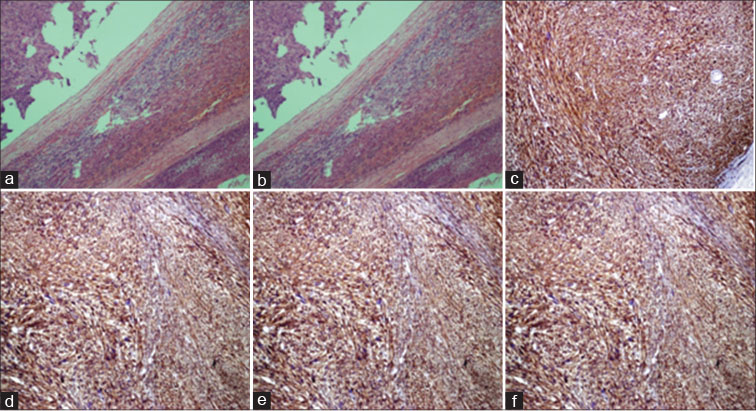 The postoperative period was uneventful; the patient was planned for adjuvant chemotherapy with ifosfamide with Adriamycin regimen.

How common is leiomyosarcoma of the adrenal gland?

PLAG is extremely rare and was first described by Choi and Liu in 1981.[1] Till date, only 30 cases of PLAG have been reported [Table 1].

Almost all clinically reported cases to date are elderly patients with large tumors. It is believed to originate from the smooth muscle wall of the central adrenal vein and its branches. Most patients present with abdominal or flank pain and some also present with lower limb edema and spider angioma when the tumor invades to the inferior vena cava. Incidence of Leiomyosarcoma of adrenal gland is similar in male and female. There is equal probability of either right or left adrenal gland origin. Most of the reported cases are of conventional type and only five cases are of pleomorphic variety.

It is interesting to note that four of the patients were immunodeficient due to HIV or Epstein–Barr virus infection. It seems that primary adrenal leiomyosarcoma (PAL) is likely to occur in an immunosuppressive situation, but nothing certain is known about the pathogenic involvement of these viruses.

As PLAGs do not produce any adrenal hormonal derangement and grow rapidly, there are no applicable tumor markers or imaging characteristics available for making a preoperative diagnosis, and all the cases were diagnosed after surgery or at necropsy. Encouragingly, Goto et al. reported a case of neuron-specific enolase (NSE)-producing PAL. The level of serum NSE was markedly high preoperatively and NSE protein was massively expressed in the resected tumor. After the surgery, serum NSE levels became normal. It is suggested that serum NSE levels could be a useful hallmark for the early detection for PAL. However, Kato et al. found that immunostaining for NSE was negative in their case. Hence, we need further research to seek a suitable tumor marker.

Histopathological and immunohistochemical evaluation is indispensable not only for determining tumor type but also for differential diagnosis. Conventional leiomyosarcomas show strong immunoreactivity for smooth muscle markers such as SMA and/or muscle-specific actin in 90%–95% of cases and desmin in 70%–90% of cases. However, there is a marked variability in the expression of these markers in pleomorphic leiomyosarcomas. Oda et al. reported that 37.5% of the pleomorphic leiomyosarcomas of various sites are desmin positive, 46.4% are muscle-specific actin positive, and 50% are SMA positive. Malignant fibrous histiocytoma, malignant melanoma, malignant hemangioperistoma, angiosarcoma, liposarcoma, carcinosarcoma, rhabdomyosarcoma, adrenal invasion by a retroperitoneal leiomyosarcoma, and metastatic tumors should be considered in the differential diagnosis of adrenal leiomyosarcomas.

Radical surgery is the mainstay of therapy, but the prognosis for PLAG patients is not predictable. It is believed that in patients with invasive diseases that include venous thrombosis, adjacent organ invasion, and distant metastases, the prognosis is extremely poor. We found that in all these 28 cases, 12 patients who had no recurrence or metastasis were almost without invasive diseases and none of them underwent any adjuvant therapy such as chemotherapy or radiotherapy. Adjuvant therapy combined with surgery is often used for PLAG patients with poor prognosis. In a systematic overview study, Strander et al. showed that postoperative adjuvant radiation therapy was recommended for the treatment of locally advanced malignancy in soft-tissue sarcomas. Radiation therapy and/or chemotherapy may be helpful to shrink the tumor and destroy the remaining tumor cells.

Primary adrenal leiomyosarcoma is an extremely rare mesenchymal tumor. Early and complete surgical resection is the mainstay management with PFS benefit of adjuvant chemotherapy with ifosfamide and doxorubicin.