Primary pulmonary rhabdomyosarcoma in children: Report of three cases with review of literature

Rhabdomyosarcoma (RMS) occurs predominantly in infants and children. The most common sites are head and neck, genitourinary tract, and extremities. Primary pulmonary RMS is rare. It accounts for only 0.5% of childhood RMS and 4.4% of childhood pulmonary neoplasms.[1,2] To the best of our knowledge, only 27 cases have been reported in the English literature. This is a case series of primary pulmonary RMS in three children.

A male child aged 3 years, presented with recurrent right-sided pneumothorax with intercostal drainage for 1 year. Mass lesion was suspected and on posterolateral thoracotomy, a whitish-yellow multiple gelatinous soft cystic masses were found which were excised completely. The following roentgenogram showed excellent lung expansion. Histopathological review was suggestive of spindle cell sarcoma and immunohistochemistry (IHC) revealed cells positive for desmin and MyoD 1, suggestive of embryonal RMS. There was no evidence of metastasis and was staged as group II according to Intergroup rhabdomyosarcoma study (IRS) group. Child had received chemotherapy as per the IRS III protocol and was disease free for 160 months.

A female child aged 9 years, presented to hospital elsewhere with fever, cough, and hemoptysis for 2 months and decreased breath sounds in the right infra-axillary area. She was found to have mass lesion in the apical segment of right lower lobe by chest X-ray [Figure 1] and CT scan [Figure 2]. Patient underwent right thoracotomy with segmentectomy of apical segment of right lower lobe. The histopathology revealed lung tissue with a tumor composed of compact spindle cells arranged in fascicles, cells showed moderate pleomorphism with an occasional mitosis. The dissected two mediastinal lymph nodes showed reactive changes. IHC revealed cells positive for desmin, MyoD 1, and focally positive for S-100, suggestive of embryonal RMS of spindle cell variant. The metastatic workup was negative. The patient received chemotherapy as per the IRS III protocol and was disease free for 19 months. 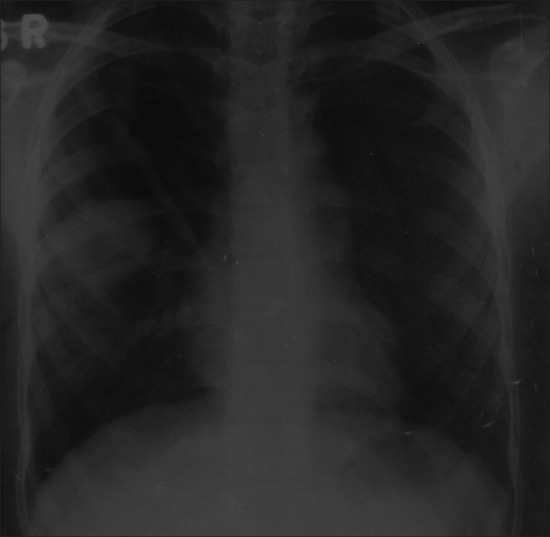 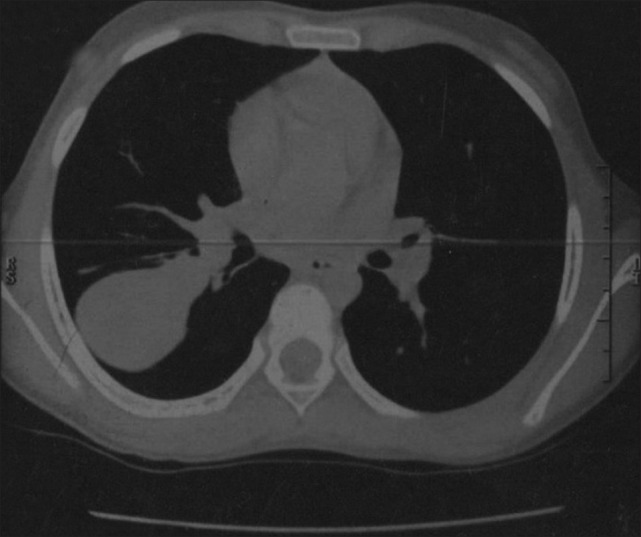 A female child aged 3 years, presented with history of dyspnea, fever, and cough for 2 months. She was diagnosed to have right-sided pneumothorax which did not improve following insertion of intercostal drainage. Later, CT scan showed mass lesion in right lower lobe with pneumothorax. She underwent exploratory thoracotomy with subtotal excision of right lower lobe mass. Histopathology showed spindle cell sarcoma [Figures ​[Figures33 and ​and4]4] and IHC revealed cells positive for desmin [Figure 5], focally for MyoD 1 [Figure 6] and H-caldesmon, suggestive of embryonal RMS of anaplastic type. Metastatic workup was negative. Parents refused adjuvant chemotherapy and child was disease free for 7 months. 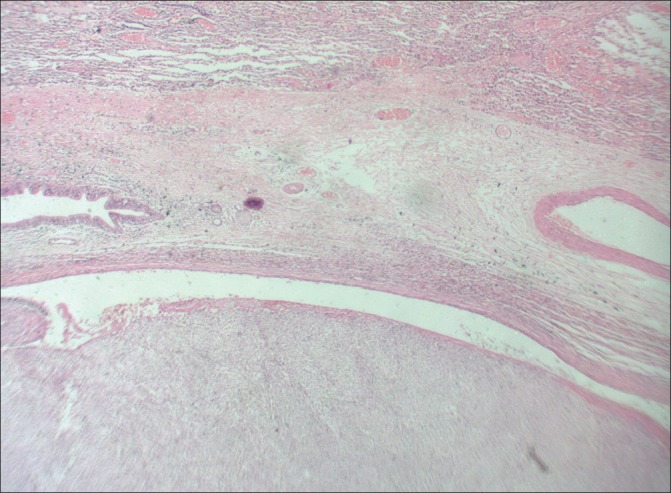 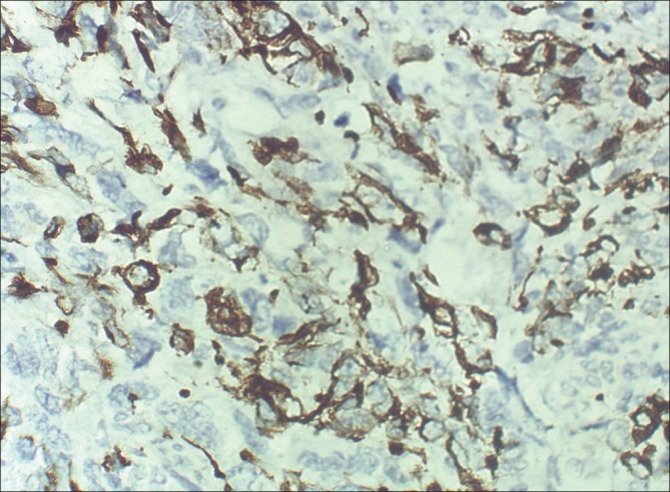 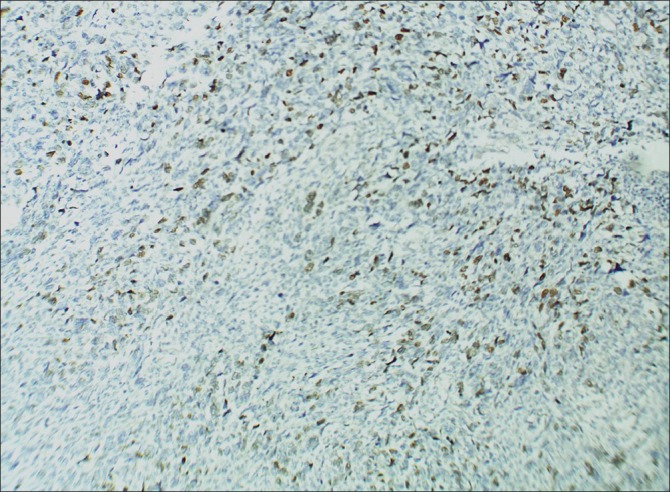 Primary pulmonary RMS is a rare disease in children, accounts for only 0.5% of pediatric RMSs and 4.4% of all childhood pulmonary neoplasms.[3] In the IRS involving 646 children with a primary pulmonary lesion, only three were from lung and four were pleural lesions.[4,5] When RMS develops in the pre-existing congenital cystic adenomatoid malformation (CCAM), spontaneous pneumothorax is one of the most common clinical presentation.[1]

In our case series, the cystic malformation was found only in case 1, which was confirmed by the intraoperative findings. As this child had undergone surgery elsewhere, we do not have enough evidence to say it as a CCAM.

Cystic pulmonary malformation can serve as a substrate for the development of primary RMS, pleuropulmonary blastoma, myxosarcoma, reticulosarcoma, hemangiopericytoma, bronchogenic carcinoma, and mesenchymoma.[6]

On reviewing the literature, the first case of pulmonary RMS was published by McDonald and Heather in 1939.[7] Among the 30 cases (including our cases) [Table 1], 16 arose from pre-existing pulmonary cystic lesions and 14 without any malformation including two from the bronchial wall.[8,23] The median age was 53 (range 13-168) months. The distribution was equal in both the lungs. Among the 30 cases, 29 underwent surgery, 18 received adjuvant chemotherapy, 8 received adjuvant chemoradiotherapy, and 1 received only chemoradiotherapy. The disease-free duration among these children ranges from 3 months to 160 months. 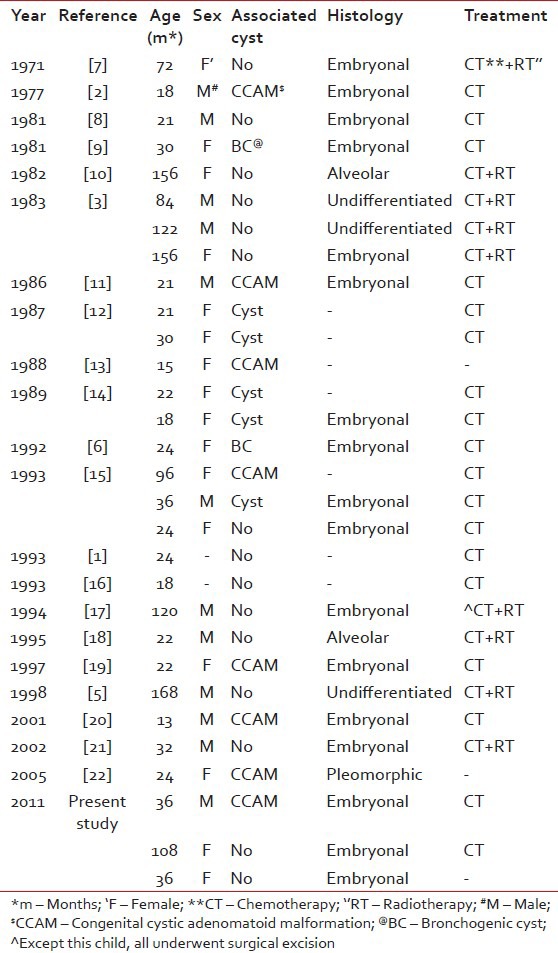 Although the etiological factors for the pulmonary RMS are unknown, it can be divided into two groups, those originating from normal lung and those from abnormal lung. Recently, there has been an increase in the number of cases detected with the availability of prenatal ultrasound scan.[24]

Two hypotheses were proposed for the origin of pulmonary RMS. First hypothesis states that tumor arises from heterotopic islets of striated muscles, thus explaining the frequent association of RMS with pulmonary malformations such as bronchogenic cysts, cystic adenomatosis and extralobar sequestration where these islets are usually present. In second hypothesis, a neoplastic transformation of the uncommitted mesenchymal cells present in the interstitial lung tissue or bronchiole. This seems to be more relevant for the cases not associated with cystic lesions.[25]

Surgical excision is considered the treatment of choice, adjuvant chemotherapy (vincristine, actinomycin, ifosfamide, and doxorubicin in combination) is recommended in all the cases and margin positive or residual disease should be irradiated.

The presence of simultaneous cystic lesion could be considered one of the favourable prognostic factor because it helps in early detection and complete surgical removal.

To conclude, the tumors of the lung should be considered in the differential diagnosis of a child who presents with a cystic mass. The cystic pulmonary malformation can serve as a substrate for the development of primary RMS, identification of malformed pulmonary tissue requires a careful follow-up. The early surgical intervention may prevent the long-term morbidity and mortality associated with advanced disease. The role of surgery in all asymptomatic congenital pulmonary malformations requires further evaluation.

I would like to thank Dr. Padma M, Dr. Mamatha HS, Dr. Kavitha S from Department of Pediatric oncology, Dr. Geetashree Mukherjee from Department of Pathology and Dr. Rajeev L.K, Medical oncologist at Kidwai Memorial Institute of Oncology, Bangalore for their help and support in preparing this manuscript.