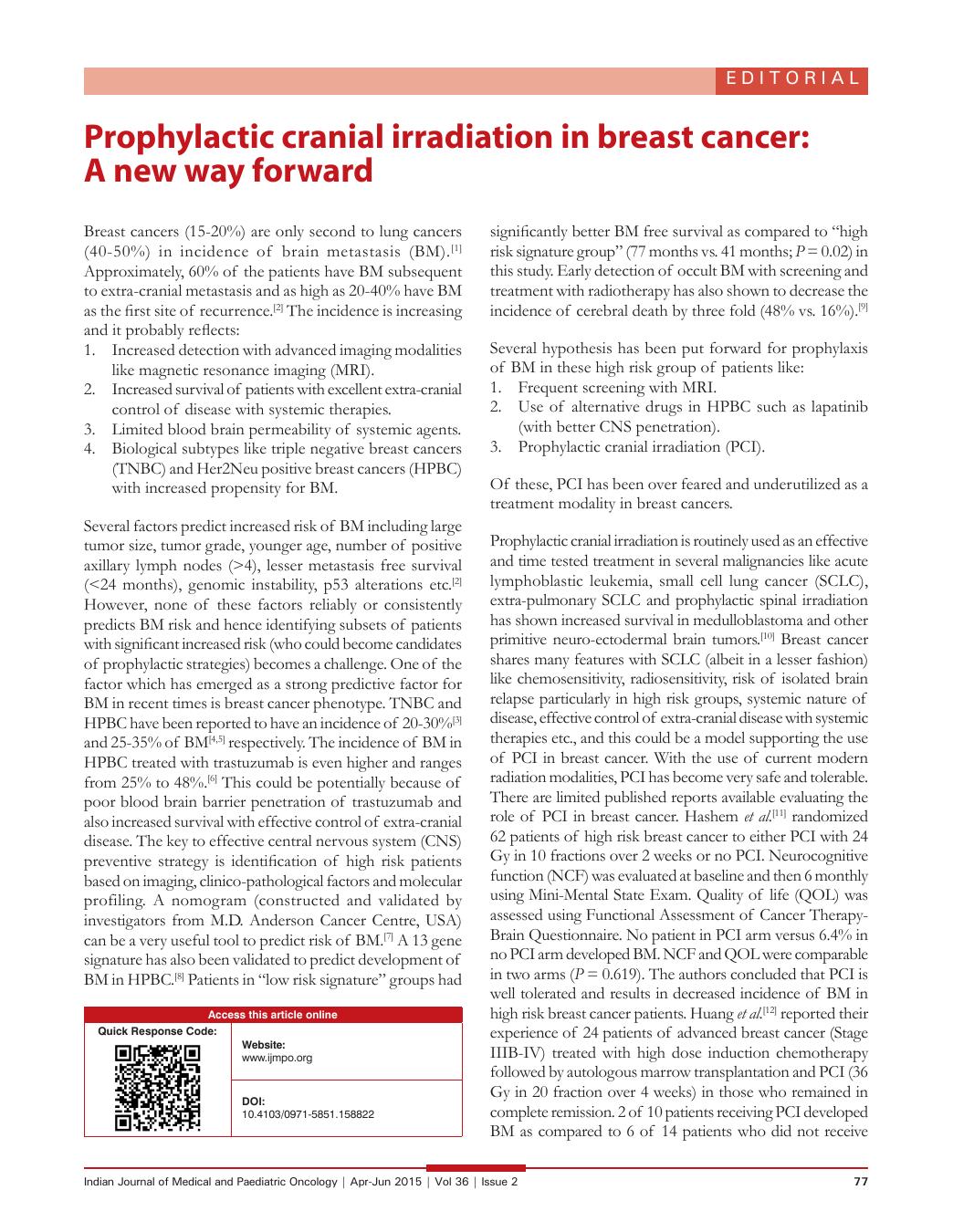 Breast cancers (15-20%) are only second to lung cancers (40-50%) in incidence of brain metastasis (BM).[1] Approximately, 60% of the patients have BM subsequent to extra-cranial metastasis and as high as 20-40% have BM as the first site of recurrence.[2] The incidence is increasing and it probably reflects:

Several factors predict increased risk of BM including large tumor size, tumor grade, younger age, number of positive axillary lymph nodes (>4), lesser metastasis free survival (< 24 months), genomic instability, p53 alterations etc.[2] However, none of these factors reliably or consistently predicts BM risk and hence identifying subsets of patients with significant increased risk (who could become candidates of prophylactic strategies) becomes a challenge. One of the factor which has emerged as a strong predictive factor for BM in recent times is breast cancer phenotype. TNBC and HPBC have been reported to have an incidence of 20-30%[3] and 25-35% of BM[4,5] respectively. The incidence of BM in HPBC treated with trastuzumab is even higher and ranges from 25% to 48%.[6] This could be potentially because of poor blood brain barrier penetration of trastuzumab and also increased survival with effective control of extra-cranial disease. The key to effective central nervous system (CNS) preventive strategy is identification of high risk patients based on imaging, clinico-pathological factors and molecular profiling. A nomogram (constructed and validated by investigators from M.D. Anderson Cancer Centre, USA) can be a very useful tool to predict risk of BM.[7] A 13 gene signature has also been validated to predict development of BM in HPBC.[8] Patients in “low risk signature” groups had significantly better BM free survival as compared to “high risk signature group” (77 months vs. 41 months; P = 0.02) in this study. Early detection of occult BM with screening and treatment with radiotherapy has also shown to decrease the incidence of cerebral death by three fold (48% vs. 16%).[9]

Several hypothesis has been put forward for prophylaxis of BM in these high risk group of patients like:

Of these, PCI has been over feared and underutilized as a treatment modality in breast cancers.

Prophylactic cranial irradiation is routinely used as an effective and time tested treatment in several malignancies like acute lymphoblastic leukemia, small cell lung cancer (SCLC), extra-pulmonary SCLC and prophylactic spinal irradiation has shown increased survival in medulloblastoma and other primitive neuro-ectodermal brain tumors.[10] Breast cancer shares many features with SCLC (albeit in a lesser fashion) like chemosensitivity, radiosensitivity, risk of isolated brain relapse particularly in high risk groups, systemic nature of disease, effective control of extra-cranial disease with systemic therapies etc., and this could be a model supporting the use of PCI in breast cancer. With the use of current modern radiation modalities, PCI has become very safe and tolerable. There are limited published reports available evaluating the role of PCI in breast cancer. Hashem et al.[11] randomized 62 patients of high risk breast cancer to either PCI with 24 Gy in 10 fractions over 2 weeks or no PCI. Neurocognitive function (NCF) was evaluated at baseline and then 6 monthly using Mini-Mental State Exam. Quality of life (QOL) was assessed using Functional Assessment of Cancer Therapy-Brain Questionnaire. No patient in PCI arm versus 6.4% in no PCI arm developed BM. NCF and QOL were comparable in two arms (P = 0.619). The authors concluded that PCI is well tolerated and results in decreased incidence of BM in high risk breast cancer patients. Huang et al.[12] reported their experience of 24 patients of advanced breast cancer (Stage IIIB-IV) treated with high dose induction chemotherapy followed by autologous marrow transplantation and PCI (36 Gy in 20 fraction over 4 weeks) in those who remained in complete remission. 2 of 10 patients receiving PCI developed BM as compared to 6 of 14 patients who did not receive PCI. This study demonstrated the benefit of PCI in high risk breast cancers; however, the results cannot be extrapolated to routine practice owing to the complex protocol followed in this study (which is not the current standard). Of note, a Phase III trial[13] evaluating the role of PCI in locally advanced or metastatic HPBC has been completed (with accrual of 390 patients between 2007 and 2010) and is awaiting results to be published. This trial used a dose of 30 Gy in 10 fractions over 2 weeks and aimed to test the reduction of symptomatic BM from 35% to 21% at 2 years. Preliminary results of this trial on NCF were presented at the 33rd Annual meeting of San Antonio Breast Cancer Symposium.[14] At this time, 23% patients in PCI versus 41% in no PCI arm had developed BM and there was no difference in NCF and QOL in both the arms. Currently, this trial is awaiting mature follow-up before final result with meaningful conclusions are available and the authors have not further updated their results.

With the limited evidence available, this is clear that PCI does work in high risk breast cancers but the probable fear of toxicities particularly neurocognitive decline has prevented it's widespread use. Neurocognitive outcome data from PCI in SCLC[15] suggest no detrimental effect on long term follow-up. Interestingly it has been found that < 8% of patients[16] of BM have their disease within 5 mm of the hippocampus (considered very important for NCF) and this has led to introduction of hippocampal sparing radiotherapy techniques[17] to further decrease the risk of NCF decline. In the present day practice of modern radiation oncology, it is very safe and feasible to practice PCI with moderate doses of 25-30 Gy with minimal or no toxicities.

Based on the above discussion, we Hypothesize that PCI should be tried (under clinical protocol setting) in high risk breast cancer patients (advanced stage TNBC and HPBC; nomogram and gene signature predicted patients) with doses of 25-30 Gy and preferably should be planned with hippocampal sparing techniques. Proper NCF and QOL evaluation should also be done along with the BM specific survival endpoints (like BM free survival). Hopefully the time has come to move away from hype to a new ray of hope for this subset of patients!!