Platinum based doublets chemotherapy are the standard of care for metastatic or advanced non-small cell lung carcinoma. This leads to modest survival advantage and improve quality-of-life. However, patients with advanced or metastatic disease eventually present disease progression and needs second-line systemic therapy in a selected group of patients or other supportive measures. There is very little knowledge available from the literature about the prognostic variables in patients, who receive second-line therapy.

The performance status has shown consistent result as a prognostic factor in univariate and multivariate analysis for OS and survival after second-line therapy. These findings may also facilitate pretreatment prediction of survival and be used for selecting patients for the correct choice of cytotoxic therapy.

Metastatic or loco-regionally advanced non-small cell lung carcinoma (NSCLC) is one of the leading causes of death attacked with cancer in India and though treatment outcomes in advanced disease remain modest, with the paradigm shift in the approach to treatments. They are steadily improving. Customized treatment based on the tumor histology and genetic profiles have become the standard of care.

Systemic chemotherapy with the platinum based doublets is the standard of care in metastatic or advanced NSCLC.[1,2,3] This leads to modest survival advantage and improve quality-of-life.

However, patients with advanced or metastatic disease eventually present disease progression and needs second-line systemic therapy in a selected group of patients or other supportive measures.

Second-line chemotherapy with docetaxel had shown to improve overall survival (OS) by means of 3 months and to delay the deterioration of quality-of-life in patients with good performance status.[4]

Pemetrexed is another anti-folate approved for use in non-squamous histology NSCLC as second-line chemotherapy and has emerged as a preferred option in this sub-group.[5,6]

The NCIC trial BR21 had shown that the benefit of erlotinib after of first-line chemotherapy in NSCLC. Treatment with erlotinib improves progression free survival (PFS) (hazard ratio: 0.61, P=0.001) and then erlotinib approved for the treatment of advanced NSCLC after the failure of upfront chemotherapy.[7]

The objective of this study was to identify the clinical or demographic predictive factors for survival of advanced or metastatic NSCLC who received second-line therapy.

We retrospectively reviewed 329 patients received second-line treatment from July 2007 to September 2011 in the Department of Radiation Oncology, Burdwan Medical College and Hospital.

They met the following inclusion criteria;

All of the analysis performed using the SPSS Statistical Software Program Package (SPSS Version 16, SPSS Inc., Chicago). The difference of the clinical characteristic between the groups was analyzed by Chi-square test and Student t-test. OS calculated from the first cycle of chemotherapy to the date of death from any cause or the date of last follow-up.

Survival after second-line chemotherapy calculated from the 1st day of starting second-line therapy to the date of death from any cause or date of last follow-up. PFS defined as the period from the first day of chemotherapy until the progression of disease or death. PFS and OS estimated using the Kaplan-Meier method. The multivariate analysis by Cox regression model used to determine statistical significant variables. The difference was assumed to be significant when P=value < 0.05.

Between July 2007 and September 2011, 329 patients received second-line systemic therapy or best supportive care (BSC) after failing platinum based doublet chemotherapy. The median age of the female and male patients was 56 and 57 respectively. Patients with good (ECOG 0-1) and poor performance (ECOG 2-3) status was 66.3% and 33.7% respectively. Less than half (42%) of the patients were presented with metastatic disease.

Squamous is the most common (56%) histological type. There was a significant association between the tumor histology and sex. Adenocarcinoma was the most common among women. The median survival after the starting of second-line treatment or BSC was 5 months. 27 patients were also received third-line system therapy [Table 1].

The results of univariate analysis of survival after second-line treatment and OS are summarized in Table 2. Among the 12 variables included for binary logistic analysis, all the above identified to have significant prognostic factors for survival after second-line treatment except the stage at diagnosis, 1st line chemotherapy and site of failure after 1st line chemotherapy. 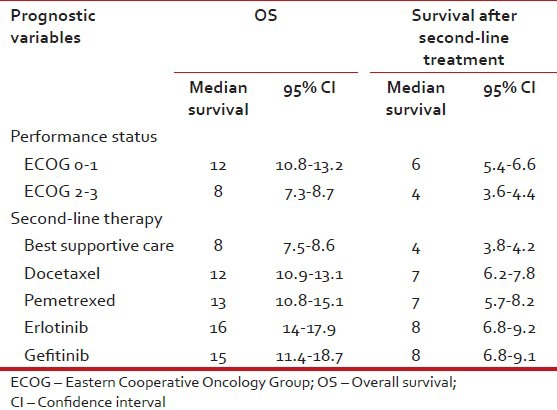 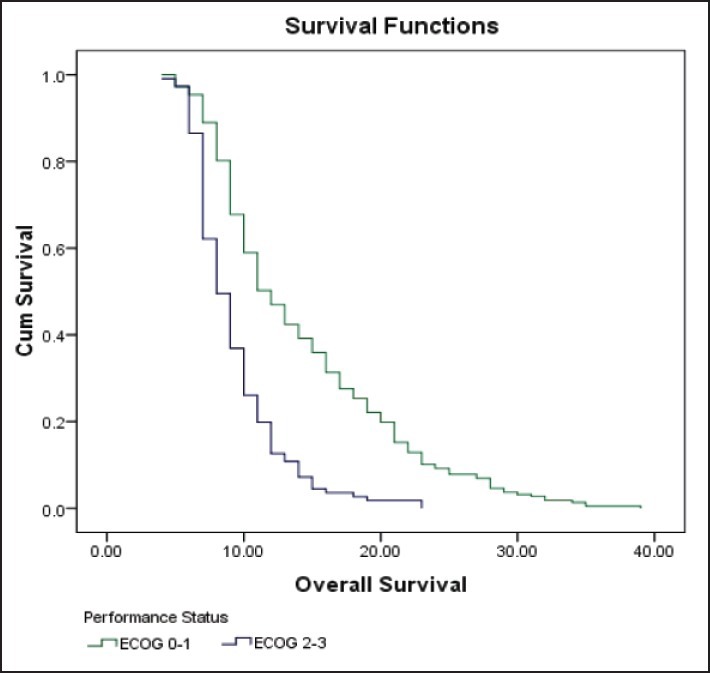 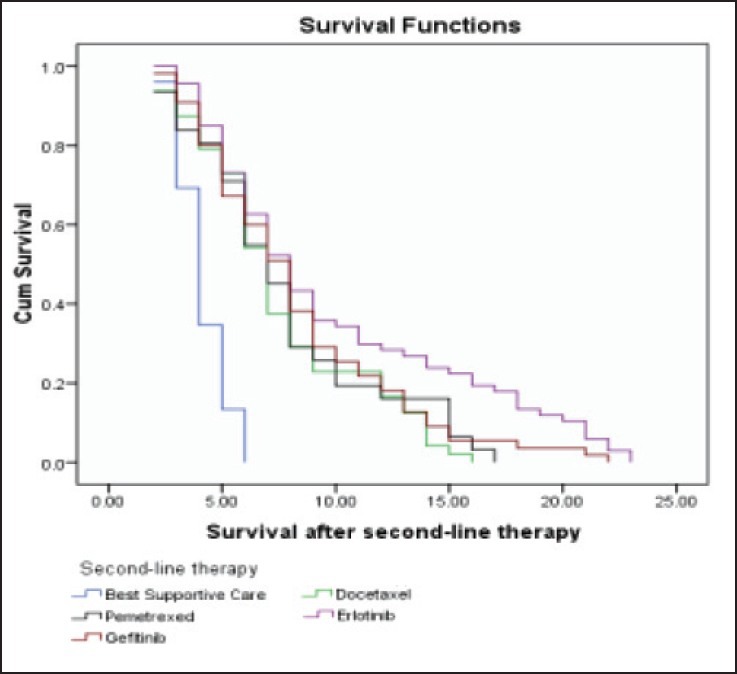 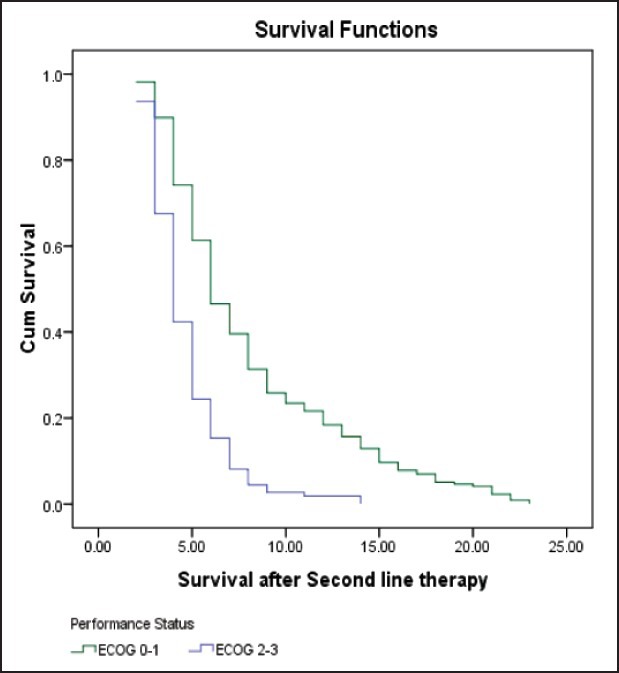 Docetaxel, Pemetrexed and TKIs (Erlotinib and Gefitinib) have significantly changed the treatment paradigm for advanced NSCLC. However, the optimal integration of first-line and second-line chemotherapy is yet to be defined.

This retrospective study has shown the potential influence of PS and the second-line cytotoxic therapy on the outcome of the second-line treatments and the PS as well as age, smoking habits, PFS and second-line therapy had strong predictive value in OS. The outcomes were similar regardless of the response to first-line cyto-toxic therapy and did not accord with the results of.[9] This might be due in inadequate treatment with first-line chemotherapy containing etoposide and retrospective review analysis.

It remains ambiguous whether stage at the time of diagnosis (IIIA, IIIB or IV) in patients receiving second-line cytotoxic agent will ensure prognostic knowledge for OS. Weiss et al., Di Maio et al., Scartozzi et al.[12,13,14] had shown significant predictive value of stage at diagnosis on the OS while Di Maio et al. and Zietemann and Duell[9,15] did not mention the prognostic value of the stage.

In our study, stage at diagnosis did not identify as a prognostic variable for OS or survival after second-line treatment. This may be due to retrospective analysis, the difference of the treatment choice and etoposide included in the first-line chemotherapy regimen. The main limitation of this study was retrospective study, we did not evaluate the molecular characteristic of tumor and first-line chemotherapy did not base upon the histopathology and small number of patients included for analysis.

The PS has shown consistent result as a prognostic factor in univariate and multivariate analysis for OS and survival after second-line systemic treatment. These findings may also facilitate pretreatment prediction of survival and be used for selecting patients for the correct choice of cyto-toxic therapy.

More prospective multicentric randomized studies are required to answer the treatment option in the second-line therapy in NSCLC or beyond. Consequently, subset and retrospective analysis might help to guide future studies and hypothesis. Two additional areas that may be worth pursuing in the data collection would be quality-of-life improvement and toxicity experiences by the patients during or after second-line therapy.