Sedation and analgesia during bone marrow aspiration in children: Is ketamine and propofol combination (Ketofol) an appropriate agent? 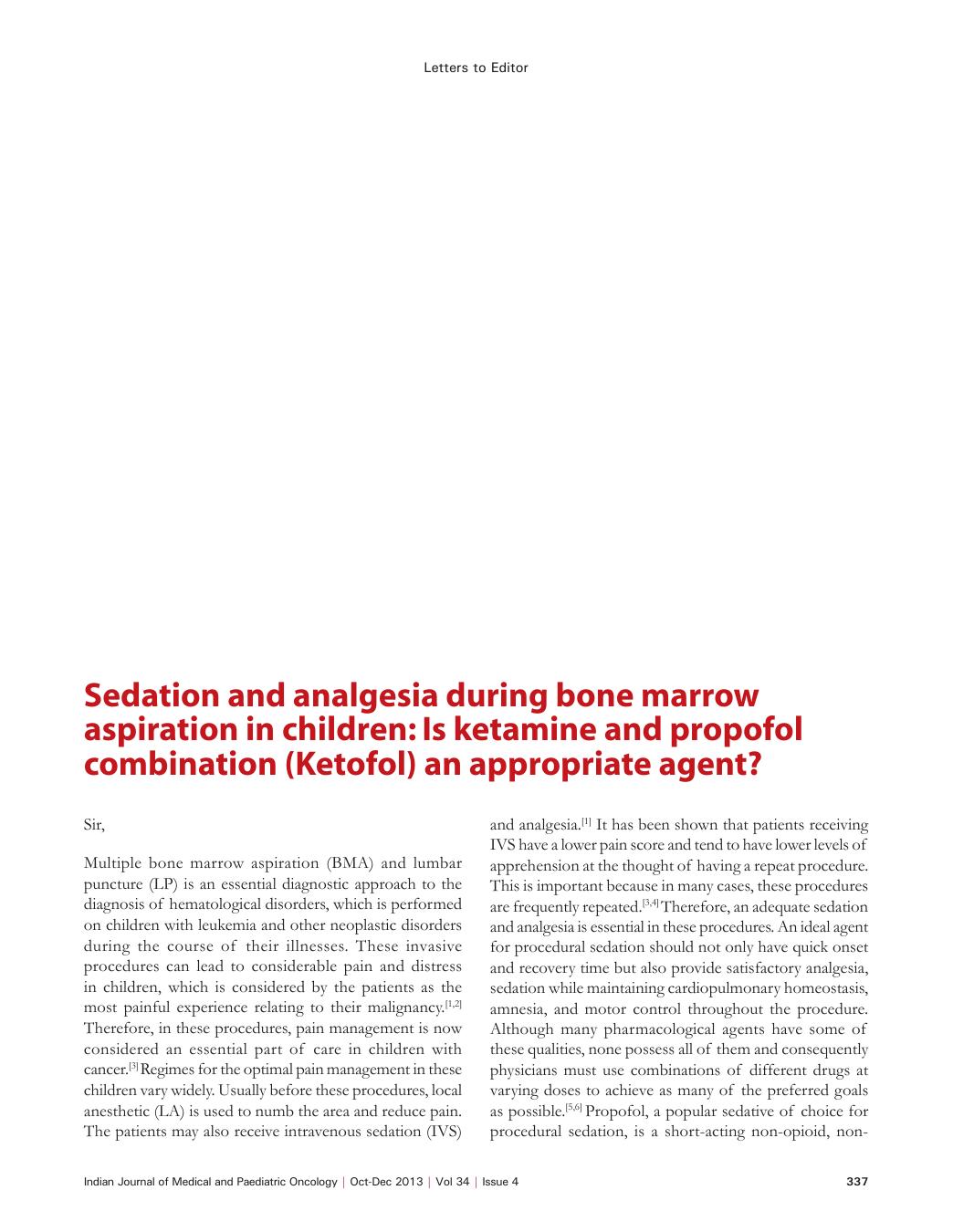 Multiple bone marrow aspiration (BMA) and lumbar puncture (LP) is an essential diagnostic approach to the diagnosis of hematological disorders, which is performed on children with leukemia and other neoplastic disorders during the course of their illnesses. These invasive procedures can lead to considerable pain and distress in children, which is considered by the patients as the most painful experience relating to their malignancy.[1,2] Therefore, in these procedures, pain management is now considered an essential part of care in children with cancer.[3] Regimes for the optimal pain management in these children vary widely. Usually before these procedures, local anesthetic (LA) is used to numb the area and reduce pain. The patients may also receive intravenous sedation (IVS) and analgesia.[1] It has been shown that patients receiving IVS have a lower pain score and tend to have lower levels of apprehension at the thought of having a repeat procedure. This is important because in many cases, these procedures are frequently repeated.[3,4] Therefore, an adequate sedation and analgesia is essential in these procedures. An ideal agent for procedural sedation should not only have quick onset and recovery time but also provide satisfactory analgesia, sedation while maintaining cardiopulmonary homeostasis, amnesia, and motor control throughout the procedure. Although many pharmacological agents have some of these qualities, none possess all of them and consequently physicians must use combinations of different drugs at varying doses to achieve as many of the preferred goals as possible.[5,6] Propofol, a popular sedative of choice for procedural sedation, is a short-acting non-opioid, non-barbiturate, and sedative-hypnotic agent with rapid onset and short duration of action. It possesses antiemetic effects and reliably produces sedation.[5] Its adverse effects include dose-related respiratory and cardiovascular depression and bradycardia. Propofol is known to be amnestic, but lacks analgesic effect and, therefore, is commonly combined with an analgesic agent.[5,6,7] Ketamine is a fast-acting dissociative anesthetic that produces a profound analgesic effect. It causes little or no respiratory or cardiovascular depression, and due to its cardiostimulatory effects and strong safety profile, has gained favor for procedural sedation and analgesia in children,[8] although it has some drawbacks such as the incidence of emergence reactions at increasing doses, which may include nightmares or vivid hallucinations.[5] In theory, the opposing hemodynamic and respiratory effects of these drugs might be complementary and minimize the overall adverse effects. The use of ketamine in combination with propofol (Ketofol) has been shown to decrease the dose of propofol required to achieve sedation, and is believed to result in less toxicity than that caused when either drug is used alone, because their complementary effects enable the use of lower doses of each drug.[7] Since Ketofol is a relatively new idea for most medical practitioners, there is little in the scientific literature on its use for procedural sedation and analgesia during BMA and LP in children, although its clinical efficacy for pediatric sedation in other situations such as in emergency department and pediatric orthopedic surgery has previously been described.[8,9,10,11] In a study by da Silva et al. conducted with an aim to evaluate the safety and effectiveness of Ketofol (1:1 mixture of ketamine 10 mg/ml and propofol 10 mg/ml) for procedural sedation and analgesia in children undergoing BMA, it was observed that Ketofol provides effective sedation (reflected in the high degree of satisfaction recorded by the children) and also rapid recovery with no clinically significant complications.[5] In another study by Hashemi et al. conducted with an aim to compare the efficacy, respiratory and hemodynamic profiles, and the side effects of two various doses of Ketofol, equal amount of propofol and ketamine (1:1) or two parts of propofol plus one part of ketamine (2:1), in children with acute lymphoblastic leukemia (ALL) undergoing BMA and LP, it was observed that although sedation scores in both groups were similar, there was increased postoperative nausea, psychomimetic side effects, and increase in recovery time with the largest ketamine dosage. Therefore, it was concluded that the adjunctive use of smaller dose of ketamine in Ketofol combination minimizes the psychomimetic side effects and shortens the recovery time.[12] Ghadami Yazdi et al. in a randomized clinical trial conducted with an aim to compare two different combinations of Ketofol, one part of ketamine and two parts of propofol (1:2) or one part of ketamine and three parts of propofol (1:3), to reach necessary sedation scale for the LP or BMA in pediatric patients with ALL, it was observed that lower doses of ketamine in these combinations caused lower psychomimetic side effects and shorter recovery time.[13]

In another study by Daabiss et al. performed with an aim to compare the quality of analgesia and side effects of intravenous varying concentrations of Ketofol, admixture of propofol:ketamine (1:1) or propofol:ketamine (4:1), in children undergoing procedural operations including BMA, esophagoscopy, rectoscopy, and liver biopsy, it was observed that there were no significant hemodynamic changes in both groups of children. It was concluded that adjunctive use of smaller dose of ketamine in Ketofol combination minimizes the psychomimetic side effects and shortens the time to discharge.[14]

In summary, considering the importance of pain management in children undergoing BMA and also analyzing the results from the recent studies about the use of Ketofol as an effective agent for procedural sedation and analgesia during BMA in children, it seems that propofol-ketamine combination (Ketofol) can be used as a safe and appropriate agent for procedural sedation and analgesia during BMA, although further clinical trials are required to identify the effectiveness of Ketofol as well as the optimum dose of ketamine and propofol in combination for these patients.