Teratomas are one of the common anterior mediastinal tumors and on imaging demonstrate soft tissue, fluid, fat, calcification or a combination of these.[1,2] Complications developing from these tumors are rare and imaging plays a vital role in the detection of these complications. We present two cases of spontaneous pulmonary and pleural rupture of benign mediastinal teratoma and discuss the imaging hints for its preoperative detection.

A 19-year-old male presented with history of cough with scanty expectoration for 4 months and history of chest pain on right side for 3 days. There was no history of fever or hemoptysis. There was dull note on percussion and reduced breath sounds on the right side of chest. Chest radiograph (not shown) showed opaque right hemithorax with shift of the mediastinum to the left. Contrast enhanced computed tomography (CT) scan [Figure 1] showed a heterogeneous mass in the anterior mediastinum with small focus of fatty attenuation (HU of -36) within. Few small pockets of air were seen within the mass. The mass was closely abutting the middle lobe bronchus. There was gross right-sided pleural effusion, with near complete collapse/consolidation of the right lung and the pleural fluid showed fatty attenuation in its anterior aspect [Figure 1]. Magnetic resonance imaging (MRI) of the chest done for further characterization of the mediastinal lesion showed heterogeneous mass with hypointense capsule on T2-weighted images [Figure 2]. On T1-weighted images, there was an area of hyperintensity that showed signal suppression on fat-saturated images [Figure 3]. Pleural effusion and right-lung collapse/consolidation were also noted. Based on the imaging features, a diagnosis of mediastinal teratoma with spontaneous pleural and pulmonary rupture was made. The patient was operated and the mediastinal mass was excised. At surgery, the mass was encapsulated and showed an area of rupture into the lung; the pleural fluid was thick and yellow and showed internal septations. The middle-right lobe bronchus was separate from the mass with no evidence of bronchial communication. Histopathological examination of the surgical specimen confirmed the diagnosis. The patient recovered uneventfully.

| Fig. 1 (a and b) Axial contrast enhanced CT scan shows a heterogeneous mass in the anterior mediastinum containing an area of fat (black arrow) and air pockets (arrow heads). The mass is closely abutting the middle-right lobe bronchus (white arrow). Gross pleural effusion with underlying lung collapse/consolidation is noted on the right side. A caudal section (b) shows freely floating fat tissue in the pleural fluid (arrows) 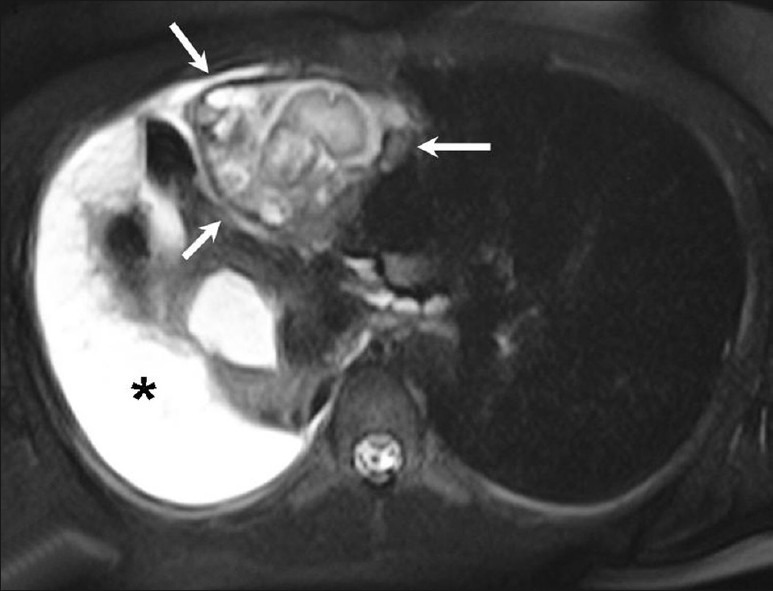 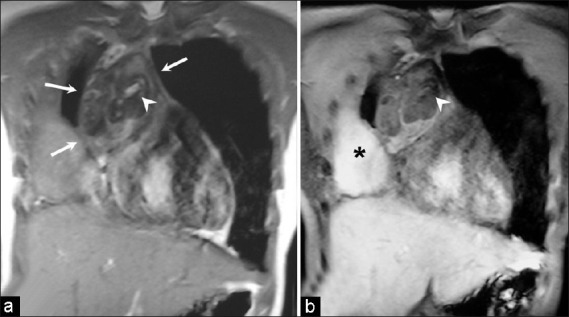 A 15-year-old male presented with history of gradual onset dyspnoea on exertion for 6 months. There was no history of hemoptysis, fever, or cough. Patient was diagnosed to have an anterior mediastinal mass 3 years ago, but had refused surgery. Physical examination revealed volume loss of right hemithorax with decreased breath sounds and coarse crepitations. Chest radiograph revealed airspace opacity with air-bronchogram in right hemithorax [Figure 4a]. Chest radiograph which was taken 3 years earlier showed a well-defined mediastinal-based mass on the right side, silhouetting the ascending aorta, suggesting its anterior location [Figure 4b]. The lungs were normal. Contrast enhanced CT scan revealed a heterogeneous anterior mediastinal mass with areas of soft tissue and fat density. The mass was extending into the adjacent right lung causing its consolidation with areas of fat density within consolidation. MRI was done prior to surgery that showed a fat intensity (hyperintense on T1 weighted images with suppression of signal on fat suppressed T1 weighted images) lesion in the anterior mediastinum involving the right lung with adjacent areas of consolidation [Figures ​[Figures5a5a and ​andb].b]. Diagnosis of mediastinal teratoma with intraparenchymal rupture was made. Patient was operated and right pneumonectomy was performed and histopathology confirmed imaging diagnosis.

Rupture of mediastinal teratoma is a rare complication, occurring in up to 36% of cases, most frequently into lung and the tracheobronchial tree, followed by pleura, pericardium, and great vessels.[2–5] Patients may present with hemoptysis, chest pain, or expectorate hair or sebaceous material. Among the various hypotheses proposed to explain the possible mechanisms of rupture, the most commonly accepted theory is autolysis of the walls of the tumor by the digestive enzymes produced by tissues (pancreas, intestine, salivary gland) leading to rupture.[6]

Benign unruptured mediastinal teratoma appears as a homogeneous mass on CT scan. However, after rupture, it becomes inhomogeneous probably due to the development of secondary inflammatory reaction.[7] Such a change in the appearance of the mass can also be depicted on MRI, as was seen in one of our cases. Other imaging findings of rupture include consolidation or atelectasis of adjacent lung and pleural or pericardial effusion. A fat-fluid level in the pleural effusion after rupture has also been reported.[8] Ruptured teratomas may mimic the imaging findings of malignant teratomas like spiculated borders, thick capsule, heterogeneous contents, and obliteration of fat plane. Nevertheless, acute clinical presentation gives a clue to diagnose ruptured teratoma.

Ruptured components of the teratoma cause inflammation and secondary adhesions in the lung or pleural cavity. This makes surgery challenging and a preoperative diagnosis helps in judicious planning of the time and approach of surgery. In our cases, the tumors had both pleural andth parenchymal rupture on imaging. Our preoperative diagnosis helped surgeons in better surgical planning.

In conclusion, spontaneous rupture of mediastinal teratoma is a rare complication. Heterogeneous appearance of the mass, changes in the surrounding lung, or effusion suggest rupture in an acute clinical scenario. A preoperative diagnosis is important for proper management of this rare but serious complication.

| Fig. 1 (a and b) Axial contrast enhanced CT scan shows a heterogeneous mass in the anterior mediastinum containing an area of fat (black arrow) and air pockets (arrow heads). The mass is closely abutting the middle-right lobe bronchus (white arrow). Gross pleural effusion with underlying lung collapse/consolidation is noted on the right side. A caudal section (b) shows freely floating fat tissue in the pleural fluid (arrows)