Tuberculosis of the oral cavity is a rare condition. A 55-year-old labourer was referred as a case of oral cancer for further management. The patient had no systemic symptoms. Biopsy of the lesion revealed caseating granulomatous inflammation. Chest X-ray and sputum revealed evidence of asymptomatic pulmonary tuberculosis. The purpose of this paper is to sensitize clinicians to consider oral tuberculosis as a differential diagnosis in patients with an Non-healing oral cavity ulcer.

Tuberculosis of the oral cavity is a rare condition. A 55-year-old labourer was referred as a case of oral cancer for further management. The patient had no systemic symptoms. Biopsy of the lesion revealed caseating granulomatous inflammation. Chest X-ray and sputum revealed evidence of asymptomatic pulmonary tuberculosis. The purpose of this paper is to sensitize clinicians to consider oral tuberculosis as a differential diagnosis in patients with an Non-healing oral cavity ulcer.

Tuberculosis of oral cavity is a rare entity. Even before antitubercular chemotherapy era, oral lesions occurred less commonly in patients with pulmonary tuberculosis. There are only few case reports and series on oral tuberculosis. Oral tuberculosis is often mistaken for other diseases like malignancy. We present to you one such case scenario.

A 55-year-old labourer was referred to the outpatient department of our centre as a case of suspected gingivobu-ccal carcinoma for further evaluation and management. He had a non-healing ulcer in the oral cavity for one and a half months, which was associated with pain.

He was a habituated tobacco chewer and beedi and cigarette smoker for 25 years. He did not have any other medical comorbidity. He had been well until six weeks earlier when he noticed a lesion in his oral cavity. It was an ulcer in the right gingivobuccal sulcus. His primary complaint was pain at the site. He visited the local doctor for this and was given symptomatic treatment and vitamin supplements. But the lesion remained persistent. He was then referred to our tertiary cancer care centre for evaluation.

On enquiry, he had no systemic symptoms of chronic disease like fever, weight loss, and loss of appetite or weight. He also had no history of tuberculosis or contact with a tuberculosis patient.

On clinical examination, his Oro-dental hygiene was poor. The patient had an ulcer in the right lower gingivobuccal sulcus of size about 2×1 cm and was covered with slough. [Figure 1] On palpation, significant induration was noted around the ulcer. There was also mild fullness and soft tissue induration in the cheek below the lip. There was no cervical lymphadenopathy. 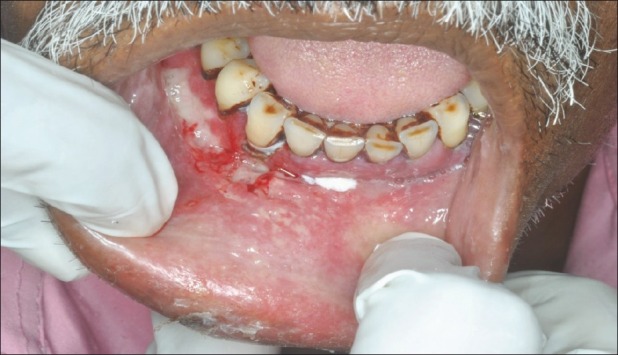 The patient's height was 167 cm; weight, 62 kg; blood pressure, 124/76 mm Hg; and pulse, 74 beats per minute. On further investigation, haemoglobin was 13.9 gm%, total white blood cell count was 6,400 cells/dl, and erythrocyte sedimentation rate was 13 mm at the end of one hour. Serology was negative for HIV.

The most common ulcers in the oral cavity are usually aphthous or traumatic ulcers. These are usually accompanied by associated history like a stressor event or the presence of a sharp tooth, etc, pointing to diagnosis. These respond well to symptomatic treatment and usually have a short course.

The most common cause of a non-healing ulcerative lesion in the oral cavity is malignancy. The history is usually that of a rapidly growing lesion that does not respond well to any form of management. In most cases, there is an accompanying history of long-term tobacco abuse. It is also usually accompanied by weight loss and features of chronic disease.

In a developing country, tuberculosis is an important differential to be kept in mind. Tuberculosis is a specific granulomatous disease with a world-wide distribution. It remains a major health problem in most developing countries. India accounts for nearly one-third of the global burden of tuberculosis. Every year, approximately 2.2 million people develop tuberculosis, of which about one million are new-smear positive highly infectious cases and about 5 lakh people die of tuberculosis every year.[1,2] This should be considered in the differential diagnosis, particularly in a non-healing lesion that does not respond to the usual therapy. Other uncommon causes are actinomycosis and syphilis.

Actinomycosis is a rare, chronic, spreading, suppurative, granulomatous and fibrosing infection characterised by the formation of multiple abscess, draining sinuses and the release of characteristic “sulphur granules”.[1] It is found worldwide and occurs at any age. peak incidence occurs between 15 and 30 years, and males are more frequently infected than females.[2]

Actinomycosis commonly occurs in three distinct forms. The majority of examples of the clinical disease are cervicofacial (55%), with only 20% occurring in an abdo-minopelvic form and 15% as a thoracopulmonic form.[3,4]

Actinomyces spp. are anaerobic or aerotolerant (facultatively anaerobic), non-sporulating, Gram-positive bacteria that tend to form branching rods and filaments and have a fermentative type of carbohydrate metabolism.[2,5] Actinomyces spp. are not regarded as virulent human pathogens and are best considered as opportunistic pathogens, as they are normally present in healthy individuals as commensals of the mouth cavity and the upper respiratory tract. Their presence in the oral and respiratory specimens does not necessarily signify clinical disease and might often not be reported. Most infections with Actinomyces spp. are polymicrobial.[6] The copathogens are most commonly colonisers of the respective organ systems involved. They act synergistically by inhibiting host-defense mechanisms or reducing the oxygen tension in the affected tissue, which promotes the growth of Actinomyces spp.[6,7]

Syphilis is an infectious disease caused by a spirochete called Treponema pallidum (TP), which has a tropism for several organs and tissues in the body, causing complex clinical manifestations.[1,2,5] Transmission of syphilis occurs mostly through sexual intercourse and sites of inoculations are usually genitals, though it can also be extragenital.[1,2,5] It is characterised by several different dermatological lesions, involving both skin and mucous membrane.

In the first stage of the disease (primary syphilis), oral chancres are observed in about 4-12% of patients. Syphilitic chancre is a solitary, painless, indurated, hard in consistency, reddish ulcer, accompanied by regional lymphadenopathy,[1] which is localised at the site of TP inoculation and usually resolves after approximately one month[1] without scarring. In secondary syphilis, the oral manifestations are characteristic lesions, which are multiple mucous patches that are slightly raised and covered by grayish, white pseudomembranes and surrounded by erythema. Oral lesions are often painful and snail track ulcers result when multiple mucous patches become confluent. Often nonspecific pharyngitis, tonsillitis and laryngitis are associated.

The diagnosis is confirmed by the specific serology and the demonstration of TP in the lesion. TP has a slender, coiled morphology and when examined by dark-field microscopy, it was seen moving in a drifting rotary motion (corkscrew). NAAT is better than dark-field microscopic examination in the case of oral lesions because of the possible presence of saprophytic TP in the mouth.

Chest X-ray revealed an ill-defined patchy opacity and reticulo-nodular opacities in the upper and mid zone of both lungs [Figure 2]. 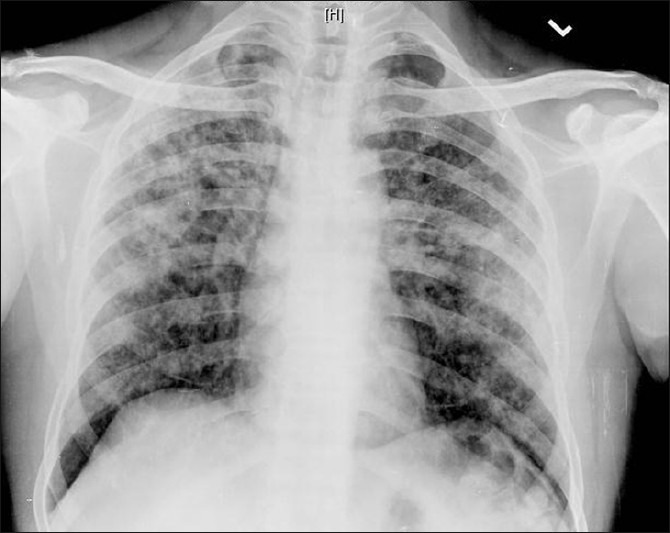 Sputum was positive for the presence of Acid-Fast bacilli 1+ in two consecutive samples.

The diagnostic test in this case was a punch biopsy of the lesion. It showed caseating granulomatous inflammation.

Tuberculosis of the oral cavity is rare because the intact mucosa is resistant to tuberculous infection and saliva has a protective effect.[3,9,10] Other possible causes for the relative rarity of oral tuberculosis include the presence of saprophytes in the oral cavity and resistance of stratified muscles to bacterial invasion.[11]

Tuberculous bacilli reach the oral cavity either by infected sputum or haematogenous route. Small abrasions caused by chronic irritation favour localisation of tubercular bacilli. Other predisposing factors are poor oral hygiene and dental extraction.[11,12] There are reports in which dentists with pulmonary tuberculosis have infected patients during dental manipulation.[13] Nasolabial infection occurred in a physician who administered mouth-to-mouth resuscitation to a tuberculosis patient.[4]

Oral tuberculosis most commonly affects the tongue.[14] Other sites include the gingiva, soft palate, lip, buccal mucosa, floor of the mouth, and gingivobuccal sulcus.[15]

Oral tuberculosis may present as single or multiple, painful or painless ulcers with irregular border. It can also present as nodules, fissures, vesicles, or peri-apical granulomas.[16] Oral tuberculosis may be associated with cervical lymphadenopathy. Rarely, it may present with osteomyelitis of the jaw.[15] The oral tuberculous ulcers have some characteristic clinical features including chronicity, hyperemic changes, and multiple or satellite lesions, which lead to the suspicion of a tuberculous lesion.[17]

The purpose of this paper is to alert clinicians to consider oral tuberculosis in patients with Non-healing oral ulcer.

Tuberculous ulcer of the oral cavity secondary to pulmonary tuberculosis.

From the Department of Head and Neck Oncology, Tata Memorial Hospital, Mumbai.