Is it time to reconsider indications for post-mastectomy chest wall irradiation? 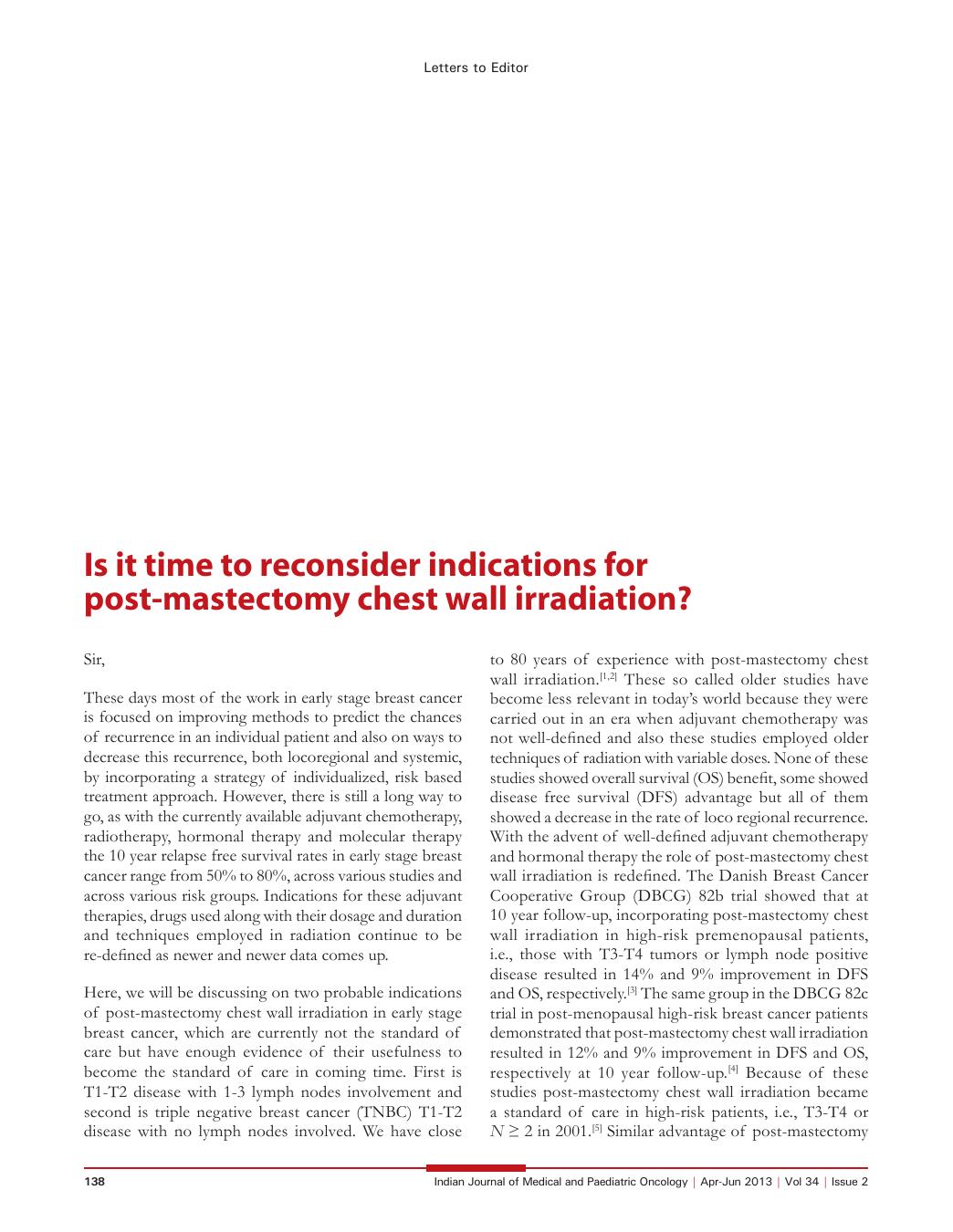 These days most of the work in early stage breast cancer is focused on improving methods to predict the chances of recurrence in an individual patient and also on ways to decrease this recurrence, both locoregional and systemic, by incorporating a strategy of individualized, risk based treatment approach. However, there is still a long way to go, as with the currently available adjuvant chemotherapy, radiotherapy, hormonal therapy and molecular therapy the 10 year relapse free survival rates in early stage breast cancer range from 50% to 80%, across various studies and across various risk groups. Indications for these adjuvant therapies, drugs used along with their dosage and duration and techniques employed in radiation continue to be re-defined as newer and newer data comes up.

Another area where role of post-mastectomy chest wall irradiation is being redefined is early stage, node negative TNBC. TNBC patients accounts for about 15% of all types of breast cancers, with a relatively poor outcome after treatment.[8] They are not candidates for adjuvant hormonal and molecular therapy. The only adjuvant therapy recommended in T1-T2, N0 TNBC is chemotherapy. Despite this the recurrence rates in TNBC are high and survival rates poor.[9] Radiotherapy as an adjuvant modality in early stage TNBC has been explored for any benefit in survival outcomes. In a study of 681 patients with stage I-II TNBC addition of radiotherapy after adjuvant chemotherapy has resulted in significant improvement in recurrence free survival (RFS) and OS.[10] After a median follow-up of 86.5 months, 5-year RFS rates were 88.3% and 74.6% for adjuvant chemotherapy plus radiation and adjuvant chemotherapy alone, respectively. Five-year OS were 90.4% and 78.7% for adjuvant chemotherapy plus radiation and adjuvant chemotherapy alone, respectively. The benefit shown is comparable to the benefit of trastuzumab in Human epidermal growth factor receptor-2 (HER-2) positive cases as per the recent 10 year final joint analysis of National Surgical Adjuvant Breast and Bowel Project (NSABP) B-31 and North Central Cancer Treatment Group (NCCTG) N9831 trials presented at 2012 San Antonio Breast Cancer Symposium. This benefit is also in concordance with another study demonstrating the superiority of breast conserving surgery and radiotherapy over mastectomy in terms of loco-regional RFS.[11] Analysis carried out by DBCG on the patients enrolled in DBCG 82b and 82c trials to find out the impact of estrogen receptor (ER), progesterone receptor (PR) and HER-2 status on the benefits derived from post-mastectomy chest wall irradiation in high-risk patients showed that patients with TNBC had relatively low DFS benefit compared to hormone receptor positive patients and no OS advantage.[12] From these studies we conclude that in TNBC patients addition of post-mastectomy chest wall irradiation is more effective (in terms of RFS and OS) in T1-T2, N0 disease as compared to high-risk T3-T4, node positive disease. This stands in contradiction to our current practice of using irradiation in high-risk TNBC and not using the same in early stage, node negative disease. One possible explanation of this paradox is that node positive TNBC is already a systemic disease at outset considering the aggressive biology of the disease, not amenable to control by addition of local radiation. Node negative TNBC is more likely to be a localized disease, which can be better controlled by local radiation.

Thus, we believe that post-mastectomy chest wall irradiation has a role in T1-2, N1 disease irrespective of ER, PR and HER-2 status and also in T1-2, N0 TNBC. It should be strongly considered in these two settings.